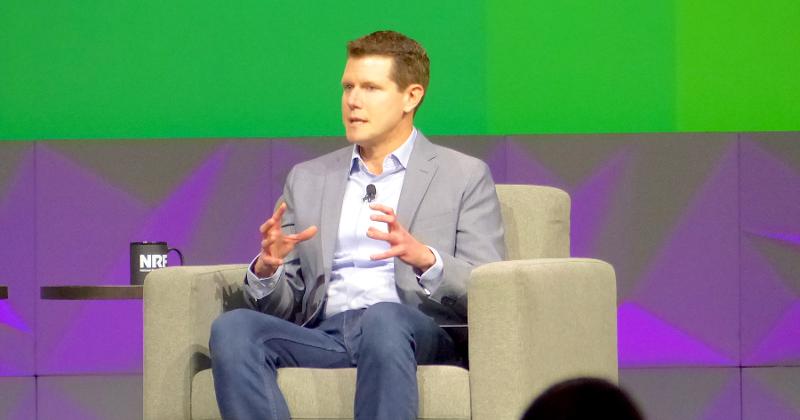 The Amazon-owned specialty grocer currently has dozens of stores in its development pipeline but aims to boost that through an aggressive plan for annual openings, according to Buechel, who spoke at Manhattan’s Jacob Javits Center in a keynote chat with Nick Handrinos, vice chair and U.S. leader for retail and consumer products at Deloitte.

“We are so bullish on our potential to continue to add stores,” said Buechel, who became CEO of Whole Foods on Sept. 1 after serving as chief operating officer of the Austin, Texas-based chain since 2019. “We currently have about 50 stores in our pipeline. We're looking to grow that to at least a hundred. Ultimately, we want to be opening 30 or more stores a year. For us, it’s the ability to serve more customers.”

Whole Foods plans to expand its footprint into new markets and grow its presence in its current market areas, Buechel noted on Monday.

“There are two ways by which we’re going to do that [expansion]. One is we’re going to go to new markets. Next month, we’re opening our very first store in Montana, in Bozeman,” he said. Due to open Feb. 1, the Bozeman location will bring the chain into its 44th state.

“Here in New York is a great example of where we expanded existing markets. Last Wednesday [Jan. 11], we opened our One Wall Street store. It’s an amazing store. We’ve talked about theater of retail. For us, this is like a flagship experience,” Buechel said.

The 42,000-square-foot store, at 66 Broadway, sits in the city’s Financial District and reflects the Art Deco history of the landmark building, including Wall Street-inspired influences. With that location, Whole Foods now has 18 stores in New York City, including 14 in Manhattan and four in Brooklyn.

“One of the things that I love is the original elevator doors are up against the wall behind the south checkout,” Buechel explained. “We’ve got the original mailbox, which is just off of our produce department, and throughout the store are just amazing experiences for customers to engage.”

Whole Foods also is experimenting with various concepts on the brick-and-mortar front.

“The other part that’s so exciting about our growth is we’re looking at new formats on top of it. I can’t share a lot today, but we’ve got a couple of examples that we’ve already done,” Buechel told Deloitte’s Handrinos.

“We’ve got an Idea Market store in Denver, as an example, where we’re looking at ways of creating a more curated selection. We’ve really focused on areas like how we can bring more sustainability to the customer, more offerings around an organic, taking plastic out of the water bottle aisle—so doing things that we believe customers are really looking for,” Buechel explained. “Sometimes customers help us, and we can see how they respond and use that as sort of a test slide. We’re looking at a number of other concepts as well, which today either are physical stores you may not be able to get the real estate we’re looking for, or ultimately new ways that we can serve customers and how we might lay out a store the size and shape, etc.”

Buechel shared Whole Foods’ new strategic plan, dubbed “Growing with Purpose,” with employees in its first quarterly town hall meeting of 2023 last week. The chain opened 11 stores in 2022, most recently locations in Culver City, California; Grand Rapids, Michigan; and Pittsburgh in August, and currently operates 534 stores overall, including 513 in the United States (43 states and the District of Columbia), 14 in Canada and seven in the United Kingdom.

Handrinos noted that Whole Foods has done an excellent job in maintaining its better-for-you value proposition with consumers, especially in an unstable economic environment.

“Our customer really cares about quality standards and the differentiation that we bring to market,” Buechel said. “Customers want to have transparency, and I think one of the things that we do really well is we offer programs that simplify that,” he added. “I look at value from a customer side of things. It’s not just what something costs. It’s the price and the value we’re helping bring to the customer. For us, it’s the homework that we’re doing and the work that we’re doing throughout the entire supply chain that they can feel good about what they're buying.”