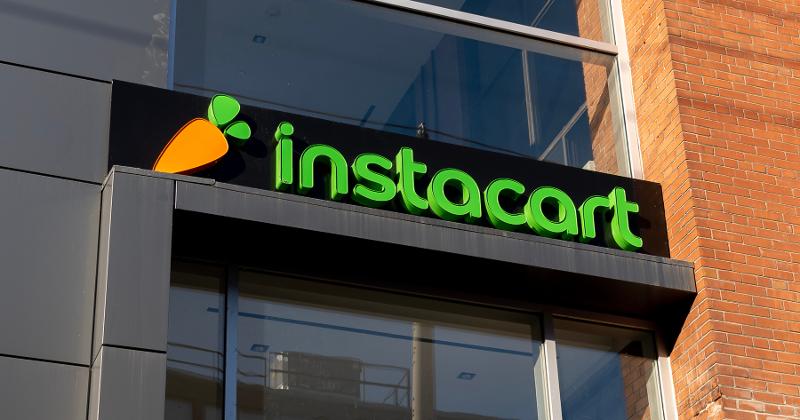 As more and more third-party services move to court the grocery delivery shopper it once had mostly to itself, consumer loyalty to Instacart is on the wane—an effect that could make the cost of online fulfillment come down—according to a new consumer survey.

These are encouraging points for food retailers, who now have more choice and less to lose, according to the investment bank Barclays, which conducted the survey while updating an influential report it undertook in 2019 and from which the comparisons are drawn. The 2019 report concluded that consumer trust in Instacart was in danger of supplanting loyalty to partnering retailers, whose reliance on the third-party tech and delivery platform was described as an “addiction” by the report’s author, Karen Short.

The 2021 survey, however, “shows cracks in the armor given much greater competition in the space,” the report read. “This leads us to conclude that while Instacart continues to exhibit meaningful traction with consumers and still poses an existential threat to many retailers, we are entering an Instacart ‘hangover’ phase during which competitors have gained considerable ground in key areas, and in many cases rank ahead of [it] in terms of the shopping experience.”

The arrival or expansion of new competitors for grocery delivery since 2019—along with pandemic conditions in 2020 that forced many shoppers to explore them for the first time—has worn away at loyalty to Instacart and appears to have strengthened some shoppers’ attachment to the partnering grocer, the survey shows. 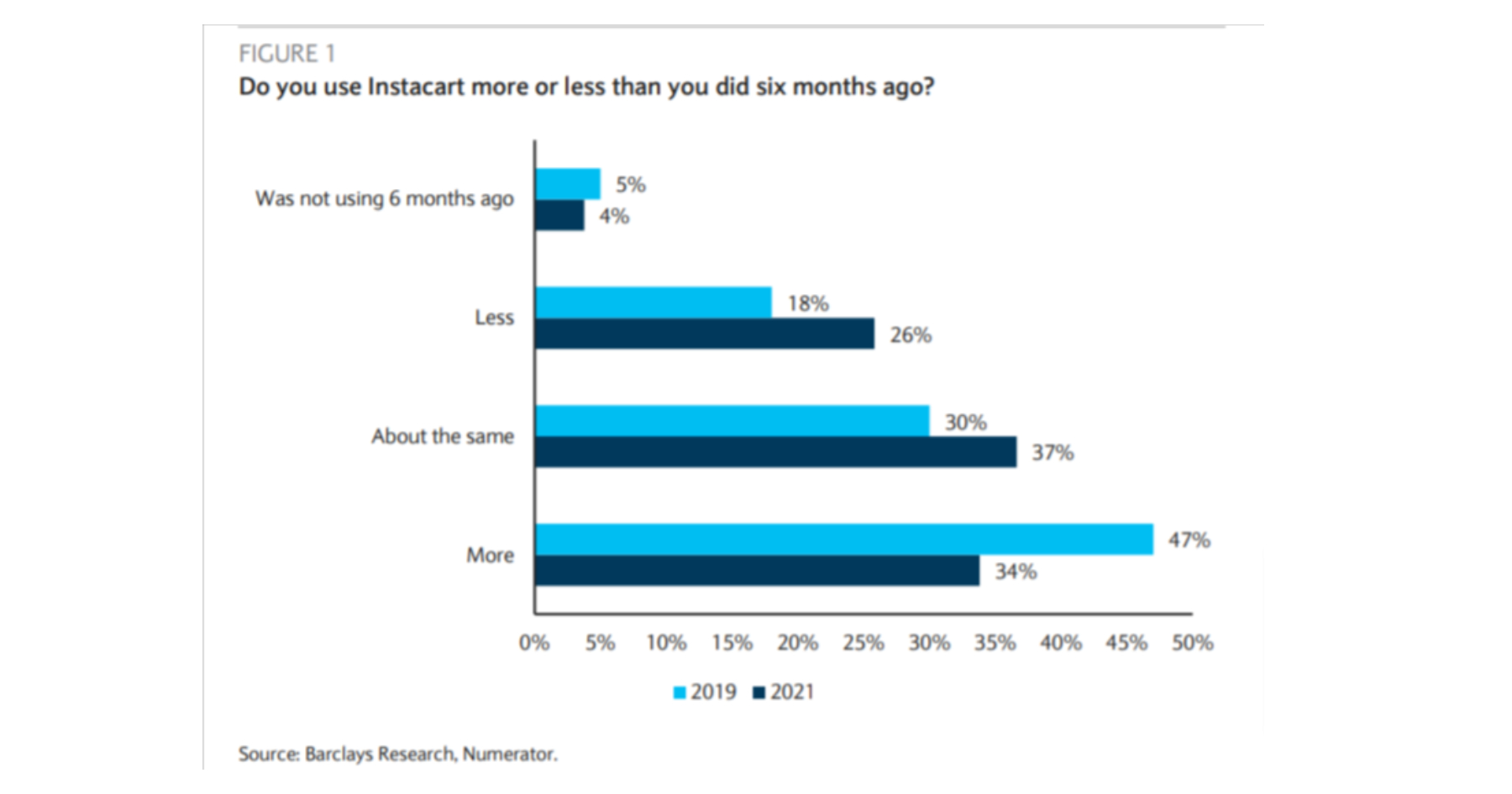 “While Instacart likely grew its user base and sales dramatically during the pandemic, our survey results indicate consumers’ engagement with their preferred grocer improved during that time,” the report said. “However, loyalty to a retailer is still low overall, as consumers are still most interested in convenience and price.”

Could retailers cut the cord with Instacart? Perhaps.

Only 37% of shoppers said they would stick with Instacart if their primary grocer stopped using Instacart in the 2021 survey, down from 43% in 2019. A notable increase was also shown among those who said they would go to a competitor like DoorDash, Uber or Shipt in that event. 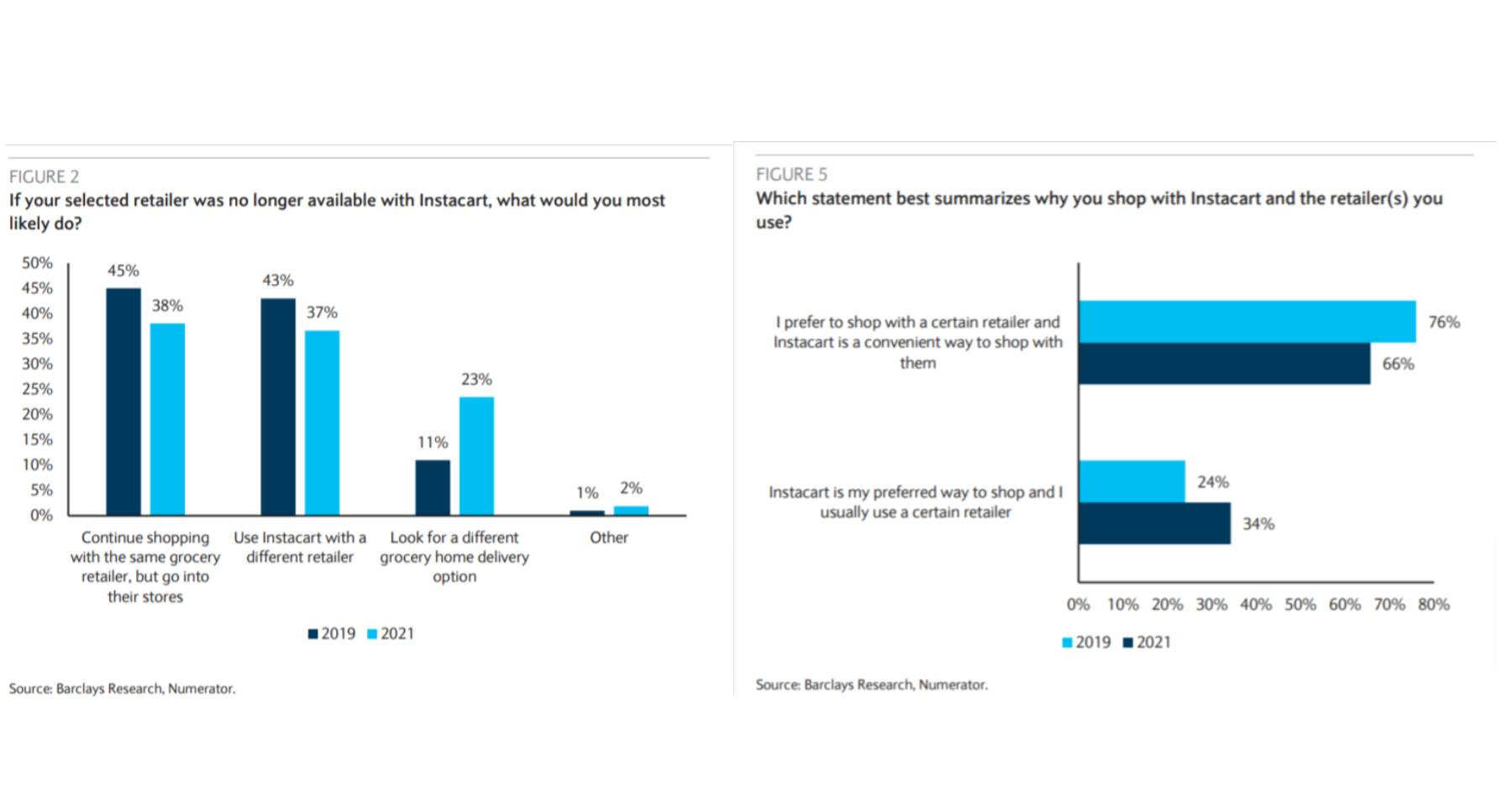 Here, Barclays found shoppers responded best to Walmart (ranked best in product prices and overall price), while Amazon ranked No. 1 or No. 2  in most other categories. Shipt was ranked above Instacart in each category. Instacart generally scored well in each category, but was ranked last in product prices and overall price, Barclays’ research found.

On a net basis (taking the difference between “more” and “less”), Kroger and Shipt were the only services for which respondents had a tendency to shop in stores more often, while respondents to all other services were inclined shop less in-store. Those two services similarly showed the smallest net gains (3% each) in shoppers who said they were using those services more than they did six months ago. Amazon (21%) and Walmart (15%) scored best here. 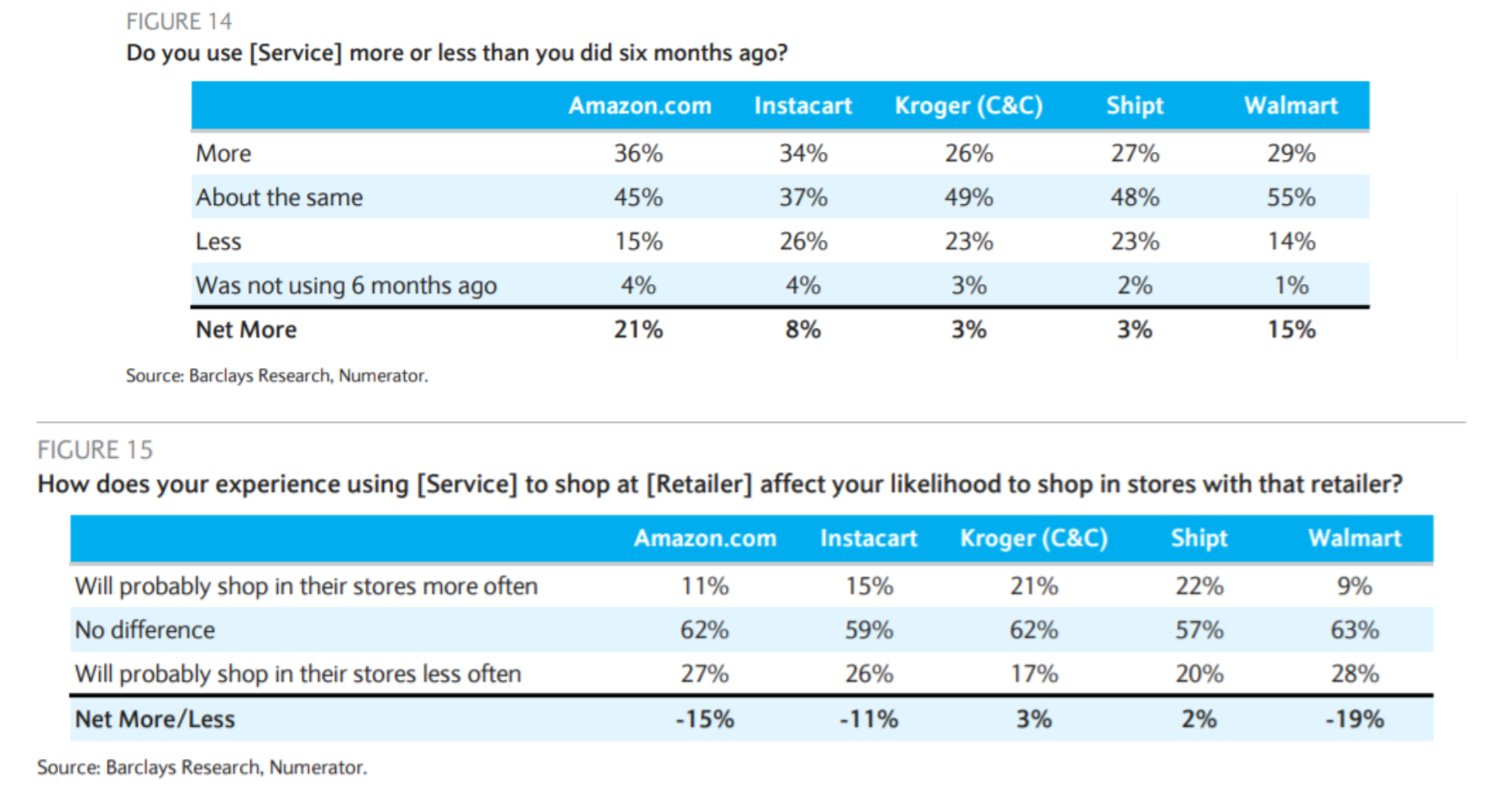 In an “overall” ranking of shopping experience, surveyed shoppers gave Amazon the best marks on five of seven survey questions. Shipt was ranked the second-best service and had the highest ranking in terms of in-stock availability and “saving time/making life easier,” with which it tied with Amazon. Walmart was ranked No. 3 in overall shopping experience, with best results in pricing questions. Kroger followed by Instacart, brought up the rear, the survey showed—but Instacart “generally had good scores on an absolute basis, except in product prices and overall price (including delivery and fees), where it fell well below all other services,” the report noted. 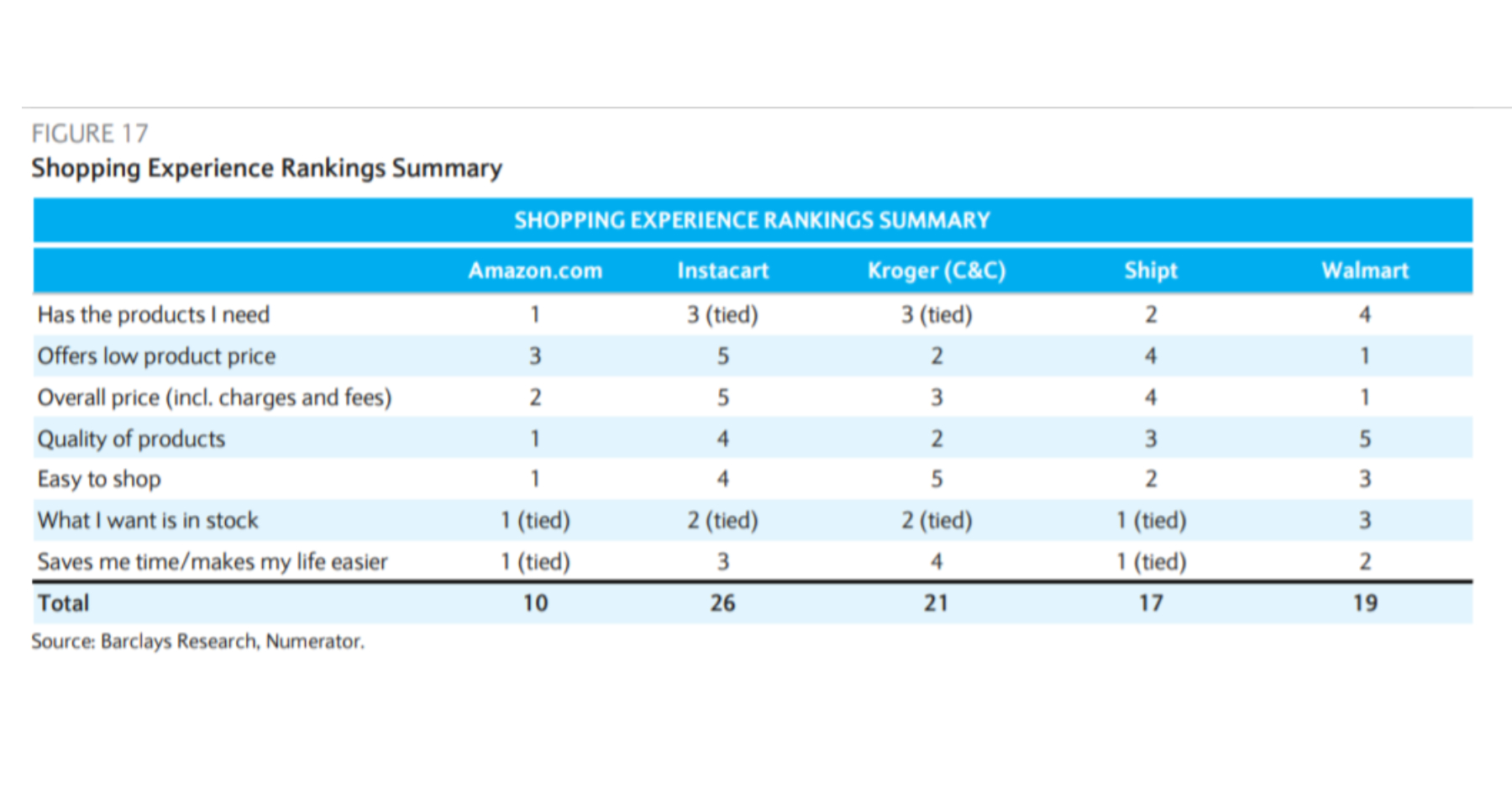