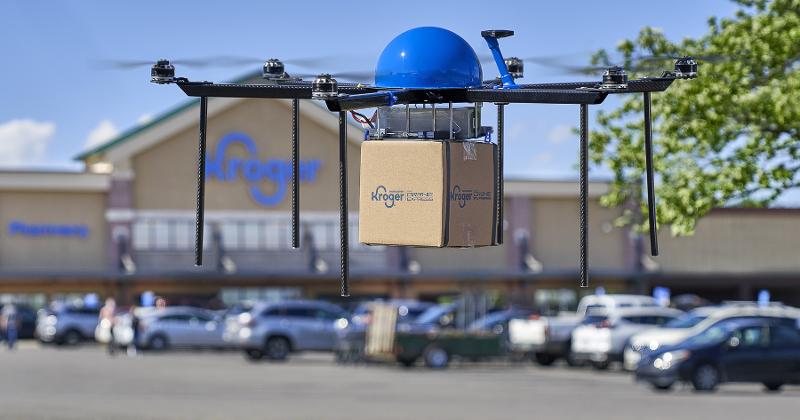 And with that, Doc Brown and Marty McFly zoom off into the future and the credits roll.

As viewers of the “Back to the Future” franchise would discover in the sequel, the time-traveling heroes reemerge in 2015. But had their flux capacitor been set for another six years ahead, they might have taken out a few grocery drones upon reentry.

Not long ago, the notion of local grocery delivery by air seemed a longshot to beat autonomous cars and trucks to the mainstream, but several promising trends are changing the outlook. For one, roads are crowded and dangerous places and many communities are still uneasy about approving robots to join them. That’s opened opportunity for sidewalk buggies and drones to enter the delivery picture, although, they too currently contend with certain drawbacks.

But sources are quick to note it’s not really a race to any single method of delivery, but rather, a pursuit of affordably serving a shopping society that’s increasingly demanding what it wants when it wants it. That’s prompting retailers to examine a breadth of efficient and fast solutions on land, and increasingly, in the sky.

“When you’re up in the air, you don’t have as many obstacles, that’s really the biggest problem with ground autonomous behaviors,” says Beth Flippo, chief technology officer of Telegrid Technologies, parent of Drone Express, a delivery business that has begun testing autonomous delivery by drone to Kroger shoppers in Ohio.

“There’s a lot of obstacles on the ground so you have to test for pretty much everything—pedestrians, cars, branches, anything could be in your way. In the air, not only do you have less obstruction, but you also fly as the crow flies. You don’t have to stick to roads. You can fly at a diagonal directly to your location, which saves an incredible amount of time,” Flippo adds.

“Don’t get me wrong, I believe in autonomous ground vehicles as well, but they have to fit into like an existing infrastructure,” she continues. “Drones surpass that. They are able to fly, and be much faster, and they have no traffic. And none of the things that you have with the existing ground transportation.”

Drone Express and Kroger announced a partnership in May. In its early months, they have been dispatching small bundles of goods from a Kroger Marketplace store in Centerville, Ohio, to “friends and family” with plans in the works to expand to Kroger’s Ralphs stores in the San Diego area later this year. In Ohio, orders for delivery are picked in the store and run out to a trailer in the store’s parking lot, from which they are sent off to the destination on any of three drones on-site. Their flight is autonomous but overseen by an on-site “pilot” as required by the Federal Aviation Authority.

“The FAA prefers fully autonomous flight because you don’t have to worry about somebody on the sticks, if they had a bad day or they needed their coffee,” Flippo explains. “So the drone usually flies by itself. But under the current regulations, they want somebody there just in case they need to call the drone back for any reason, if there’s a manned aircraft that flies in the way of the drone, we always have to yield the right-of-way. These are the things that the FAA wants to make sure somebody is doing with their own eyes before they allow that to be done by the drone itself.”

Kroger’s rival Walmart is another believer in drones. The company over the past year has tested several companies, including a fixed-wing style flyer from Zipline, which is sling-shotted into the air and can shuttle items up to 50 miles before dropping them by parachute. Most recently, the Bentonville, Ark.-based retailer took an investment stake in DroneUp, a Virginia Beach, Va.-based drone operator with which the company tested hundreds of deliveries of COVID-19 tests over the last year.

“The trial demonstrated we could offer customers delivery in minutes vs. hours,” Walmart U.S. CEO John Furner wrote in a blog post. Furner likened the undisclosed investment in DroneUp to a similar support of autonomous car company Cruise, indicating Walmart sees a mix of methods in orchestrating delivery.

Drone Express has put no hard limits on the distance drones can fly—or necessarily on the weight they can carry. Requirements limit distance to “line of sight,” which can vary depending on weather conditions. Flippo says its current fleet of drones are capable of a 15-pound payload, but Drone Express is self-limiting to 5 pounds during its testing phase.

Five pounds—or even 15—is not the size of a typical grocery-store delivery order. And unless it’s 5 pounds of saffron, it may not even meet minimum-order limits under existing methods of fulfillment. But that’s part of the drone’s appeal to retailers, meeting new use cases that were previously impossible to fulfill efficiently. In the meantime, a new class of “micro-grocers” delivering small orders by scooter or bicycle in cities are revealing some consumer demand.

Kroger for its part has advanced some clever use cases it will make available to its customers that are well-suited for the unique advantages of drone delivery—for example, a baby care bundle with wipes and formula; a child wellness bundle with over-the-counter medications and fluids; and a S’mores bundle with graham crackers, marshmallows and chocolate.

“A lot of people right now think this is like some kind of gimmick. But it’s going to be just like it is with any other ground-based delivery. Your product is going to be there.”

And it’s not just speed and efficiency that makes the case: Because drones can deliver to a cellphone signal and not necessarily a fixed address—they can be an especially effective for busy people, delivering for example sunscreen to a beach-goer, the s’mores bundle to an outdoor picnic in a public park, a bandage to a wounded cyclist on the side of a road, or a party gift to an office that would save an evening trip home to collect it.

“Only drones can do that because drones are doing one delivery at a time,” Flippo says. “The problem with trucks, or pizza delivery, has always been, most likely, that guy’s waiting for a whole bunch of pizza orders. He’s not just taking yours. So they have to have routing software. Drones can eliminate all that.”

Further down the road, Flippo envisions a future where these kinds of trips are stitched together in a network of hubs and autonomous shuttlers that would include robot trucks and cars. Continued advancements in technologies, she predicts, will make them more efficient and user-friendly, likening their further development to how apps transformed the cellphone.

“I can see packages being picked up from anywhere,” she says. “I see it being like almost having little kiosks everywhere, and they’ll all be delivery launch sites.

“A lot of people right now think this is like some kind of gimmick. But it’s going to be just like it is with any other ground-based delivery. Your product is going to be there. You’re sick at home and you need a prescription. It just shows up in 15 minutes. And you’re not going to see the drones. You’re not going to hear them as more drones enter the commercial space. There’s going to be a whole industry created in this country to make better motors, to make better props, to make silent technology. And that’s what I'm really excited to see. … People are really going to rise to the challenge.”