Food retailers offering click-and-collect shopping have known long before the coronavirus arrived that they would one day need a better way to orchestrate pickup. Their customers? Maybe not until more recently.

But the contagion has helped to unify both sides. Demand for perceived safer, “contact-free” solutions are meeting unheard-of online volumes, putting additional strain on already costly, high-labor processes for retailers, not to mention new headaches for consumers. That is sparking a search for new solutions.

In the same way self-checkout delivered efficiency benefits for the retailer and convenience for the customer, self-pickup could also be poised for explosive U.S. growth as it addresses convenience and safety concerns for shoppers with efficiency in the last mile, sources say.

Although very few units are currently deployed in the U.S., a variety of young tech companies are pushing solutions already popular in some European countries such as Estonia—compact, unmanned refrigerated lockers using automation to serve up grocery orders in the style of an ATM. These units can be deployed in any variety of locales—store parking lots, drive-up kiosks and community-based hubs like train stations—and integrated into stores, or used as part of a dark-store conversion. Their goal for retailers is reducing expenses at the point of pickup, and providing consumers a convenient and safe alternative to costly delivery.

“COVID-19 has been OK for us, because it’s really woken up the industry,” says Marek Piotrowski, chief marketing officer of Retail Robotics, a Poland-based company now preparing to launch its Arctan grocery lockers with a major food retailer in France, reportedly Carrefour. “One of our partners was just telling us that all the industry needed was a tipping point to cross the chasm and open up the mass market. If e-grocery was just 3% of 4% or 5% of the market as it had been in the U.S., it might not have come. But now, it’s going to a different level.”

Pickup lockers are not exactly a new option in retail. Operators such as Amazon have used them for years to efficiently distribute parcels and integrate the brand in retail units, including its own Whole Foods stores, bridging digital and physical retail. Walmart has rolled out thousands of vertical pickup towers in its Supercenters, giving shoppers the option to retrieve Walmart.com orders in the style of a vending machine rather than wait on a customer service line or have packages delivered to their homes—gaining with them the benefit of more store visits. The pizza chain Little Caesars makes use of “Pizza Portals,” keeping online orders warm at stores until customers drop by and take them.

All of these applications make use of mobile apps generating QR codes or PIN codes to release the doors, assuring pickup customers a fast, contact-free and secure experience, and retailers with a low-cost option to serve them.

Grocery stores, whose wide assortments and multiple temperatures have tended to make the online shopping trip more complicated than most of their retail peers, today are getting more sophisticated solutions powered by space- and labor-efficient robotics and outfitted with chilled and frozen storage. This new generation of lockers are also overcoming engineering and logistic challenges that may have slowed previous deployments.

Bentonville, Ark.-based Walmart, for example, has experimented with a variety of pickup-only grocery fulfillment centers, including an unmanned unit codenamed Ajax at an Oklahoma Supercenter parking lot in 2018. That experiment was abandoned after the unit developed condensation issues that interfered with the operation of its doors, officials said. Its location in the middle of a dusty and windswept Oklahoma parking field was also less than ideal.

The big company has since deployed an evolved unit in Sherman, Texas, known internally as Ajax 2.0 and marketed in the U.S. by Bell and Howell as the Quick Collect XL. This is built onto one side of a Supercenter and can service seven drive-up customers at once, according to Bell and Howell. The same unit, which handles refrigerated and frozen goods, can also be deployed as a stand-alone.

Cleveron, the manufacturer of Walmart’s “Rapunzel” parcel towers, a little less than a year ago debuted a robotic click-and-collect fulfillment solution known as 501. The unit, already widely deployed in the Coop Estonia and Selver grocery chains in Cleveron’s native Estonia, is testing in at least one U.S. location, Cleveron Chief Operating Officer Mihkel Ilp said in an interview. He declined to disclose additional details, however, citing terms of the agreement. 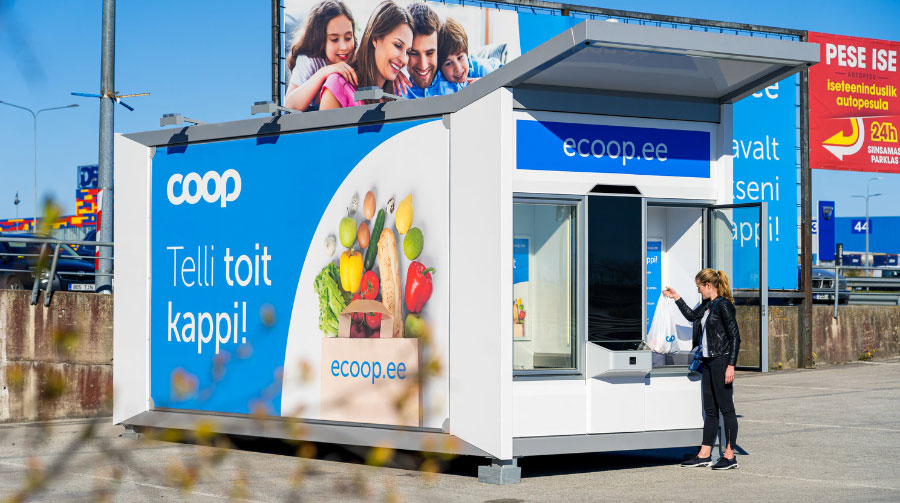 The Cleveron 501 could have the U.S. shopping the Estonian way, offcials say. Photograph courtesy of Cleveron.

The 501, about 20 feet long, is available with refrigerated and frozen storage for 120 totes (totes, also referred to as bins or crates, are the common currency of automated pickup—these are plastic bins, about 23.6 inches wide, 15.7 inches long and 10 inches high). The totes are stored and retrieved using space-efficient robotics, allowing the unit to be about half the size of a traditional refrigerated locker bank storing a similar quantity of goods. The crates are loaded and received at the same walk-up window.

In Estonia, the average order is about 2.4 crates; in North America, the average is closer to six crates, Cleveron officials noted. The unit takes less than an hour to fully load. Ilp says the compact 501 can easily fit in the parking lot of a retailer but can be strategically placed on the routes of delivery trucks or in city centers. The company is at work on larger units to serve bigger average orders but some clients deploy two at a site and a fleet of them to serve a market area as needed.

“Given how much interest we have seen for grocery pickup, it became kind of obvious there were not enough different solutions out there for end consumers,” Ilp said, adding that “home delivery wasn’t really enough for the retailers themselves, because it it’s still today a very costly service. And if retailers have end users whose expectation is to get everything delivered in no time and at no cost, there’s a huge disconnect there.”

Retail Robotics’ pickup grocery robot, known as Arctan, has space for 200 bins and another 28 frozen bins. It receives and dispenses orders through any four drawers, allowing it to serve multiple customers at a time while speeding replenishment, says Piotrowski. These units can be placed inside a physical store but the company is also at work on a drive-thru solution Piotrowski noted would be ideal for the U.S. market.

Myrmex Robotics, based in Athens, Greece, and with U.S. facilities in Santa Clarita, Calif., is approaching self-pickup as one step in a comprehensive robotic solution for grocery retail that also includes microfulfillment, “marshaling” of online orders and automated shelf replenishment, all based on what Myrmex founder and Lead Strategist Ioannis Kanellos describes as a system based on the combination of containers and robotics. He likens the potential benefits of this combination to retailers to the revolution in world exports brought about by “containerization” of the shipping industry in the 1960s. Today, it’s a system of proprietary racks transporting multiple bins by shuttle robotics—what Kanellos calls the common “building blocks” of the solution. Myrmex’s marshaling and last-mile technologies are available now. Its system for microfullfillment and robot-enabled store shelf replenishment are on the roadmap for 2021, he said in an interview. 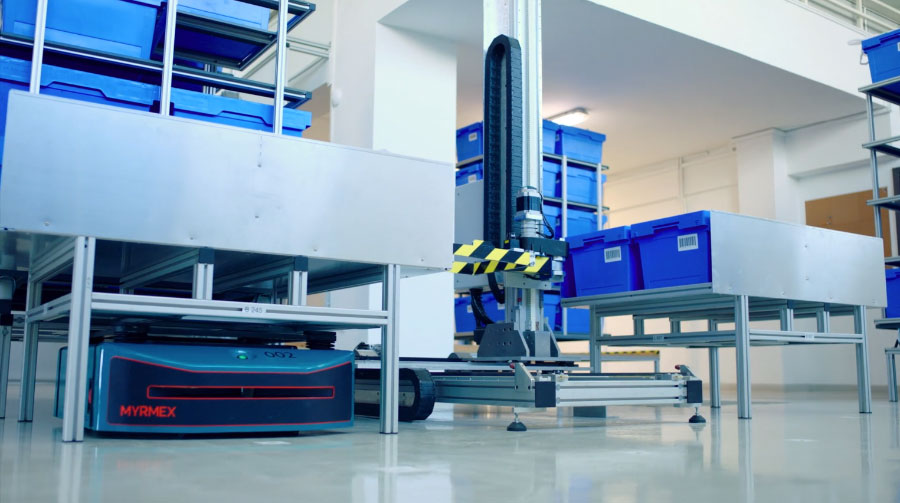 A combination of shuttle robots and proprietary racks serves as the backbone of a comprehensive solution, Myrmex officials say. Photograph courtesy of Myrmex Robotics.

Myrmex’s rack-and-robot system can consolidate and reshuffle orders and can be deployed as part of a store or as part of a dark-store conversion. Myrmex envisions deployment of what it calls its Curbside Pickup System in boxes as small as 280 square feet, with a capacity of 140 bins and throughput of 120 bins an hour, to its largest at 1,110 square feet, with a storage capacity of 520 bins and the capability to deliver 300 bins an hour.

Bill Bishop, chief architect with Barrington, Ill.-based consultancy Bricks Meet Click, says adoption of such solutions has generally been slow in the U.S., in part because consumers haven’t necessarily seen a benefit to them. But that too could be changing as attitudes influenced by the coronavirus rearrange shopper priorities.

“I think they’ll soon accept it when they realize it has the dual advantages of saving them time and eliminating the risk of shopping in store,” Bishop told WGB. “Everything we’re seeing tells us that there’s a significant aversion to going to the supermarket and this will definitely become a viable option, since it is “much better than a trip to the store.”