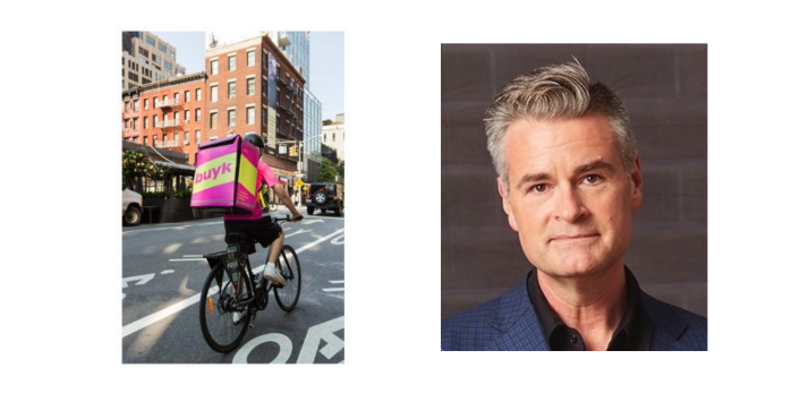 The co-founders of ultrafast grocery delivery provider Buyk are handing off executive leadership of the company. James Walker, previously SVP for restaurants at Nathan's Famous, has jumped aboard as Buyk's new CEO, the company announced Tuesday.

The executive shift comes as Buyk eyes rapid scale-up of its ghost-store-based business, which launched in Manhattan in September. Earlier this month, Buyk announced that it had expanded into three more New York City boroughs—Brooklyn, Queen and the Bronx—as it works toward taking its 15-minute delivery service to other large metropolitan areas across the United States.

Walker is a restaurant-industry veteran, with prior roles at Subway, Baja Fresh and Cinnabon in addition to his tenure at Nathan's Famous. (He's also a culinary-school alum who has studied AI and disruptive strategy at MIT and Harvard, respectively.) At Subway, where he served as VP of U.S. and Canada, Walker helped lead the launch of the company's North America delivery program. At Nathan's Famous, Walker oversaw the opening of nearly 300 ghost kitchens in the U.S. and abroad.

"James shares our vision regarding the future of retail and is determined to help Buyk lead the revolution in this industry," Bocharov said in a statement. "We feel that his expertise and experience in scaling businesses and bringing them to new markets are a valuable asset and totally align with our goal of making Buyk a household name, first in the U.S. and then globally."

Walker, for his part, said he's impressed by Buyk's early success and the track record in the ultrafast-delivery space of Bocharov and Shiskov, adding that he looks forward to helping drive Buyk's fast-growing operations to meet the company's ambitious targets.

In New York, Buyk's competitors include Jokr, Fridge No More and Gorillas. Istanbul-based Getir is expected to join the fray soon after making its U.S. debut in Chicago earlier this month.