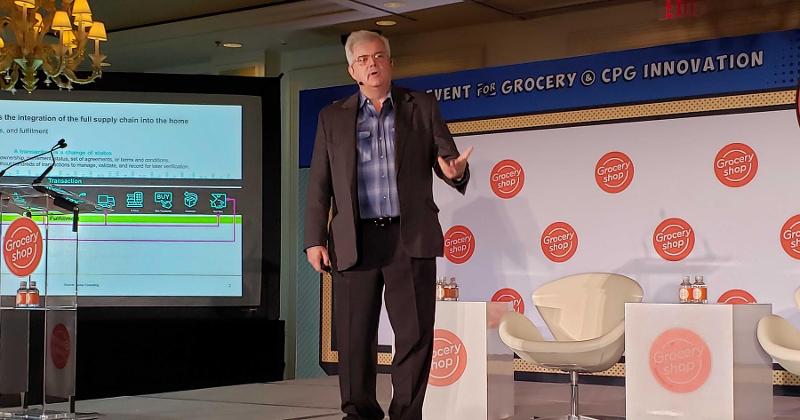 The digital revolution has brought about disruptions to the supply chain that are hidden in plain sight but have wide-ranging implications, Kantar Retail’s Dave Marcotte said in an address this week at the Groceryshop conference in Las Vegas.

The introduction of things such as digital shopping, connected homes, payment apps and ride-hailing technologies in the past decade have come with fulfillment requirements that “broke the system” of a supply chain that over the prior 50 years had been optimized to move goods from manufacturing to the consumer in only one direction, Marcotte said. Today, the supply chain is “not as a linear device, but one with nodes and modules and means of diverting at any point,” he said.

As this has happened, price sensitivity for fulfillment has dropped while strains on the supply chain have increased, Marcotte said. Retailers such as Amazon today are defined as much by their fulfillment capabilities as their pricing: “Their fulfillment model trumps their price model,” he said. This is similarly evident to drivers who no longer have any idea the cost of tolls on highways they drive when billed electronically, he continued.

Retailers and suppliers confronting the new supply chain reality should be aware of their challenges and opportunities, Marcotte urged. The labor shortage affecting truck drivers in the U.S. is also affecting markets in Mexico and Canada, sparking quicker adoption of self-driving vehicles in markets that allow it. The arrival of 5G technology will put this emerging tech “on steroids,” Marcotte said, although it could be as much as a decade before that technology is fully rolled out.

Other alternate forms of fulfillment may not work out, Marcotte said, as they are likely to encounter more safety scrutiny than existing technologies.

“If I take a full-size car and drive into a wall at 60 miles an hour, that’s the explosive equivalent of a half a stick of dynamite. If I take a 100-pound drone with a package on it and drop it 100 meters, that’s a stick and a half of dynamite,” he said. “Our political systems in multiple countries have a certain amount of corruption, but they really hate killing voters. If you expect to see drones delivering pizza in the future, don’t wait up. It won’t happen.”

In the meantime, an aging population and rise of the internet will combine to make smart homes a more relevant target for some retailers.

“Think of the house taking care of you. Think of the population [that] is aging rapidly,” Marcotte said. “People will want to stay in their houses, and people who stay in houses are willing to accept the idea of a smartphone that surrounds them. The strategic direction of Best Buy, and to a certain degree Walmart, is based on the idea that aging people will be in smart homes and smart homes will be a part of shopping. Are you prepared to market to a home? Are you willing to create a fulfillment model that involves a smart home, not a smart individual?”