Will Glaser is best-known—to this point–as the guy who invented the groundbreaking streaming radio platform known as Pandora. His newest venture, the computer-vision aided cashierless shopping technology called Grabango, has a different beat but could be Pandora’s flip side.

“I’m not self-aware enough to have realized this at the time, but it occurred to me afterward that they are sort of the same company,” Glaser said about his inventions in an interview with WGB at Groceryshop, held Sept. 15-18 in Las Vegas. “Both of them are my personal problem: I didn’t like what was on FM radio, and I hate waiting in line at stores. They both started on a yellow pad in my living room, although one living room was in San Francisco and one was in Berkeley, Calif. The solution to both is a pile of dirty mathematics, and I'm a dirty mathematics guy. And in both cases you build a technology team to make it work and you give it to consumers, most of whom I'll never meet, but who have my same problem.”

Can the hits keep on coming? Glaser is convinced they will, and because America consumes groceries more voraciously than music, it just might hit bigger. The company’s technology is now running at two stores—one at a Giant Eagle store near Pittsburgh, another at a supermarket on the West Coast—and is in development with at least two other partners.

Grabango is promising them what Glaser called a “double win”—a means to provide customers with new conveniences and retailers the opportunity to make back their investment behind more satisfied shoppers and ancillary benefits of a computer vision-enabled store. Glaser focused primarily on shrink reduction through associated ways of flagging shoplifters, particularly “sweethearting” employees and serial shoplifters who shield theft behind small purchases at the register.

Though there are no shortage of companies pursuing computer vision as a means to aid checkout—Amazon Go helped to launch the trend, which counts a number of well-funded and promising startups, including several looking to make their own impressions at Groceryshop this week—Glaser said the Grabango offer differs from Amazon Go stores in numerous aspects, including the elimination of friction at both the entrance and exit of stores, supported by an agnostic approach to how shoppers in equipped stores would pay. “Any legal tender will do,” he said. 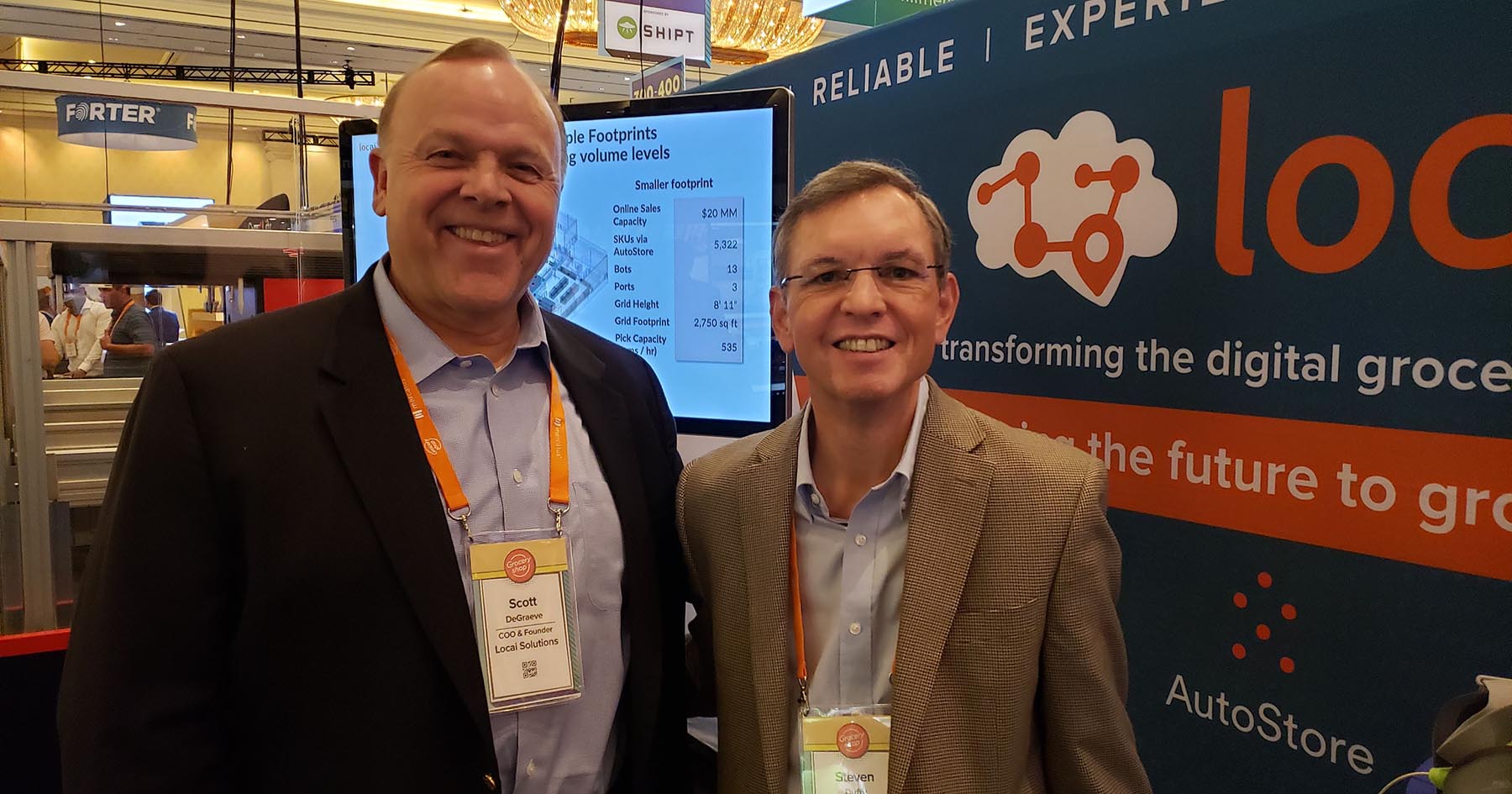 This, he argued, makes Grabango a viable solution for retrofitting wider-serving existing stores, and it can be utilized for units up to 100,000 square feet carrying as many as 100,000 SKUs.

Grabango utilizes proprietary cameras and computers mounted in rails along the ceiling that watch all the movements in a store, learning item locations, movement and prices. Speaking during a Groceryshop panel, Glaser described the company as a “video-to-receipt generator,” which can deliver a basket value to the cashier upon arrival at a checkout. Discrepancies between Grabango’s total and the scanned total could flag shoplifters, he said.

“The losers here will be shoplifters,” Glaser said, “along the store across the street that’s still got a 20th century cost structure that’s no longer competitive, and to add insult to injury, they are inheriting those displaced shoplifters.”

The prospect of retrofitting existing grocery stores behind futuristic and fanciful systems powered by artificial intelligence, machine learning and computer vision was a major theme among presenters and a topic of debate among attendees at the second annual grocery retail technology show.

In the same panel discussion as Glaser, attendees also heard from Richard Schwartz, CEO of Pensa Systems, who talked up a novel approach to inventory management supplied by a tiny drone that can fly through store aisles seeking stock-outs and other inventory issues.

Describing the contraption as “flying whiffle balls” Pensa’s drone is a “roaming pair of eyes” that was designed to see the shelf from more perspectives than stationary cameras might. “It can see from different angles and perceptions—just like you do,” he said. “It’s as if there were 100 cameras on the shelf.”

Schwartz said the unit, which has been tested at various retailers and brands, can address the “billion-dollar black hole” of inventory goofs, estimating that 1 in every 10 items can be misplaced on a shelf, triggering lost sales and profits. The drone can also recognize shoppers, and not unlike a skillfully delivered whiffle ball, can dart outside their reach, providing a less bulky solution to inventory scanning than, for example, a full-sized robot, he said.

John Lert, founder of Alert Technologies, made a pitch for retailers to remake their stores in a hybrid combination of micro-fulfillment and experiential retail. His Novastore concept would be powered by Alert’s Alphabot robots, which would pick preordered center-store items while shoppers explored their own fresh products.

Lert envisions the Novastore can be pulled off in a box of 17,000 square feet, as long it as it was 45 feet high to account for the proprietary Alphabot robotic system, which operates in a three-dimensional grid. Such a store, he said, could have Trader Joe's-like size but Wegmans-like volumes.

On the show floor, a team of exhibitors consisting of the retail software firm Locai, the architecture company Cuhaci & Peterson, and the warehouse robotics outfit Autostore was demoing a similar kind of offering. In a signal of the speed at which demand for intelligent stores are growing, the concept grew out of an informal conversation between the parties at the National Grocers Association meeting in February, and a concept was whipped up between them over eight weeks this summer, Steven Duffy, VP of grocery for Cuhaci & Petersen, told WGB in an interview.