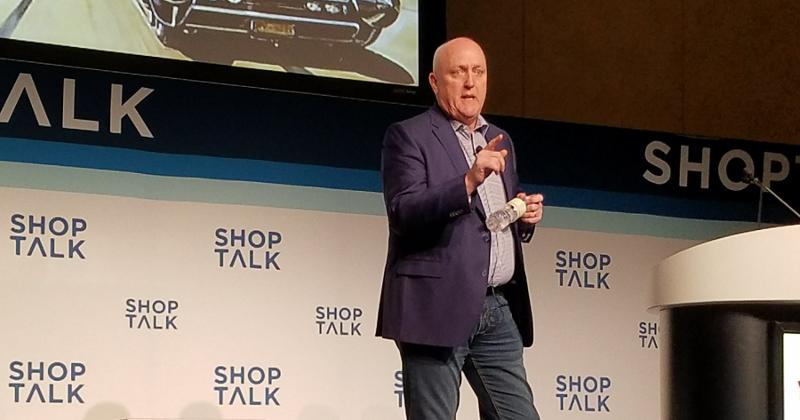 Instacart’s pursuit of more efficient means of conducting shopping on behalf of consumers has quietly recruited powerful new allies, including former Walmart executive Mark Ibbotson, who is working on behalf of the tech company as it investigates potential partners that could operate automated e-commerce fulfillment centers, sources told WGB.

Also new to Instacart’s team is Oana Castu, a former Lyft and Tesla employee who was named director of next-generation fulfillment at Instacart last month, a new role at the fast-growing tech platform, a company spokesperson confirmed. The San Francisco-based tech company separately this week announced that high-profile executives from Facebook and Spotify were joining its board of directors as it beefs up its personnel and governance ahead of an expected move to publicly list its stock for the first time.

Ibbotson was an influential leader at Walmart U.S. who helped to spearhead the chain’s online grocery program and other technology and operations initiatives that were instrumental in the big company’s turnaround between his arrival in 2015, and last January, when he departed the company as its EVP of realty and central operations. Ibbotson formerly was chief operating officer of Asda, Walmart’s since-divested U.K. stores division. At Walmart U.S., Ibbotson led integration of its real estate and central operations teams, reinvented a store remodeling program, and introduced virtual reality training at Walmart Academy programs teaching his “One Best Way” initiative of standardized processes. Ibbotson also introduced a program of Fresh Operations Managers supporting improved practices in fresh food, and pioneered a variety of novel on-line fulfillment schemes, including automation in the form of “Rapunzel” towers, parking-lot pickup lockers and in-store microfulfillment.

Sources said it was not clear whether Ibbotson had been hired in an executive role by Instacart or was essentially serving a high-level “gig” as a consultant on this project specifically. Ibbotson did not immediately respond to a request for a comment, and the company declined to confirm details.

In any capacity, Ibbotson’s involvement with Instacart is a sure signal of its seriousness as it pursues more efficient alternatives to its customary practice of using contracted gig workers to pick incoming orders at stores as personal shoppers. This has helped Instacart scale quickly but is widely viewed as imperfect, coming along with inventory challenges at stores, associated error rates in fulfillment, and compromises to the in-store experience that have become more acute as volumes soared with the coronavirus. It’s also a relatively expensive solution, resulting in product upcharges and/or service fees that can interfere with consumer value perception at partnering retail brands, sources say.

These issues have led grocers—whether they are working with third parties or not—to pursue solutions using “dark stores” or purpose-built e-commerce warehouses themselves, including many with robotic storage and retrieval systems, which sources say can support faster and lower-cost fulfillment and deliver considerably better inventory visibility, because they are subject only to direct customer orders and not walk-in shoppers. That Instacart was pursuing such solutions—apparently with eyes on building as many 50 in a year—was reported first over the weekend by the Financial Times.

Instacart currently delivers from some 45,000 stores across 600 retailers in the U.S. and Canada, so moving even a portion of those to more efficient picking strategies would represent a substantial task. Typically, a small local fulfillment center or dark store outfitted to enable picking can tackle the volume of about 10 stores, sources say.

In leading Walmart’s robotics and automation strategy in stores, Ibbotson helped to craft the partnership with the robotic microfulfillment company Alert Innovations, which installed its first robotic storage system inside a Salem, N.H., Walmart store in 2018. Sources say he is currently investigating various strategies and companies on behalf of Instacart, with the idea his recommendations—which are not clear at this time—could also help bring along Instacart’s partnering retailers. That Instacart might consider acquiring a microfufillment technology company was also not out of the question, sources speculated, citing Amazon’s acquisition of the fulfillment technology Kiva Systems a precedent. Instacart’s valuation, at $30 billion according to reports, provides more than enough fuel should it choose that route, sources noted.

“He brings a lot of credibility to the role,” one source, who asked not to be identified, said of Ibbotson.

“A smart move by Instacart,” said another. “At Walmart, he was a guy who if he called, you got off your other calls to take.”

Instacart officials have framed their pursuit of new technology as a way to better service partnering retailers but it is unclear at this point what retailers make of the offer. Many are rushing to develop their own e-commerce capabilities, including technology-enhanced warehouses and proprietary store-picking apps. Some offering both Instacart and in-house solutions are encouraging shoppers to make transactions on their own properties, and have been encouraging pickup over delivery as a solution for customers, in part because they prefer that their shopper relationships and data stay in their ecosystems and not escape to third parties. At the same time, the Instacart option brings order volumes and presence among marketplace solutions that has made Instacart something of a join-or-die proposition. That presence has also become increasingly important to retailers as e-commerce has grown in popularity among shoppers.

Sources also point out that very few of Instacart's partners possess the technical know-how and financial wherewithal to develop effective e-commerce technologies and practices on their own. “They’re a technology partner, and so do things that a technology partner should,” one source said of Instacart this week. “Not all retailers are good at building apps.”

Some sources maintain worries that the tech company could eventually come for retailers, having already made gains in areas like trade funds and customer data through its partnerships. Its estimated $30 billion valuation is already many times larger than many of its partners. The company, however, has repeatedly pushed back on that notion. “Instacart’s entire product and model is predicated on being a chief ally to our retail partners,” a spokesperson said this week.

Castu joined Instacart in January following two years at ride-share company Lyft, according to LinkedIn. Castu is a previously participant in a leadership development program at Tesla and formerly was a Goldman Sachs analyst.

Separately this week, Instacart announced that Fidji Simo, head of the Facebook app, and Barry McCarthy, former chief financial officer for both Spotify and Netflix, have joined the company’s board of directors. Simo brings years of experience leading global teams at scale and building beloved consumer products; and McCarthy brings more than three decades of experience in business operations and management, finance, accounting and corporate governance.

"We're excited to welcome Fidji and Barry to our board of directors during this important time for Instacart as we continue to serve as a lifeline for millions of customers, more than 500,000 shoppers and hundreds of retailers across North America," Apoorva Mehta, founder and CEO of Instacart, said in a statement. "Fidji brings extensive experience developing mainstream, global products that are used by billions of people everyday. Her passion and instincts for building products people love will be invaluable as Instacart continues to focus on creating the best online grocery shopping experience for customers. With Barry, we're adding one of the brightest finance minds in the world to our Board. He has unparalleled insights on operational execution and building at-scale, sustainable businesses, and will be an important advisor as we focus on Instacart's next chapter of growth.”

Instacart has made several high-pedigree moves to bolster its executive ranks as it preps for a public offering. Facebook’s Asha Sharma begins this month as the company’s new chief operating officer. Nick Giovanni, a former Goldman Sachs’ dealmaker, began a new role as its chief financial officer last month, and Christina Hall joined as its chief human resources officer from LinkedIn.

The company said it intention was to build its corporate team by more than 50% in the first half of this year.