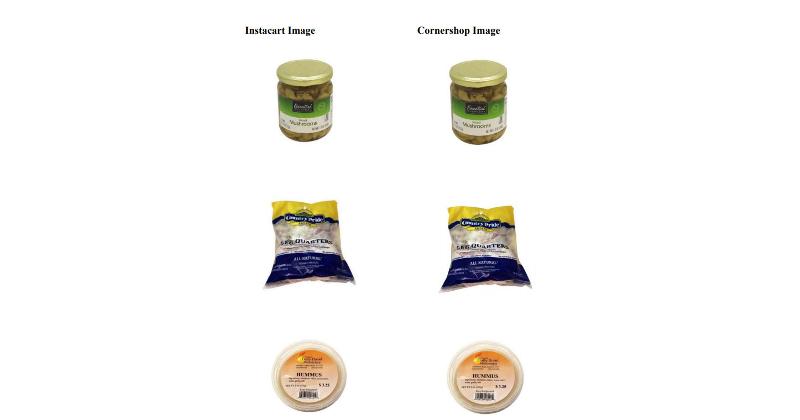 Instacart has filed suit against its upstart grocery shopping rival Cornershop, alleging the latter raced into business in part through illegally stealing thousands of product images belonging to Instacart.

The suit, filed in the U.S. District Court in Eastern Texas, alleges Cornershop “scraped” product images from Instacart’s catalog from so-called edge servers in Texas where cached images were stored, then renamed the files as they appear on its app to cover up the activity. Instacart further alleged the activity was carried out with “striking audacity,” citing job postings from Cornershop seeking engineers with the ability to scrape such information.

Images of certain products provided in the complaint appear identical. Many of the photos appearing on the Cornershop app, Instacart alleges, were proprietary copyrighted images taken as part of Instacart’s Mobile Photo Studio.

Launched in Chile in 2015, Cornershop has been described as a “South American Instacart” that earlier this year launched U.S. service in Texas and Florida. Most recently, Cornershop integrated with the ride-hailing app Uber to facilitate deliveries.  Uber reportedly moved last year to acquire a stake in Cornershop for $459 million.

Instacart in a blog post said it filed suit after Cornershop ceased to comply with a cease and deist demand from Instacart.

In a statement, the company said, “Today, Instacart filed a lawsuit against Cornershop after the company failed to comply with a cease and desist demanding it stop stealing our catalog and using our misappropriated intellectual property. The lawsuit makes clear that Cornershop is engaging in a systematic effort to illegally steal Instacart’s proprietary catalog while attempting to conceal that theft for its own commercial benefit. In light of the egregious behavior exhibited by Cornershop, we believe this legal action is necessary to protect our business and retail partners from Cornershop’s ongoing theft.”

Cornershop did not immediately respond to a request for comment from WGB.

Sylvain Perrier, president and CEO of Mercatus, said in a email comment to WGB that the dispute in effect “is the first real salvo in the fight for digital grocery dominance in North America between two tech heavyweights,” and points to the importance of  safeguarding digital assets.

“In its bid to quickly enter the U.S. market, Cornershop seems to have cut corners by not striking any deals with grocery chains to handle their delivery,” Perrier added. “These latest accusations are another sign of the heated competition to come in an industry that has exploded with interest in the last few months as consumers flock to online shopping.”