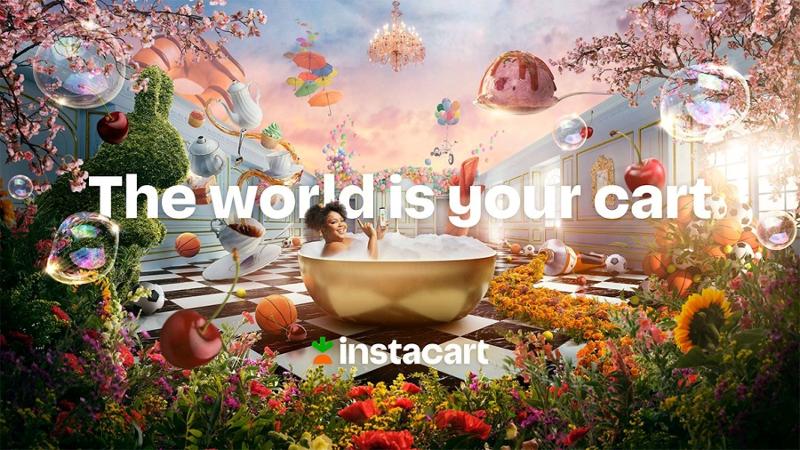 “The World is Your Cart” campaign includes a one-minute ad featuring Lizzo in a bubble bath, adding items to her Instacart cart. The soundtrack is a remix of the artist’s new single “The Sign.”

On Sunday, Instacart is taking out a full-page, center spread ad in The New York Times, featuring Lizzo.

That will be followed by a significant presence that day at the 2022 MTV Video Music Awards, in which the Lizzo ad will make its TV debut following an onstage performance by the singer-rapper-flutist. Instacart is an official sponsor of the awards show.

"The World is Your Cart," featuring Lizzo

“A shoot where I get to sit in a bubble bath and shop all day? Sign me up, Instacart,” Lizzo said in a statement. “This spot is so dynamic, and people will see me shopping and imagining what each item could lead to, from a desertscape of Takis—which are always in my cart—to a rain shower of cherries … I hope that my cart inspires people to get all the stuff they love or maybe even try something different.”

It’s a marketing play that has been used by restaurants for years. McDonald’s collaborated with pop star Mariah Carey last holiday season on a themed “12 Days of Deals” menu, part of the burger giant’s “Famous Orders” platform that also included Travis Scott, Saweetie and BTS. Chipotle Mexican Grill frequently adds limited-time menu items created by athletes and celebrities, as it did in a partnership earlier this summer with the U.S. Women’s National Soccer Team.

The Carts feature is Instacart’s way of sparking discovery among its shoppers, much as in-store shoppers are nudged to drop impulse buys into their actual carts while strolling the aisles.

“In addition to capturing these possibilities across our new creative platform, we’re making them a reality by offering consumers the chance to discover new things across the Instacart app—so you can browse, be inspired and turn that inspiration into reality by getting your items delivered to your door in as fast as an hour, CMO Laura Jones said in a statement.

Instacart said it is also working with more than 5,500 CPG brands to create new “inspirational shopping experiences” across its app via several ad formats, including brand pages, shoppable display and shoppable video.

Instacart on Thursday also announced the debut of Instacart Tastemakers, an affiliate network for creators, publishers and developers so they can make money from purchases made by their audiences on the platform.

A food blogger could, for example, share a recipe and direct readers to order the ingredients from Instacart, sharing a cut of each sale.

“Over the next few months, we’ll share more ways for our partners to monetize their content by leveraging the full Shoppable Recipes ecosystem that we are creating for brands and retailers,” Instacart said in a statement.

Instacart, which offers same-day delivery and pickup services from more than 75,000 stores in 13,000 cities, is reportedly planning to go public by the end of the year. The company confidentially filed documents for an IPO in May with the Securities and Exchange Commission. Instacart’s revenue climbed 39% during its second quarter, to $621 million, compared to the prior year, according to a recent Wall Street Journal report.