Meijer is moving its Shop & Scan mobile shopping checkout program to 23 stores in the Chicago area and Northwest Indiana after a successful test in the retailer's home state of Michigan.

Now in 54 Michigan stores, the Shop & Scan app has been downloaded more than 1.1 million times, having reached 12,000 downloads when it was available in only seven stores in April 2018. More than 80% of local Meijer customers repeatedly used the Shop & Scan app. 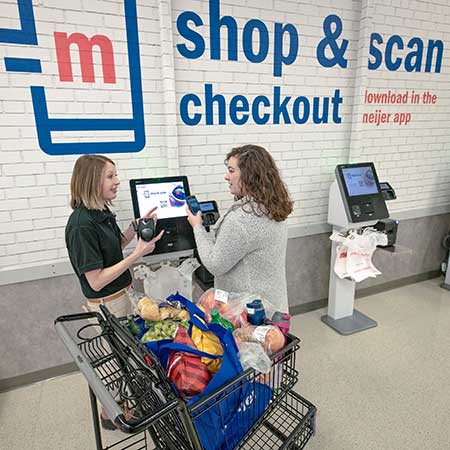 The retailer had revealed in April that the technology would go companywide and would be available in all 235 stores by the end of last summer, but the rollout appears to be a little slower to the uptake than anticipated. Meijer has not disclosed details on its plans for future expansion, but said it would continue adding new Shop & Scan enabled stores throughout the year.

The holdup may have been due to customer feedback-driven improvements, which include an integrated shopping list with the ability to clip available mPerks coupons for items scanned.

The technology, which competes with the likes of The Kroger Co.'s Scan, Bag, Go program and Sam's Club Now, enables users to scan barcodes on items with a mobile app, bag their own items and scan their phone at a self-checkout lane.

Gerald Melville, Meijer regional VP, said customers are responding well to the simplicity of the scanning and bagging process, which allows them to save time and avoid lines.

"We're all challenged by time and busy schedules, so Shop & Scan allows customers the opportunity to truly be in control of their shopping trip, from the moment they walk in our stores to the minute they walk out," he said.

Included in the launch are all stores throughout the Chicago area, including in Aurora, Bloomingdale, St. Charles, Elgin, McHenry and both Bolingbrook locations, as well as five Northwest Indiana stores, including in Merrillville, Valparaiso and Michigan City.