Connected food consumers are increasingly being prepped for the possibilities of autonomous vehicles (AVs).

In a September 2019 survey of U.S. drivers who also own a smartphone, Adobe Analytics found that 10% are using current in-vehicle technology—namely, their car’s voice assistant—for food delivery or takeout purposes. And 40% of smartphone-owning consumers would like to be able to purchase a self-driving car. When asked which activity they are most excited to do in an AV, the most popular choice was eating or drinking. It outpaced working, reading or sleeping.

While AVs seem a futuristic concept, several pilot programs are underway that are slowly inching the transportation technology forward. Alphabet’s Waymo launched a self-driving taxi fleet in Phoenix and has racked up more than 10 million miles of real-world driving over the past decade, plus 10 billion miles in simulation testing. Uber has made “tens of thousands” of trips with its fleet of 250 AVs. And Tesla was poised to debut full self-driving capabilities by the end of 2019. 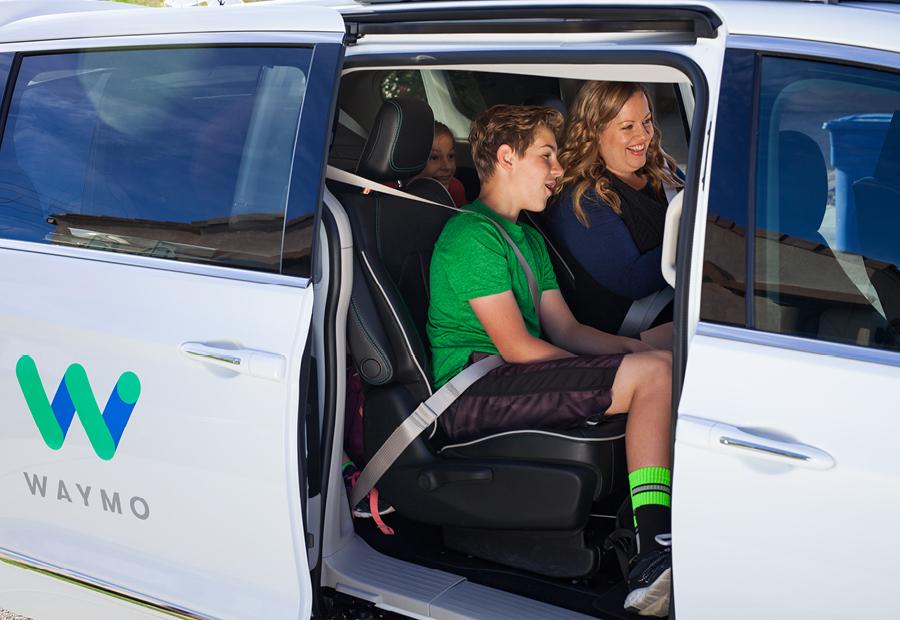 Meanwhile, major automakers such as General Motors, Ford and Toyota are dedicating billions of dollars to develop AV technology.

Grayson Brulte, an innovation strategist and co-founder of AV consultancy Brulte & Co. LLC, Miami, is bullish on the technology’s potential. For foodservice brands, it will be a massive opportunity to cement customer loyalty and expand the purchase occasion. The challenge, however, will be to “own that space.”

AV usage will be differentiated by the experience. “Can I get certain dining [experiences] there?” Brulte says. “Can I purchase a product that’s only available when I’m riding in that vehicle?”

AVs are expected to be priced at a premium because of their technology. Should the technology adopt a subscription model—in which a business owns a fleet of AVs and consumers pay a subscription fee to use the vehicles—it could pave the way for new loyalty programs. Brulte points to American Express’ membership rewards or airlines’ frequent-flier programs as models for such an approach.

“The vehicle subscription will be able to add a lot of really interesting exclusive things because there can be hyperlocal [elements], and the vehicle can take you there,” he says. “For instance, if you have a subscription for X amounts of rides, or you have a certain class of subscription, perhaps you can get invited to a dinner with a famous chef as a perk each quarter.” This could also relieve operators of liability concerns when serving alcohol because the AV will control transportation to and from the dining location.

In this vein, a hotel—for example, in California’s Napa Valley—could offer guests an AV subscription with their stay and connect to local food and beverage experiences. “[The AV] can safely take you to the wineries, you can have wine tastings, and it could have a little wine storage in there,” Brulte says.

Beyond being transported to a restaurant or other food destination, there’s also the opportunity to dine inside the AV. Imagine the items that consumers typically do not buy for the road because of the difficulty of eating them in the car—anything that requires a utensil and hand-eye coordination, such as spaghetti, an ice cream sundae or a steak. AVs can provide operators with a completely new dining occasion that extends way beyond grab-and-go.

“The biggest thing for convenience stores is it takes the focus off portability,” says Bob Derian, partner with The Business Accelerator Team, Phoenix, and a food industry veteran. “When you remove that from the equation, it opens up things you can eat with a fork and knife, such as fresh bowls. … It would really help get more food out the door.”

Perfecting that dining experience may be challenging, of course. A 2019 study by the University of Michigan’s Transportation Research Institute raised the real challenge of preventing motion sickness in AV passengers.

Gary Goralnick, CEO of shopinride, Los Angeles, holds two patents on technology that enables in-ride purchases and advertising. The tech, which is set to go into pilot in 2020, will connect a passenger’s smartphone to the GPS directions in an AV. A brand can engage with the passenger through an ad in social media and make them an offer. If the consumer accepts the offer—such as special pricing on the purchase of a value meal in the next 30 minutes—the shopinride technology would communicate with the AV’s GPS to direct the vehicle to the brand’s nearest location.

Or if a passenger is engaged in an activity in the AV—watching Netflix, for example—a nearby food operator can receive their location and activity information, then advertise popcorn or a dispensed beverage for immediate purchase and pickup.

Goralnick owns commercial real estate and appreciates brick-and-mortar’s challenge in connecting with the disruptive power of AVs. He says operators should consider AVs as a “movable computer” that can extend the impulse-purchase occasion.

“When you’re in a self-driving car, you can get it as soon as possible,” he says. “It will tell you where a product is, and the car can take you. ... It can enhance brick-and-mortar, really.”

Brulte sees AVs becoming a “content hub.” “When consumers have the ability to relax, they’re going to enjoy content in the vehicle,” he says, dismissing surveys that suggest consumers would work in AVs to be more productive. Brulte envisions screens embedded in the AV’s windows, on which passengers can interact with content and shop. “Augmented reality will become very big in vehicles,” he says.

For brick-and-mortar operators, the question then becomes infrastructure: Do they have a dedicated autonomous pickup lane or nonconsumer-facing access for AVs?

Brulte lives in one of the test markets for Whole Foods Market’s Amazon Prime Now fast delivery service. Prime Now delivery shoppers are competing with regular shoppers for aisle space and time in the checkout, he says: “It’s a mess.” Having a dedicated interface for deliveries and AVs would relieve those issues.

Of course, fully autonomous vehicles—or Level 5 autonomy, as defined by the Society of Automotive Engineers—have several hurdles to jump before becoming reality.

Most experts believe fully autonomous vehicles are decades away from becoming a reality. Brulte, who believes the United States is at least 25 years away from AVs having a significant presence in major metropolitan areas or suburban commuting corridors, points to the need to improve autonomous technology, establish federal safety regulations and win public acceptance.

Regardless, he argues that consumers must be the ones ultimately driving the development and design of AVs and their usage.