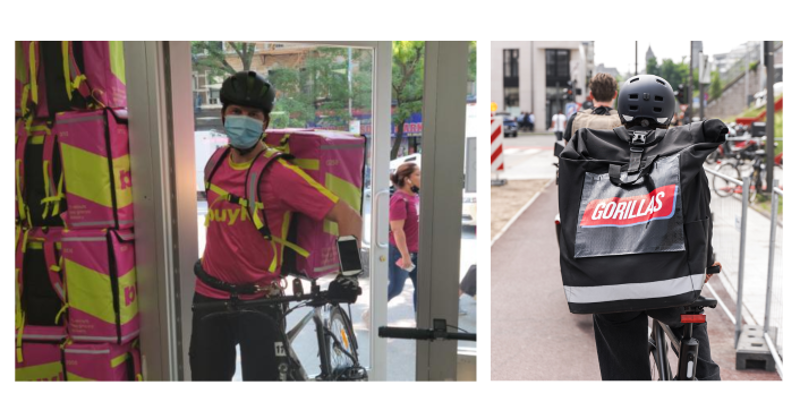 Some online-only "ghost grocers" promising delivery in 20 minutes or less are taking a page from their older, conventional-grocery counterparts, rolling out their own private labels and touting their hiring of deeply experienced industry professionals as they seek to outmaneuver one another and surge ahead in a crowded field.

Both Philadelphia-based Gopuff (an oldster in the field, having launched in 2013 as a hookah delivery service) and New York City-based Buyk this week announced the launch of private-label lines featuring snacks and pantry essentials.

Buyk's private-label assortment, which debuted quietly in December, currently includes bread, coffee, ice cream and candy; Buyk said in a news release that more items are being added weekly and that it's looking for private-label goods to account for 40% of its product mix by the end of 2022.

"We are confident that this ever-expanding private-label lineup will quickly become a fan favorite in New York, Chicago and across new cities as we continue our expansion," Buyk's recently installed CEO, restaurant industry veteran James Walker, stated in the company's news release.

Buyk also announced an exclusive partnership with famed butcher Pat Lafrieda that will have Buyk offering customers an assortment of premium beef, poultry and other meat products starting in February.

Meanwhile, Berlin-based Gorillas, which hit New York streets in May 2021 and raised almost $1 billion in a Series C investment round that wrapped last fall, this week announced it has hired a chief marketing officer. Luanne Calvert, whose 20 years in marketing and advertising includes a brief stint at Walmart and three years at Google, will lead Gorillas' global marketing team.

European rival Getir, which like Buyk added service in Chicago late last year and recently joined the instant-delivery fray in New York, now is seeking to raise more than $1 billion in its next funding round and is aiming for a valuation of $12 billion, Yahoo Finance reported this month. (By comparison, Gopuff was valued at $15 billion in July 2021.)

Elsewhere in online grocery, Farmstead—not an ultrafast player, but offering grocery delivery in as little as one hour—announced that Chicago will become its fifth market, joining the San Francisco Bay Area; Charlotte, N.C.; Raleigh-Durham, N.C.; and Miami. Service will begin in Chicago and nearby suburbs early this year, Burlingame, Calif.-based Farmstead said late last week; a waitlist for as many as 1,000 prospective customers is open. Farmstead touts that more than 70% of its customers eventually sign up for weekly deliveries and can get discounts on their most frequently ordered items through the company's Refill & Save delivery service.