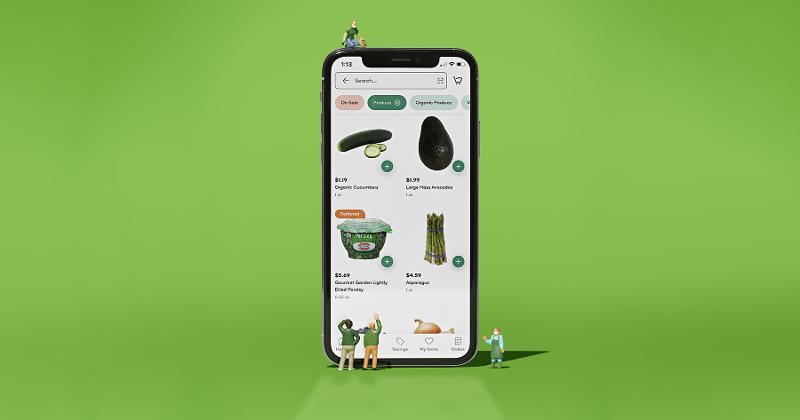 Supermarkets saw unprecedented sales during the beginning months of the pandemic, including increased e-commerce sales. In April, online grocery sales were up 300%; that has since slowed to 200% in early June, according to Rakuten Intelligence, which analyzed sales at 34 companies, including grocery delivery service Instacart, The Kroger Co. and Amazon’s Amazon Fresh operations.

Prior to the pandemic, online sales were averaging about 3% of sales for grocers and that increased to nearly 50% for some grocers, says Doug Baker, VP of industry relations for FMI–The Food Industry Association. E-commerce has settled to about 25% of store sales on average, he adds, with retailers predicting about 15% of online sales going forward after the pandemic. Such rapid growth saw retailers struggling to reallocate labor or simply find enough labor to fill orders, especially during a time when in-store sales were also surging.

John Ross, CEO of IGA in Chicago, adds that many retailers had feared that e-commerce was not a profitable service for them, but consumers have changed how they are shopping online and are now adding alcohol or shopping for whole meals instead of just the occasional pantry stock-up items. Those unprofitable fears are now largely unfounded. “That means we can now afford to think about our labor models differently,” he says. “It may be smarter to think about e-commerce as a marketing expense rather than focusing on the labor expense.”

Robots may provide yet another solution. Ahold Delhaize has introduced Marty, a robot that cleans up spills, checks prices and looks for out-of-stocks. It plans to have Marty operating in 500 stores. Giant Eagle introduced a robot named Tally that also scans prices and out-of-stocks. Woodman’s Markets, an employee-owned retailer with 18 stores in Wisconsin and Illinois, recently introduced robots to roam its stores.

For grocery workers who fear their jobs will be replaced by robots and automation, they don’t have to worry, says Tim Rowland, CEO of Badger Technologies, makers of the robots in Ahold Delhaize and Woodman’s locations. “These are untenable tasks that now the robot can make tenable,” he says. The robots perform tasks that often fell by the wayside as human employees were pulled away to more customer-facing tasks.

The endgame for the robots, Rowland adds, is to make the human jobs easier and faster by supplying pertinent information. “We think the robot’s job will be to generate a replenishment list so that when the human starts the shift, they know exactly that aisle seven needs more Pepsi, aisle eight needs more snack chips,” Rowland says. As the robots become more multifaceted in the duties they can perform, they will become more attractive to retailers, and likely become fairly commonplace within the next 10 years, he predicts.

In short, the grocery industry will always need human labor; however, it may not be what it once was.

“I believe fundamental changes are required and we were headed toward them in the industry already,” Baker says. “Retailers were looking for ways to automate certain parts of the store so that they could take that human labor and actually put it back into the store to deal directly with the customer and create more of an experience.”