Eight Giant-Carlisle and Stop & Shop stores this week are welcoming a new co-worker as Ahold Delhaize’s test of autonomous robots proceeds to the pilot stage.

The units, provided by Badger Technologies, will assist stores doing everything from checking  inventory and price integrity to alerting  managers to broken mayonnaise jars in the aisles. These capabilities should help stores more efficiently attack costly out-of-stocks, while providing labor savings and improving audit and compliance operations, according to Tim Rowland of Badger, who gave WGB a demonstration of the unit at the National Retail Federation’s Big Show in New York this week. 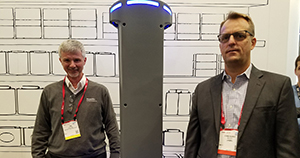 Standing about seven feet tall – and outfitted with googly eyes and given a name tag “Marty” by a Giant-Carlisle store as part of a two-store testing phase launched late last year – the Badger robots could be in as many as 500 Ahold-owned stores this summer, Rowland said. They utilize internal cameras capable of scanning entire shelves for out-of-stocks, reading price tags, and is patched in to supply chain and planaogram systems, allowing it to generate and prioritize reports addressing operational issues.

“Floor inspection is just a huge labor drain,” Rowland said. “You've got an associate doing it in every store, every hour, and it takes them 45 minutes. Its roughly a full-time job. And then you have the situation where the person isn’t available and the floral guy has to do it, or the produce guy and suddenly the store is terrible. So it's very operations oriented.”

Rowland said Ahold officials – who worked with Badger’s board as it developed the concept – said floor inspection was the first item on its agenda that automation could solve. They also were adamant that the technology not add additional infrastructure, he noted.

That sentiment was echoed by Jason Breazeale, Ahold’s senior manager of innovation, speaking in a separate panel event at the NRF show. Breazeale described the organization as “moving fast to change the culture of innovation," but with respect to value. “We don’t need a quarter of a solution then have to go out and develop the rest of it ourselves,” he noted.

At the NRF’s Innovation Lab – an area of the big trade show set aside for products and technologies transforming retail – exhibitors displayed items like robots deployed for warehouse throughput; a robotic shopping cart that can self-navigate a store based on a customer’s shopping list then escort them to their cars; and a shopping-cart mounted camera that inventories shelves while shoppers traverse the aisles.

The latter concept, developed by Focal Systems, is currently being piloted in some ShopRite stores, said Chris McCrae, Wakefern’s manager of retail logistics. 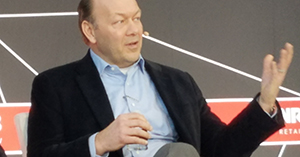 “Our challenge is, how do we keep the high-moving promo items on the shelves,” McCrae explained. “We have department managers and others responsible for walking the aisles and looking for the voids. But $15 an hour, that's an expensive proposition. We actually have a lot of people walking up and down our aisles -- the consumer. With Focal Systems, we're crowdsourcing that information.”

Meetings with attendees and exhibitors gave a palpable sense that retailers are moving quickly to adopt technologies that can aid efficiency and digital skills in a grocery industry led by Walmart and influenced by Amazon. That portends more robots, machine learning devices, and cloud-based solutions that will work for the shopper and the retailer both inside and outside of their stores.

“We really seem to have reached a tipping point in the retail’s industry’s comfort with these kinds of technologies,” Frederic McCoy, SVP of Jabil, parent of Badger Technologies, told WGB in an interview.

CEO Andy Winans  of PCMS, a provider of commerce technologies for retailers, described advantages of a cloud-based suite of products – what he called "unified commerce” -- in the current environment. “If you've ever done online shopping, you know that the pricing and discounts on the website are different than than the pricing and discounts you might find in the store,” he explained. “What we have is one set of services that unite them both.”

PCMS this week added personalized shopping capabilities to its commerce suite, allowing retailers to send location-based promotions in stores and integration with social networks outside of them.