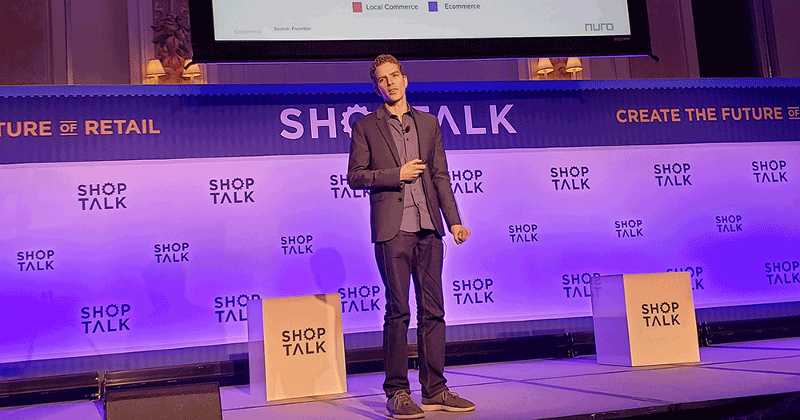 An experiment delivering groceries by robotic vehicle is proving a bigger hit than even its inventor imagined, with implications that could change society.

Dave Ferguson, co-founder and CEO of Nuro, said the company’s proprietary robots, which in December began making deliveries from a Scottsdale, Ariz., Fry’s store, was earning Net Promoter Scores well above that of grocery brands, including its Scottsdale delivery partner, Kroger.

Net Promoter Scores (NPS) rate brands based on the likelihood that they would be recommended to a friend by subtracting the percentage of “detractors” who would not recommend the brand from “promoters” who would. The figure is said to be an indicator of loyalty and growth potential.

“This was an experience that taught us a huge amount; for a technical company to learn what good service looks like,” said Ferguson while speaking this week at the ShopTalk conference in Las Vegas. “It also taught us  how the public is receptive or not to an e-commerce vehicle, and what we found is that people love the service. … People are really pumped about using this.”

Kroger separately this week said it would utilize Nuro in a new market to be announced.

The enthusiastic initial response to the Fry’s experiment is also an encouraging indicator of robotics’ potential to solve real problems for society and businesses beyond supermarkets, Ferguson said. “Our mission as a company is to accelerate the benefits of robotics in everyday life and we’re working very aggressively to do that," he said.

Ferguson said that 87% of U.S. commerce is still executed locally and most of that is done by shoppers using personal vehicles. “If you look at all of personal vehicle trips taken in the U.S., 43% of them are shopping or running errands. That’s the equivalent of 60,000 lifetimes we spend in cars. To us, that seems like an enormous waste of time," he said.

Reducing those figures, he said was a “magical goal” for Nuro, and could be accomplished by robotics taking over local errands typically executed by car, including grocery, general merchandise purchases, dry cleaning and take-out food pickup.

“The 60,000 lifetimes we spend in the car doing errands every year, and the 30,000 lives we lose in vehicle accidents every year—we believe these are very worthy goals,” he said. “We have very strong partners and we’re looking to scale up aggressively this year in both partners and vehicles.”