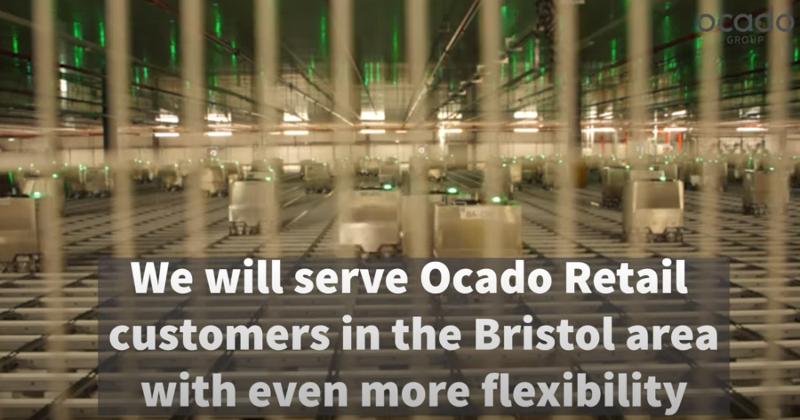 While The Kroger Co. prepares to share details of the massive automated online grocery fulfillment center that “soft-opened” earlier this month in Ohio, a preview of a forthcoming unit now under construction in Michigan has opened under Ocado Group’s watch in South West England.

The 150,000-square-foot distribution center in Bristol, U.K.—the first so-called “mini-CFC,” or customer fulfillment center, in the Ocado ecosystem—is meant to extend automated capacity from larger CFCs to wider geographies, and to serve denser areas with shorter lead times, said Ocado, the British tech company that acts as a retailer in its home country and a technology and logistics partner to retailers elsewhere, including Kroger with whom Ocado Solutions has an exclusive U.S. agreement.

The Bristol facility is the very same model under construction in Romulus, Mich., for Kroger. The Cincinnati-based retailer announced that facility’s construction in September. Of the nearly one dozen announced sites where Kroger and Ocado are building together, the 135,000-square-foot Romulus unit is by far the smallest and is expected to be the fastest to come to life, with an expected opening by next summer.

The project will support 250 jobs, whereas other announced projects contemplated up to 400 jobs per site. It is being built alongside an existing distribution center that serves Kroger’s store business.

“Grocery boardrooms worldwide are wrestling with the question of how to build online capacity that not only meets the growth in demand they have seen in the past year but that also serves that demand profitably and flexibly in the long term, with a better customer offering than competitors,” Luke Jensen, CEO of Ocado Solutions, said in a statement.

In Bristol, the facility has the capacity for over 30,000 orders per week. That’s considerably less than its giant sisters, which are capable of more than 200,000 orders. Its storage grid can stock up to 50,000 products, similar to larger CFCs.

Kroger officials have said its partnership with Ocado would take several forms, including large, medium and small facilities, and said Ocado would also begin providing software and solutions for orders picked in stores.

Is Zoom Ready for the U.S.?

In a conference call this week discussing Ocado Group’s fiscal first-quarter results, its executives also received any number of questions about its “need-it-now” service known as Ocado Zoom. In contrast to the CFCs primarily servicing scheduled next-day delivery, Zoom makes available a smaller range (about 10,000 items) at slightly higher prices and smaller baskets (about 35% to 45%, officials said) than next-day solutions that can be delivered to customers on the same day they order. The first—and still only—Zoom facility in West London is delivering orders in an average of 34 minutes, though officials said they have 12 sites under consideration in England and are in talks with international clients on a commercialized version for them.

Zoom sites are capable of annual sales in the range of 15 million to 25 million British pounds in sales—(about $21 million to $35 million U.S.), CEO Tim Steiner said.

“We've got a commercial proposition that we can market now,” Steiner said, according to a Sentieo transcript. “So we’re talking through a number of our international clients as well as Ocado Retail about building Zoom sites. And the critical thing for us is to build sites that are scalable, that offer long-term estimate, positive economics, both for the client … but also for the Ocado Group in terms of provision of the service. So we want to go out there and help our clients to go out there with the best immediacy proposition.”

Steiner said Zoom sites take advantage of its larger, automated peers by receiving inventory that has picked from them, “so they’re able to have a much more efficient supply chain [and] inbound operation, lower waste, and higher levels of stock availability, which will amount to several hundred basis points of operating cost advantage over an alternative,” such as immediacy offers picked from stores.

Ocado said its revenues grew by 40.4% in the three-month period, marked by effects of a renewed COVID lockdown in the U.K.

The earnings call included a tense moment when a participant levied a barrage of complaints and allegations at Steiner, referencing among other things a data breach, a fire at a facility and “dishonesty” from executives. “We disagree with pretty much everything you've just said,” Steiner replied, before moving to another question.