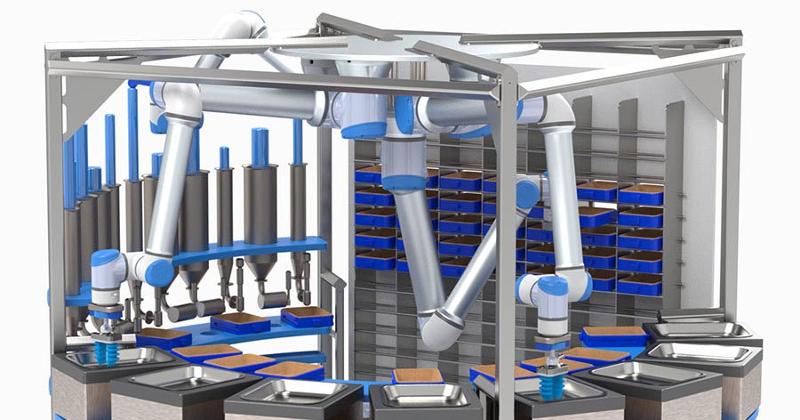 A company that uses robots to assemble customizable, fresh meals to go has received new investment—from a robotic retailer.

Ocado has led a new seed investment in Karakuri, the companies said. Karakuri is pioneering a robotic machine known as DK-One, which the company says can make 360 meals an hour—or one every 10 seconds—combining up to 48 ingredients in precise portions. Intended to be used on-site for grocers and restaurants, it plays into consumer trends for personalized nutrition and convenience while providing labor, distribution and ingredient savings for retailers.

Ocado is a U.K. retailer that has pioneered robotic picking to support what it says is a superior financial model for online grocery. Its Ocado Solutions division is partnering with Kroger on a rollout of robotic e-commerce warehouses in the U.S.

As part of its agreement with Karakuri, Ocado said it intended to take delivery on the machines to support its Ocado Zoom same-day service later this year. It will also provide partners with “innovative answers to the challenges of building a strong and profitable food delivery business,” Karakuri said in a release.

“Consumer eating habits in and out of the home are changing rapidly as demand increases for healthier options that match specific dietary requirements. This growth in menu personalization is putting huge pressure on restaurants, cafes and other food retailers. These providers have historically relied on identically mass-produced meals to maintain their profit margins,” said Karakuri CEO and co-founder Barney Wragg.

“By using robotics and machine learning, Karakuri’s systems provide localized micro-manufacturing within an existing restaurant, retail or commercial kitchen," he continued. "Our systems prepare personalized meals on-site in real time to the exact requirements of each customer. At the same time, our technology aims to minimize food waste, packaging and distribution costs and all of the associated environmental impact.”

Tim Steiner, CEO of Ocado, called Karakuri, “potentially a game-changer in the preparation of food to go.”

Karakuri said the funding round, which totaled 7 million pounds or about $8.9 million U.S., also includes investment from Hoxton Ventures, firstminute capital and Taylor Brothers, and would be used to further develop the technology and expand its team for global growth.