If Amazon’s purchase of Whole Foods Markets in 2017 was the fireworks show that set off a new race to conquer online grocery, its deal five years before that to acquire the robotic material handling company Kiva Systems was a slower burning fuse that ultimately will blow up bigger.

That’s the view at least from Bedford, Mass., the headquarters of the technology firm Berkshire Grey.

“Amazon sort of set the bar for what was doable and what wasn’t doable,” Steve Johnson, chief operating officer of Berkshire Grey, told WGB in a recent interview. “Amazon proved robots in supply chain work. Now, it’s not even a question of, ‘Should I do it?’ ” 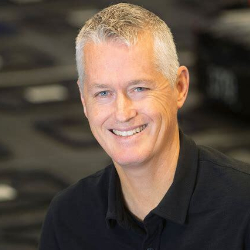 That they will is among the notions lifting the profile of Berkshire Grey, a robotics firm focused on the opportunity to turn the supply chain from cost centers into strategic edges for its clients, which include giants such as Walmart, Target, TJX and FedEx and dazzling robotic solutions that range from warehouse reinvention to in-store microfulfillment. The company is flush with support through a successful SPAC acquisition that last month landed it on the Nasdaq exchange, and fresh off a $23 million order with a global grocery chain. (Johnson declined to identify the client, citing the strategic nature of the investment).

There is plenty of movement among others in the space as well: Zebra Technologies last month announced a deal to acquire Fetch Robotics, a leading warehouse and fulfillment center automation company. And Walmart said it was to begin a large-scale warehouse automation project with Symbotic, the Wilmington, Mass.-based logistics technology firm associated with C&S Wholesale Grocers CEO Rick Cohen. These firms, along with a rash of microfulfillment solutions, are fighting for what they see as a big opportunity in supply-chain infrastructure as the industry adjusts to the digital age and chase the advantages of looming competitor Amazon and its Kiva warehouse backbone (since redubbed Amazon Robotics).

In fact, according to Berkshire Grey, only about 5% of warehouses are automated today, and 90% of picking in them is still done manually, leaving an estimated addressable market of $280 billion between warehouse labor spending and material handling costs. Its potential clients range well beyond the grocery industry, Johnson said, but share similar pain points in that their infrastructure was developed prior to the digital revolution, which itself has brought new cost pressures and a need for speed to the forefront. In the meantime, the labor shortage has heightened the need to adjust.

“There’s multiple reasons to do it,” said Johnson. “If you’re a grocer and you are wanting to do online groceries in the back of the store, how are you going to fill those orders? You’re already challenged with finding people to help you, right? So that’s a big one. … We had a grocer come in just recently and we were like, 'How’s hiring going?' And it’s tough. They told us they had a job fair, actually added really significant sign-on bonuses and bumped the hourly pays up and they literally got two people at it.”

The “enterprise” approach taken by Berkshire Grey—available in cap-ex model or a robots-as-a-service offering—provides a broader set of solutions, he added, than the “point” solutions offered by some competitors in the micro space. In warehouses, the move from conveyor belts to mobile robots is a strategic play that could, if necessary, change the orientation of a warehouse on the fly.

Making this kind of change is accomplished through a quick reprogramming of the software running the units. Berkshire Grey’s hardware includes what Johnson described as highly developed cutting-edge technologies such as robotic arms that can pick individual items from totes and place them into bags.

“The holy grail of robotics has always been picking, because if you think about it, automating your [mobile] fleet is tough, but that’s more about navigation. You need to know if something’s in front of you, left or right. So you have to have a plan, a path and all that. Fleets of robots is infinitely harder,” he said.

“In picking, you have depth perception, motion planning and sensing: How deep is that tote? Is it heterogeneous items? Are those grapes, or are they marbles? Are they plums, or are they baseballs? Those are all things that we are able to pick.”

The automation allows businesses to operate 24/7 to support evolving buying habits and transform operations in distribution centers, back-of-store and stand-alone microfulfillment facilities. Back-of-store automation also enables store employees to continue to provide high-quality service to traditional store customers even while the store supports the new online order streams. This is particularly important in the wake of the pandemic, which accelerated the growth of e-commerce for the grocery industry.

“Ordering groceries online became a habit for many during COVID-19. Driven by this and the convenience of online ordering, our customers need rapid fulfillment of online orders done in an efficient way to meet a range of consumer demands—at the same time our customers need to ensure that the right goods are always on the right shelves at the right times in the store,” said Pete Allen, general manager of grocery and convenience for Berkshire Grey. “Berkshire Grey’s IER grocery picking solutions provide the grocery industry with the speed and scalability that customers demand while positioning grocers to boost margins and capitalize on the continued changes in the market.”