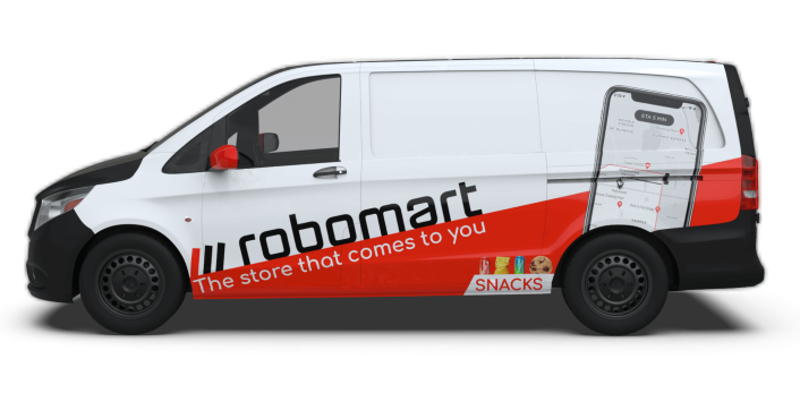 Robomart, a mini-mart on wheels that customers can hail in the style of an Uber and spontaneously shop without checking out, this morning is to announce the launch a platform allowing partner retailers to deploy fleets of mobile branded stores, providing a delivery model exponentially faster than e-convenience players like GoPuff while helping them expand their delivery volume and coverage areas, Robomart co-founder Ali Ahmed told WGB.

The platform, which Ahmed said he would further detail in a presentation at this week’s Groceryshop conference in Las Vegas, cuts out costly picking time by bringing the entire store to the shopper, who in turn can pick their own goods from it upon the mini-mart's arrival. An RFID-based, checkout-free system allows consumers to take their selected products from the vehicle and walk away.

Tests of Robomart mini-marts in the Los Angeles area earlier this year resulted in average shopping trips of about nine minutes, Ahmed said, with the fastest end-to-end deployment in less than two minutes. Consumers are charged a small fee for summoning the vehicle.

The Santa Monica, Calif.-based company said it would be accepting reservations for its platform on a first-come, first-served basis, with deployments beginning in early 2022.

Robomart describes the platform as turnkey solution to help retailers reach consumers faster and manage nearly every aspect of the operating model. Retailers can decide which of their products to feature as SKUs within the scope of each Robomart type; determine and set pricing of their products; create personalized, full-vehicle branding; and select from available operating zones in the Greater Los Angeles area in which to deploy.

Utilizing restocking stations in each zone, Robomart will manage all product stocking, tagging, scanning, quality control and replenishment. Retailers will have access to a reporting dashboard to observe sales data and analytics.

Initially conceived as a self-driving van and at one time slated for a branded deployment with Stop & Shop that was scuttled by issues winning approval for such a vehicle, Robomart has since recast its solution behind customized delivery vans.

Robomart said the launch of its platform follows a successful partnership with REEF, the largest operator of mobility and logistics hubs and neighborhood kitchens in the U.S. As a result of the success of the initial deployment, REEF has expanded the scope of its agreement with Robomart, and as the Platform’s first retailer, will be deploying an additional fleet of units across Los Angeles.