Continue to Site >>>
Edit
John Lert, founder of Alert Innovations, speaks before a backdrop of his "Novastore" concept; Photograph by WGB Staff

Robotic micro pick centers—a technology that existed only in blueprints a year ago and only in a handful of U.S. stores today—holds more promise than simply reducing costs of picking and fulfilling online orders. Utilized to its fullest capabilities, they can make online grocery more profitable than its brick-and-mortar counterpart while opening up new convenience possibilities for retailers and shoppers.

“I never thought I’d say this in all my years in the business, but it’s actually becoming more profitable to move customers online than to build more stores,” Curt Avallone, chief business officer of the micro pick operator Takeoff Technologies, told WGB in an interview at the ShopTalk conference in Las Vegas this week.

Avallone, an industry veteran of H-E-B and Stop & Shop, was among several exhibitors and presenters at ShopTalk extolling the virtues of a robotic workforce in service of solving current and looming e-commerce dilemmas—although opinions on how to best execute that strategy vary from solution to solution. At ShopTalk, the retail technology show, it appeared a robotics race was already on, even as the field consisted mainly of infants. 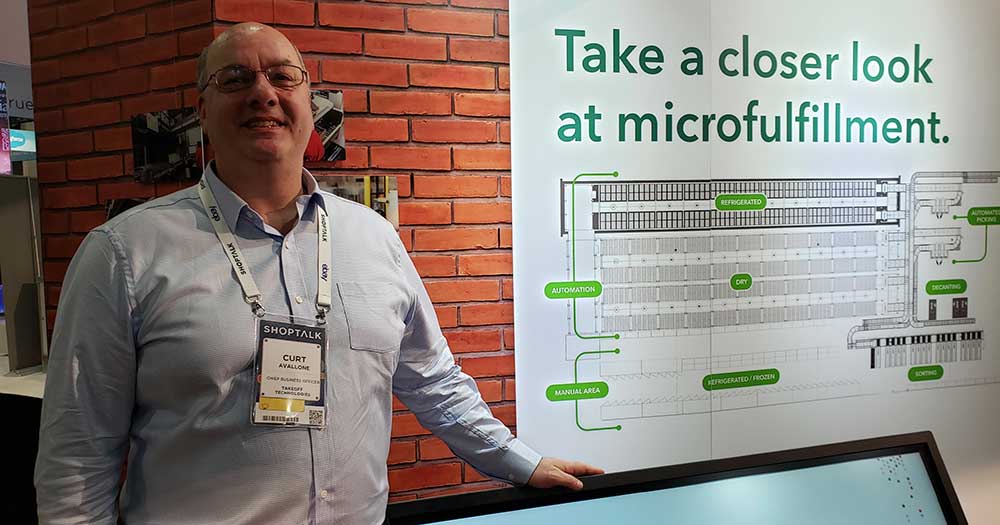 Stores that can combine robotic picking with traditional self-service models will be “far more effective in meeting customer needs and efficient to operate even compared to self-service stores,” said John Lert, founder of Alert Innovation, a company whose proprietary robots are now helping a Salem, N.H.-based Walmart store test automated e-commerce. Alert Innovation is also contemplating a separate rollout of 30,000-square-foot hybrid “Novastores” in which robots assemble center-store orders behind a fresh store floor shoppers can pick themselves.

“We believe this operating model is the only way to combine food e-commerce with physical stores profitably and sustainably, as customers shift a significant portion of their grocery purchases online—as we believe is a given,” Lert said. He asserted that alternatives such as dark stores and far-flung warehouses would eventually cannibalize and deleverage existing stores, while current solutions such as in-store picking won’t be scalable as demand grows.

Avallone described Takeoff as “fulfilling the destiny” of wareroom pick centers he’d developed at Stop & Shop more than a decade ago, utilizing excess space in some stores as warehouses focused on e-commerce. Takeoff, he said, utilizes robots to pick orders in about the same amount of space and among around the same number of items as those warerooms did, but with a third of the employees and a fraction of the cost per item picked.

A relative low cost of entry could also be an advantage for Takeoff, which technically is a software solution utilizing a proven commercial product—robots from Europe’s Knapp Logistics initially used to pick pharmacy orders. By contrast, a competitor on the ShopTalk floor, CommonSense Robotics, contemplates using proprietary robots in an off-site warehouse in the manner of “logistics as a service,” said co-founder and CEO Elram Goren. 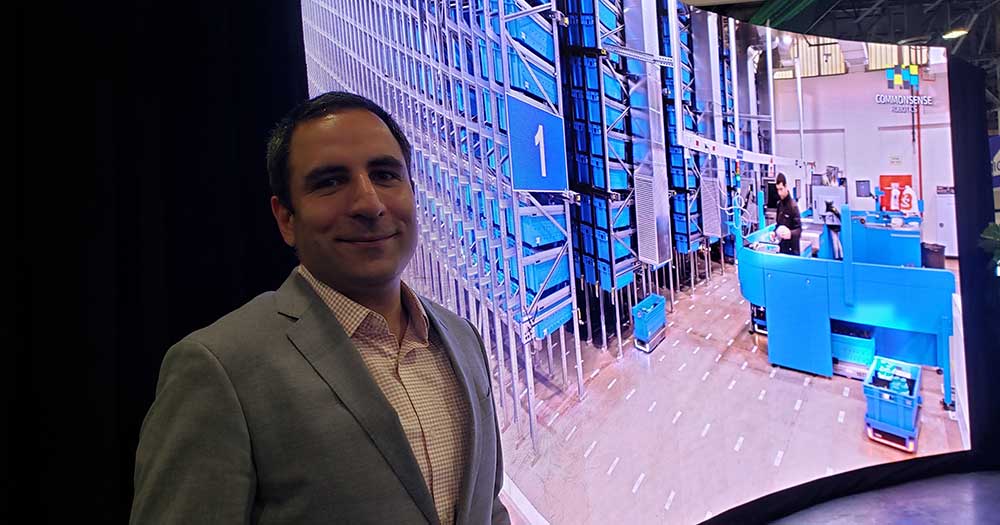 Goren said he was seeking a U.S. regional grocer to partner on CommonSense’s debut U.S. center. The company already runs its technology for a drug chain in Israel.

“The reason we are focused on regionals, is because we feel they have a chance at winning in this space, because of their characteristics and strong brands. That’s not easy, going up against Amazon and Walmart. But it’s a battle we believe they can win because of their distinct advantages.”

Alert Innovations is likewise looking for partners for its Novastore concept, officials said. Its proprietary robots can can travel both vertically and horizontally on a grid, which officials said would reduce the risk of downtime and improve pick efficiency.

According to Avallone, Takeoff centers cost about $4 million to install but can generate annual sales of $30 million to $50 million—or about the volume of a well-shopped store that would take four or five times the investment to build. That, he said, is behind booming demand for Takeoff centers. Although only two currently exit in the U.S., the company has commitments to build up to 88 already and will announce partnerships with at least four more grocers in coming months, Avallone said. Currently, only Sedano’s and Ahold’s Stop & Shop chain are operating those centers. Albertsons Cos. additionally has announced it would build some, including a center now under construction in Tolleson, Ariz.

For Avallone, more efficient picking is only the beginning of the potential benefits of robotics in retail. He suggested retailers could increase order efficiency by supporting what he called “the convenience strategy of the future,” using partners such as convenience stores and restaurants as pickup points and places to combine orders for delivery. At least one retailer in partnership with Takeoff is currently pursuing such a strategy.

“Shoppers are visiting c stores, QSR locations, drugstores almost as frequently as they are with you,” Avallone said. “And when you build strategic alliances across channels and you can share some of your profit and build brick-and-click strategies.” For example, providing a free coffee for shoppers who pick up an order at a coffee shop or having a delivery driver at a restaurant site add a meal to a grocery order en route. This, he said, would further reduce delivery by splitting the cost between retailers and build what he called a superregional convenience strategy that could capture stomach share.

“If I do it right first,” he said, “I won’t just build my online business, but I’ll be able to shut competitor’s stores.”

At CommonSense, Goren raised questions as to the risk for “all-in” investments like Kroger is making with Ocado, arguing that shared services would win in logistics as they have in software and other digital-economy fields. Its costs are supported by low real estate prices—Goren said Commonsense facilities could locate underground if necessary—and labor that is 75% cheaper than manual pick alternatives.

“We’re only at 1% of where this market is going to grow,” Goren said. “So there’s questions as to how these players are going to implement and execute. What might be more important at the end of the day is how the consumer is going to react. And I fundamentally believe we’ll see a very drastic shift in speed and assortment and quality and price they are asking for.”