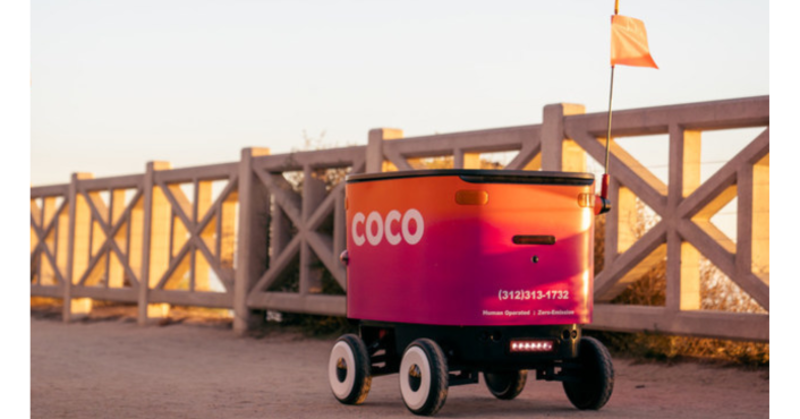 First came the bikes, now the bots: Coco, a robot-powered delivery service that debuted in California in 2020, announced a new, heftier version of its proprietary delivery bot and the upcoming launch of grocery delivery from Los Angeles-based Erewhon Market.

COCO 1, as the new model is called, features a longer battery life that allows for a delivery radius of up to 3 miles, nearly twice that of the original model, according to L.A.-based Coco. Its bigger size also allows it to hold up to four full grocery bags, the company stated.

Both of those features—and a host of cameras and sensors that let remote pilots plan efficient delivery routes and navigate busy urban walkways—make COCO 1 "the perfect vessel for metropolitan grocery delivery," according to the company. The robot was designed and built in partnership with Segway.

"Amidst the ongoing labor shortage and growing demand for delivery robots, we believe that Coco is embarking on an exciting journey in a blue-ocean market," Segway VP of Global Business Development Tony Ho said in the news release, adding that the collaboration with Coco is "by far Segway's largest endeavor in the delivery robotics space."

COCO 1 will be stationed at all seven of Erewhon's locations in and around Los Angeles, according to Coco, helping the delivery provider expand its footprint beyond the city itself. Already, Coco said, the business has relationships with more than 50 merchants operating in Los Angeles, including Umami Burger and True Food Kitchen; more are expected to be announced soon. Coco, which says its service boasts a 97% on-time delivery rate, recently announced the completion of a Series A funding round that brought in $36 million.