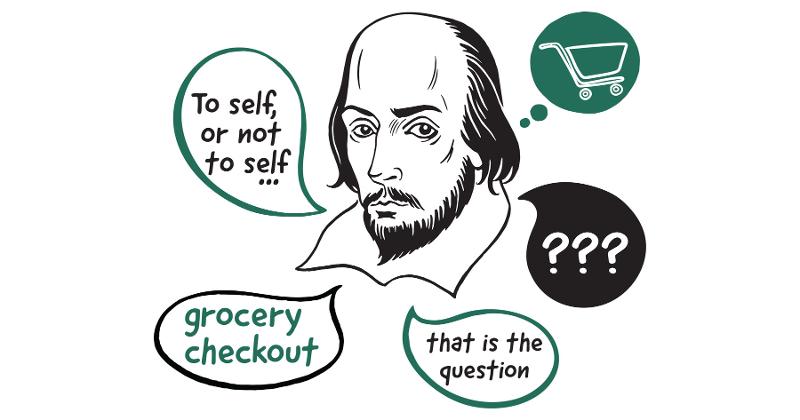 To self-scan or not to self-scan, that is the question—when it comes to grocery checkout.

Cashier versus self-checkout is not an age-old debate that determines our existence, as Hamlet so eloquently pondered. But the question of overall satisfaction at checkout does create a daily debate for retailers.

In today’s grocery space, most grocers offer the choice at the checkout lane. With the older generation of shoppers, there was a time when one checkout lane was all there was to choose from. So, no debate even existed. The younger generation has always had two lane options. So, which is better?

This debate will rage on in households across America. But for the time being, let’s look at where things stand in 2022.

When a 105-year-old grocery chain opened a new store on Friday, it earned bragging rights as a seasoned business—but no one would argue it to be stale. The Demoulas Super Markets, which operates 87 Market Basket stores in four New England states, will open its third and largest Concord, New Hampshire, store. But what will it not have? Self-checkouts.

Wedded to tradition, Market Basket, which is a full-service supermarket with no self-checkout at any of its locations, prides itself on “just people taking care of people.”  In fact, with human relationships at its business core, it wasn't until 2017 that the company went digital.

Earlier this week, the survey and data analysis firm The Feedback Group tweeted  that shoppers at independent grocers using a cashier checkout had “higher satisfaction than those using self-checkout.”

As the wheels continue to come off for ultrafast grocery delivery, the power of human relationships continues to drive people to the cashier lane.

But for those bemoaning the pain of self-check, it is here to stay. According to Deloitte’s 2022 retail industry outlook, leaders are buying into cashierless stores over the next five years. More than half of leaders believe that staff-free stores will be common in the next five years, Deloitte said.

Fast-growingAmazon Fresh, with its signature “just walk out shopping” has opened 40 stores in the last two years in the United States. Across the pond, the grocery retailer is facing strong headwinds. Disappointing sales coupled with current economic challenges have slowed Amazon Fresh openings in the United Kingdom, according to a report in London-based The Sunday Times

Smart checkout solutions are expected to process nearly $400 billion in transactions by 2025, according to Juniper Research.

Self-checkout prides itself with retail efficiency—fast and easy customer convenience.

Seeking to better its lane options for its shoppers, Kroger, one of the largest retailers in the U.S., is testing a new belted self-checkout option in several stores in Ohio which features a belt for customers to set their groceries on while scanning their items.

In the end, the broader issue may come down to giving shoppers multiple options.

Michael Jaszczyk, CEO of GK America, which provides a foundation to support retailers’ customer-engagement strategies, toldWGB that when it comes to the grocery space—choice is important. “A fully integrated solution will allow retailers to mix all these different formats, giving shoppers the freedom of choice in how they checkout,” Jaszczyk said.

Some consumers, perhaps those who are loyal to Market Basket, do not care to engage with their supermarket in a high-tech way.

"Grocery retail is now truly omnichannel, as digital’s share of total grocery sales more than doubled during the pandemic, from 5% to 10% of sales," market analyst Dunnhumby reported in its fifth annual Retailer Preference Index (RPI) published earlier this year. "Yet half of the U.S. grocery shopping population does not buy online and has no plans to. Nearly all online shoppers still buy in brick and mortar, where roughly 90% of all customer dollars are currently spent."

So the debate continues—which lane will you choose?