An updated version of the interactive mapping tool Planned Grocery has been released this week, providing users a “one-stop shop” for precise visibility into the ever-changing grocery landscape.

A service of Beitz and Daigh Geographics, Planned Grocery provides a real-time glimpse at stores that are proposed, planned, under construction or recently built. Those sites, gathered through published reports and other source data and updated weekly, can viewed on a map, and overlaid with demographic data from Esri and local consumer insights as provided by Space Jam Data, among other filters. 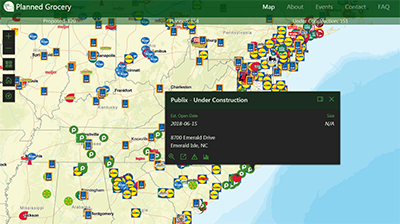 Space Jam, which “crowdsources” consumer sentiment on retail trade areas, is among the new features to the 2.0 version released this week. Other new features include parcel data with aerial photography, and views providing 3-mile radius information and other statistics for a particular site at a glance.

More than 1,500 locations across the U.S. are currently in the database. Each location centers on a grocery store that is either proposed (in predevelopment), planned (a lease has been signed), under construction or built within the last six months.

David Beitz, a partner in the Columbia, S.C.-based company, told WGB the service can be an efficient advantage to grocers seeking competitive intelligence or plotting their own offense. In a tight real estate market beset by so-called overstoring, the site can also reveal “white space,” he said.

“Food retailers can learn who is doing new stores and where these locations are. This will help them to plan for competitive events near their existing stores,” Beitz said. “They may want to remodel or increase marketing if a competitive store is going to open nearby.  Food retailers can also use our platform for site selection in that they can find gaps in the market to place new stores. With aerials, parcel data and traffic counts, our platform makes it easy to prequalify new sites for development.” 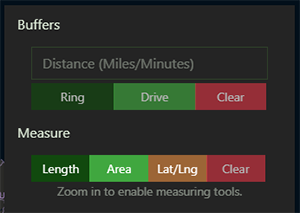 Users of the technology can customize views to focus on individual or groups of competitors and also filter by “dead deals,” or reported sites no longer in development.

Previously, Beitz said, retail real estate professionals would gather this information using a variety of sources, which could often be tedious.

Planned Grocery is a web-based subscription service that is also available as an IOS app. Grocery retailers utilizing the service include Whole Foods Markets, Lowes Foods and Wegmans.

“I think retail real estate folks will find that they can get more deals done with the extra time,” Beitz said. “Each deal out there requires so much data and research. By having more information at your fingertips, you can get quicker to a yes or no on any particulate project.”