Robomart, a tech-enabled store on wheels that consumers can summon in the style of an Uber and pay in the style of Amazon Go, has launched an invite-only beta test in West Hollywood, Calif.

The futuristic concept comes at a moment when the coronavirus pandemic has made consumers wary of crowded stores and hastened the invention’s public rollout, founder Ali Ahmed, co-founder and CEO, told WGB in in an interview. The company maintains a vision to commercialize a driverless version of the Robomart vehicle but the units servicing the West Hollywood beta—which appear to be customized Mercedes-Benz delivery vans—will use drivers. As local regulations allow, Robomart intends to add autonomous vehicles to its fleet, Ahmed said.

The pandemic is also influencing the products aboard the vehicle, which at launch was 50 drug-store essentials, including medicines, first-aid, toiletries, personal care, kitchen products and household goods. Ahmed said a separate Grocery Robomart, including refrigerated fresh foods, would be added to the fleet soon.

Consumers invited to Robomart’s beta can download an app with which they can summon the vehicle. When it arrives, consumers use the same app to open the door and display its inventory; shop by taking items from it; and “check out” when their shopping is complete by closing the van door. Proprietary RFID and computer vision technologies tally consumer orders as they go and deliver a virtual receipt within moments. 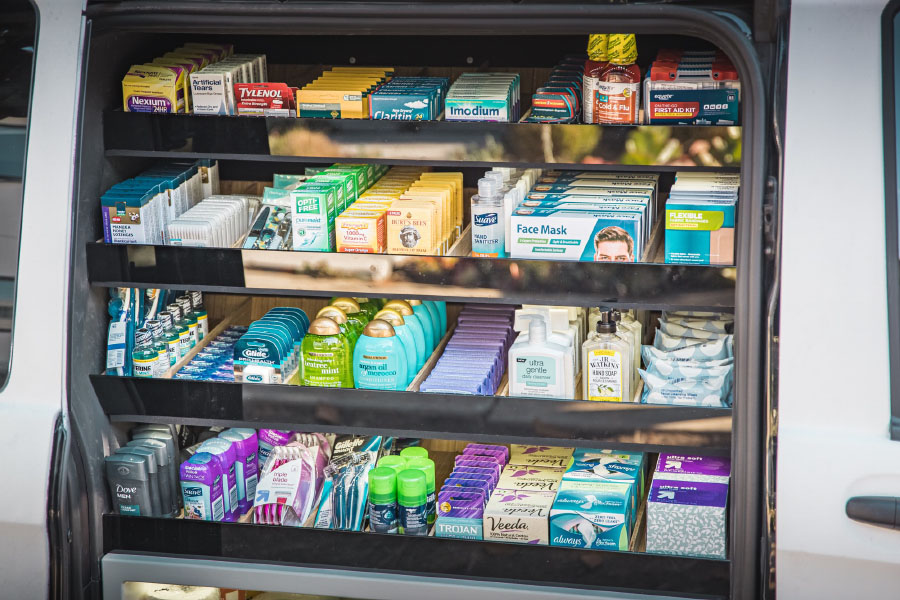 The company said Robomart can meet most consumers in the test area within 10 minutes, accelerating even the fastest order-ahead offerings of express-style e-commerce. Consumers are charged a small fee for summoning the vehicle but no tips are required. Item pricing is “competitive” and inventory is provided by a merchant Ahmed declined to identify, saying that the company anticipated making a separate announcement of its involvement.

Ahold Delhaize’s Stop & Shop banner in 2019 had announced plans to offer Robomart in some areas of Boston but difficulties getting local approvals to operate driverless vehicles there have since scuttled those plans, Ahmed said.

Robomart said it was partnering with Zeeba Vans, a California-based fleet leasing company, to provide an in-kind investment of 100 vehicles over the next two years to facilitate a rapid rollout. Avery Dennison is providing RFID tags to enable the checkout-free experience while Zebra Technologies is providing RFID hardware and antennas.