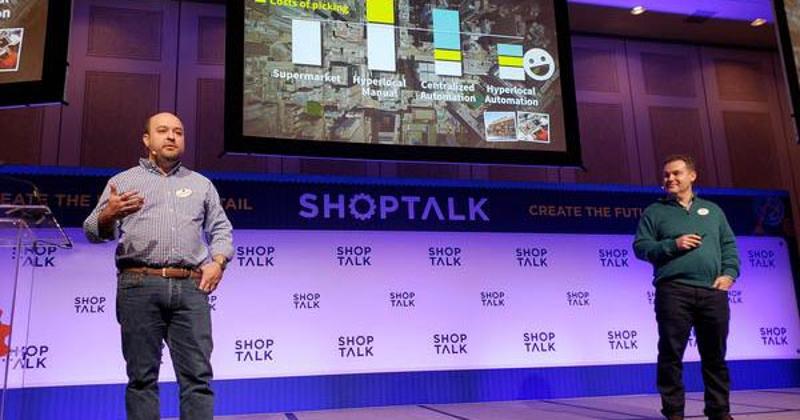 Takeoff Technologies said it has placed a $150 million order with Knapp it said would allow for a 50-site deployment of its robotic micro-pick centers.

Waltham, Mass.-based Takeoff utilizes Knapp’s robotics solution to turn portions of existing grocery stores into pick centers that can assemble online orders for pickup or delivery—a solution officials said provides service at a fraction of the cost of traditional methods. The 50-site expansion would represent the first such solution rolled out at scale in the U.S., indicating a willingness among retailers to dive into robotics.

A spokeswoman for Takeoff declined to identify the grocers that would receive the new centers. She said the locations would all be in North America and would grow the company to 55 sites, including two that are currently operating at a Sedano’s store in Miami and a Stop & Shop location in Windsor, Conn. In addition, Takeoff is building sites at two Albertsons stores and plans to announce a fifth location shortly.

Curt Allevone, chief business officer of Takeoff, told WGB last month that the company had 88 sites in its pipeline, reflecting commitments from at least four grocers. He said a relatively low cost to grocers to add the centers—about $4 million per site—was behind the demand. Each site can do up $50 million in year in sales, he added.

Takeoff said the new equipment would reflect a “second-generation design” that would improve throughput and reduce friction in the construction process. One key element of this design, the companies said, is a new open-shuttle technology that will optimize the space needed for order sorting, while adding flexibility to the overall design and operation of the centers.

In addition to these upgrades, Takeoff said it was assembling dedicated implementation teams to allow for a fast-track implementation strategy, and to give them the capability to deploy multiple sites per week.

“It is extremely exciting to take our partnership between Takeoff and Knapp to the next level, and deliver on our promise of reliability, affordability and scalability,” Jose Vicente Aguerrevere, co-founder and CEO of Takeoff, said in a statement. Takeoff’s existing partners and future clients will certainly benefit from the accelerated deployment capabilities, as they unlock the ability to fulfill at least $1 billion in annual e-commerce sales.

“By the end of 2020, Takeoff will have accumulated at least $2 billion in gross merchandise volume for our retail partners,” said Max Pedro, co-founder and president of Takeoff. “Takeoff and Knapp’s solution will cement us as world leaders in hyperlocal automated fulfillment.”