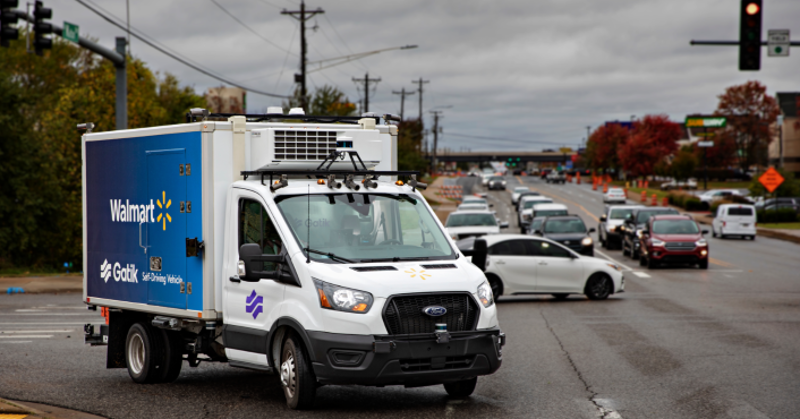 Walmart has ditched the safety driver on the autonomous trucks it has been testing for middle-mile deliveries in Bentonville, Ark.

The retailer, in partnership with Gatik, the Mountain View, Calif.-based maker of the self-driving box trucks, announced Monday that the Walmart-emblazoned autonomous vehicles have been operating fully driverless in Walmart's Bentonville hometown since August.

Walmart and Gatik first began collaborating in 2019, and late last year, Walmart said that 70,000 miles' worth of trial runs of the trucks operating in autonomous mode but with a safety driver present gave it the confidence to plan for fully driverless runs to begin in 2021. Monday's announcement was confirmation that Walmart and Gatik have indeed moved on to that next step.

The trucks run along a fixed route between a Walmart fulfillment center and a Walmart Neighborhood Market in Bentonville, traveling back and forth several times a day, seven days a week, according to a Gatik news release. Gatik, founded in 2017, says that since launching its commercial operations in 2019, it has "achieved a 100% safety record ​​across multiple operational sites in North America," including Texas, Louisiana and Ontario (where it's working with Canadian grocer Loblaws) in addition to Arkansas. Gatik adds that because it's focused exclusively on B2B short-haul travel along set routes, it's able to move more quickly with partner retailers to be ready to phase out safety drivers.

Focused as it is on speed, though, the country's biggest retailer hardly rushed in shifting to no-driver mode: The Arkansas State Highway Commission issued to Walmart and Gatik its first-ever approval for fully driverless truck operations back in December 2020; only in August, according to the news release, did fully driverless operations begin.

Gatik's operations, according to the company, "unlock the full advantages of autonomous delivery for Walmart’s customers: increased speed and responsiveness when fulfilling e-commerce orders, increased asset utilization and enhanced safety for all road users."

Said Walmart U.S. SVP Tom Ward: "We’re thrilled to be working with Gatik to achieve this industry-first, driverless milestone in our home state of Arkansas and look forward to continuing to use this technology to serve Walmart customers with speed."

In September, Walmart said a separate autonomous-vehicle collaboration with Argo AI and Ford Motor Co. would see self-driving vehicles start making home deliveries in Austin, Texas; Miami; and Washington, D.C. Walmart indicated that that last-mile service would launch later this year; the company has yet to announce an update on that initiative.