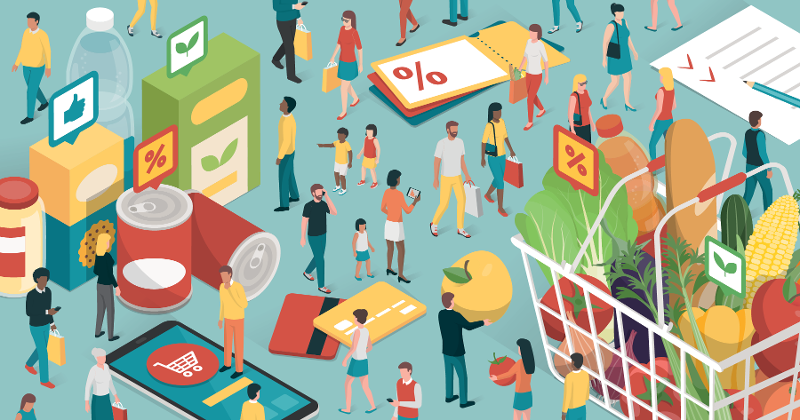 For online grocery shoppers, experiencing a disappointing product substitution is something like catching a cold. Nobody wants one, but sooner or later, they’re bound to get one.

For online grocery retailers, it can be a more serious illness. The wrong substitution can be all it takes to lose a sale, a basket or a customer to a competitor, sources say—issues that have become all the more costly with the explosion of online volumes and all the more prevalent amid current supply-chain and availability issues, all of which arose with the coronavirus pandemic.

Solving these problems is also more complex than it may at first seem, as it often requires coordination between entities that are disconnected at several points: There’s the shopper at home and the picker in a store or warehouse—often not even an employee of the retailer with access to a customer profile but a freelancer answering to a third-party app—left to make a decision or to negotiate a compromise in real time. That’s inefficient at best and not a great experience for the customer.

The inclination to address this problem with machine-learning technology—which most pickers and enablers already do to an extent—can be exponentially more efficient but is also fraught with peril, sources say. That’s because most systems using data to drive recommendations online look at patterns of historical data then spit out items they determine to be most similar. This process, known among technologists as collaborative filtering, can be effective and fast but doesn’t necessarily understand nuances of whatever it recommends, as it bases results on large sets of customers and purchases.

That’s how substitutions can be close but no cigar: A customer who orders a sunflower oil might wind up receiving sunflower seed butter—and quite possibly, head to their phone or laptop, add to the Twitter #substitutionfails hashtag and seek another retailer for their next grocery order.

According to Henry Michaelson, what online food shopping requires is the same attention to data illuminating why the individual consumer buys what they buy and not just what they should get based on what everyone else has ordered. Answering these questions requires a separate processing of data that can better interpret details of the items in the basket themselves—their taste, features, nutrition, ingredients and other attributes—and align them to the shopper. This is known as content-based filtering.

Michaelson, who co-founded the online recommendation engine Halla, says the combination of these varied approaches to artificial intelligence allows the company’s software to serve up more precise and personalized recommendations the shopper will be more receptive to. Doing that can address the user experience, retention, basket sizes and loyalty as they show up not only in acceptable replacements for those items customers want, but cannot get, but in online shopping recommendations, product-discovery applications and their related capabilities.

Other technologies have concurrently pursued and used this kind of content-based food data in pricing or diet recommendations. But effective recommendation engines are still a new thing. Walmart only months ago revealed it had developed a proprietary AI-based recommendation system it was using among its personal shoppers that also alerts customers as the changes take place, succeeding a manual process it acknowledged was inefficient.

“We’ve spent a ton of time—genuinely, an unbelievable amount of time—looking at products in a grocery store and trying to understand what they are.”

Halla officials say their solution will enable retailers to better generate items that will sell, and help retailers further personalize and improve the experience for shoppers.

“We have a ton of data that spans [not only] grocery transactions but also menus and product catalogs and some proprietary ontology that we built in-house,” says Michaelson, calling that “a really key differentiator” for the company. “We’re a food-first approach, not just a statistics engine,” he says.

Adds Halla co-founder Gabriel Nipote: “We’ve spent a ton of time—genuinely, an unbelievable amount of time—looking at products in a grocery store and trying to understand what they are.”

Going to School on Food

Halla’s combination of food content and shopping data began in the imagination of Michaelson, the company’s current chief technology officer; Nipote, its chief financial and operating officer; and a third co-founder, CEO Spencer Price. The three have known one another since they were high school classmates in California.

Initial conversations several years back had them imagining what Nipote described as a would-be Yelp competitor helping consumers tackle the unsolved riddle of finding a restaurant a group of friends could agree on. This mystery “took us down this odyssey of how we can learn to use machine learning to predict what people want to eat,” he says.

It was a separate conversation some time later with executives from an East Coast online grocery retailer—they declined to identify which—that opened their minds to a larger opportunity just below the surface: a massive industry that at the time, was only beginning to absorb significant demand for online shopping and the various difficulties arising from it. Product discovery, product recommendations and product substitutions—things that in-store shoppers have learned to do themselves—were all proving troublesome experiences in the virtual world.

“We want to be the product content plumbing that enables grocers to show great products whenever.”

That prompted the founders to pivot toward developing a business-facing application a little more than three years ago, they say.

“We basically foresee a hybrid future of grocery, where digital applications become more prevalent in stores and in various ways online—scan-and-go apps, smart carts, and also spanning functionalities in the grocer’s mobile app,” Nipote says. “We want to be the product content plumbing that enables grocers to show great products whenever.”

Their software-as-a-service offering can connect to grocers through APIs, or through other technologies they may employ in e-commerce, such as an integration with the scan-and-shop app Future Proof Retail. Halla’s technology can also reside deep within a retailer’s proprietary systems—a test of which is going on now, the founders say.

Are Grocers All the Same?

Halla officials say proof of the technology’s value is in the online pudding. In one case where Halla has been deployed live, basket sizes have improved by close to 6% for each user, and that sparks deeper loyalty and frequency, Nipote says.

Those figures can help drive further e-commerce benefits for retailers, such as digital-ad click-through rates, he adds, and are among many emerging opportunities for retailers to better distinguish themselves by tapping into chances to personalize other aspects of the shop, as with diet-focused product assortments. In his opinion, they should keep their eyes open.

“So, I think that the biggest thing that should both excite and scare grocers is that right now, the extent of personalization in many ways is too similar: You can send out some types of personalized coupons and those types of things. But from an e-commerce perspective, everyone’s kind of building the same website, and that’s a problem because when there’s so much competition for something like this, it starts looking pretty identical, and the competition is going to kill away any profit margin that grocery might have.”