The idea of electronic shelf labels (ESLs) is not a new one, and the application of the concept has become fairly common in Europe. But U.S. grocers have been slow to the uptake for a variety of reasons, including a perceived low return on investment. This, however, may be about to change as ESLs evolve to perform tasks that go beyond a quicker price change.

ESLs are gaining new efficiencies that can cut down labor costs, manage stock, streamline e-commerce and communicate with shoppers in new ways.

Brian Salzman, national accounts manager, West, for ESL provider Aperion Solutions, a subsidiary of Bridgeton, Mo.-based Hussmann Corp., said grocery stores are now looking at anywhere between an 18-month and two-year payback if they choose the correct functionalities. Given these advances, Salzman said ESL companies are “on the cusp of breaking this thing open,” and predicts that this will be the year in which “ESLs grab hold with retailers because there’s many more things to build into the profitability and there’s much more value than ESLs have delivered in the past.” 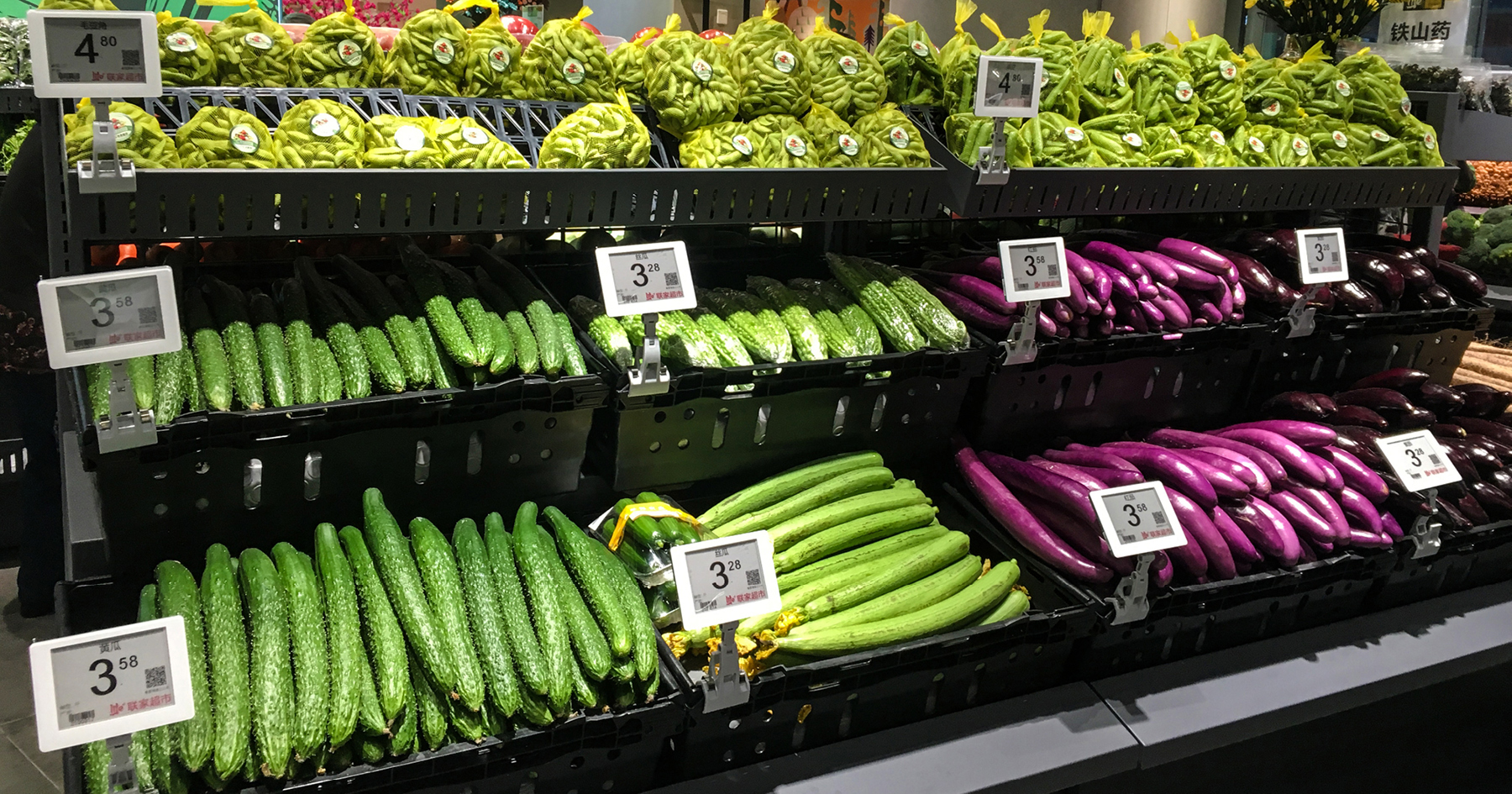 How Kroger Is Edging In

The Kroger Co. has obviously taken a keen interest in ESL-related opportunities given its recent partnership with Microsoft to create proprietary technology called EDGE (Enhanced Display for Grocery Environment) Shelf. It’s connected byinternet of things sensors that beam real-time information from every aisle and endcap in the store. The system is powered by Microsoft Azure to manage store and process data near the smart shelves and on the retailer’s smartphone app. In addition to price changes, the digital displays will be used to communicate promotions through dynamic advertising as well as dietary information. The system will also connect with Kroger’s Scan, Bag, Go program.

Kroger debuted the technology in a few stores near its hometown of Cincinnati and plans to roll it out to about 120 stores this year, according to Microsoft Azure officials.

Despite ESLs’ new range of capabilities, easy price changes are still a major advantage not to be scoffed at. Salzman said he has talked with grocers who are spending upwards of $10 million a year changing prices. To put it in perspective, staff tasked with changing price tags are often on the more senior level, making them some of the most expensive labor in the store. For retailers changing 5,000 to 12,000 tags a week, the labor cost really adds up.

Also, as more major retailers implement price optimization via artificial intelligence programs such as Revionics and Dunnhumby, many are “leaving sales on the table,” according to Salzman, because they don’t have enough time to manually implement as many price changes as the computer system is telling them to do.

ESLs also provide a cutting-edge advantage to independents that are often competing with the larger names on a week-to-week basis. Streamlining price changes give these grocers a chance to quickly match a price with nearby competitors and “level the playing field with major chains,” said Salzman, who points out that one in 10 such operators he speaks to are interested in leveraging ESL technology.

ESLs can also speed up front-end efficiency because they reduce the need to stop for price checks and overrides in situations such as a customer saying to the cashier, “Well, it rang up $2.99, but I thought it was $2.50.”

Displaydata’s research with consumer insight provider Planet Retail has emphasized the need for showcasing correct pricing, which Paul Milner, marketing director for U.K.-based ESL provider Displaydata, warns can “make or break an in-store sale” for 80% of respondents. The data shows that only 43% of shoppers say they trust that the prices on a display shelf will be the same as at checkout, and another 53% believe that in-store prices are occasionally inaccurate.

“Given the skepticism surrounding in-store prices, retailers increasingly need a seamless and consistent pricing strategy across all channels to build consumer loyalty and trust,” Milner said.

In addition to labor costs and price competition, inventory management is a newer perk associated with ESLs. Out-of-stocks are a battle that retailers have been facing since the advent of grocery stores, with very few simple solutions in sight.

In the age of e-commerce, out-of-stocks are particularly detrimental because it costs customer satisfaction if even one item out of 30 in an online order is not available. However, some ESL systems are outfitted with shelf watch technology that employs cameras and newfangled application programming interface platforms.

These API platforms allow a retailer to choose an interval basis for alerts to low stock positions; these alerts can be communicated to anyone from store associates to direct store delivery personnel, Salzman said.

Grocery stores have gotten more crowded as e-commerce personal shoppers hunt for produce or sort through cheese selections beside the regular brick-and-mortar customers. This relatively new system can make things complicated, especially when there are often more than one or two personal shoppers working a store at the same time.

Salzman said the flashing-light capability available on the Aperion model can help with e-commerce organization. A personal shopper can be given a digital map of sorts that informs them of which aisle to visit next; when they get to that aisle, the price tag of the needed item flashes. These flashing lights can also be color-coded for each individual personal shopper. For example, one person could be picking blue, one red and another green.

“You could have nine pickers in the store at once picking products, utilizing the different colors of LEDs,” Salzman said. Tests in Europe have seen about a 30% efficiency gain in picking and the time it takes for an order to be completed, he said.

Milner agrees that creating a digitally connected environment gives retailers the opportunity to meet evolving consumer expectations, and as e-commerce sales continue to grow, “Moving the store from an analog to digital environment will help retailers better blend their virtual and physical experiences and find new ways to ensure the store remains a fresh, engaging and rewarding place to visit,” he said.

While the image of dynamic screens spread throughout the store may sound like an energy drain, Brett Bonner, VP of research and development for Redmond, Wash.-based Microsoft, said in a statement that Kroger’s new Shelf EDGE solution is more environmentally friendly than one would expect. For example, it uses a low-voltage, direct current that meets standards set by the Emerge Alliance, and plans are in the works to convert the system to run on renewable energy sources.

Also, Bonner says Shelf EDGE uses LED lights that require less power than iridescent or fluorescent bulbs. “[The] main reason for having big lights in stores is because you’ve got to light it up to read paper tags,” he said, and this will allow stores to turn down the lights.

In addition to reducing energy consumption, the flexible pricing enabled by ESLs enables retailers to strategically price perishable items throughout the day, encouraging customers to buy them before they spoil, said Milner. This freedom allows retailers to graduate pricing based on sales velocity and inventory levels. According to insight from Planet Retail, 65% of consumers would welcome such price changes throughout the day if a product is approaching its sell-by date.