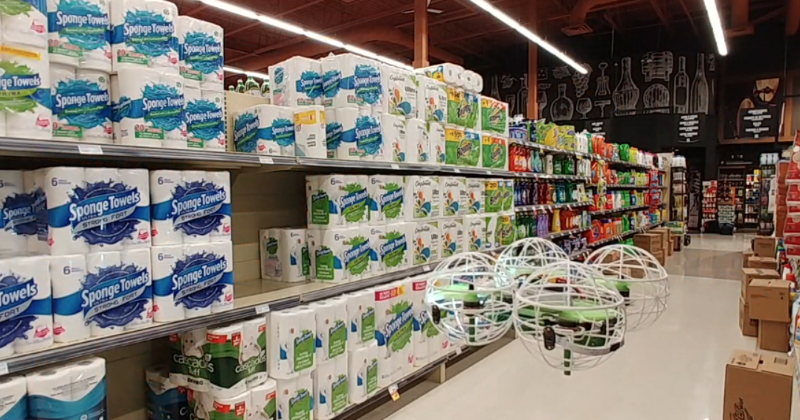 Grocers have a reputation for being a little slow to the punch when it comes to adopting new technology, but a drone-fueled supermarket is becoming a very real possibility.

The main buzz about drones has been delivery-focused, with Google's Wing Aviation from Alphabet just receiving Air Carrier Certification from the Federal Aviation Administration, which means it can start officially delivering goods from businesses to people’s homes via drone (but only in Virginia as of right now and with certain restrictions), beating Amazon to the punch.

However, Amazon is also slowly testing its Prime Air concept in England, which promises to use autonomous drones that can carry up to 5 pounds to deliver packages to customers in 30 minutes or less.

So of course, my next thought is to wonder if groceries will ever be delivered via drone. Darin Archer, CMO of commerce software company Elastic Path, assured me in an email that “drones can be used by both retailers and CPG companies in grocery and other industries in the short term to improve convenience, and will continue to proliferate in the longer term.”

Archer pointed to the success of curbside pickup, which he said some analysts are predicting will reach $35 billion by 2020 and that 25% of consumers will use the service.

“As we all get busier, a drone option would be even more convenient,” he said. “I can see even more people opting for this delivery mechanism as long as it was done properly and didn't cause security issues (What if I'm not home?), or public safety issues (What if it crashes?).”

Archer believes that drones will gain momentum in retail due to their ability to help “develop direct relationships with consumers.” He imagines a world in which he is close to running out of his child’s favorite juice and would have the ability to ask Alexa to order more, prompting a drone to drop off a bottle of his preselected brand into a specially designed drop bag outside of his front door that locks after the package is delivered.

“Companies who get in on this trend early and enable simple commerce transactions from any location will be the ones who win this battle for the consumer's mind and wallet, whatever the delivery mechanism is,” he said.

This reality of a future in which drones perform grocery tasks became abundantly clear to me when I read about Pensa Systems’ shelf-scanning drones. At first glance, the drones look like a bunch of flying Wiffle balls. I wasn’t sold, imagining them whizzing around the grocery store and crashing into shoppers’ heads. However, after reading into the subject, I learned that the company said tests showed that shoppers barely pay attention to the drones, minus some curious glances. The drones are quiet, and they are programmed to work only in empty areas of the store and move elsewhere if customers come near.

Pensa employee Richard Schwartz also pointed out in a blog post that the drones have a “big advantage” over heavy equipment and ground robots—think the inventory scanning robots such as Schnucks’ Tally or those recently deployed by Walmart—due to their agility and small size, which he says also translates to a potential for lower liability and injury concern. To start, Pensa’s deployments will usually take place after hours and only at select times during the day.

As the e-commerce race continues, with many grocers keeping a watchful eye on autonomous vehicle delivery systems such as Kroger's, those who wish to get ahead may be wise to look to the skies.