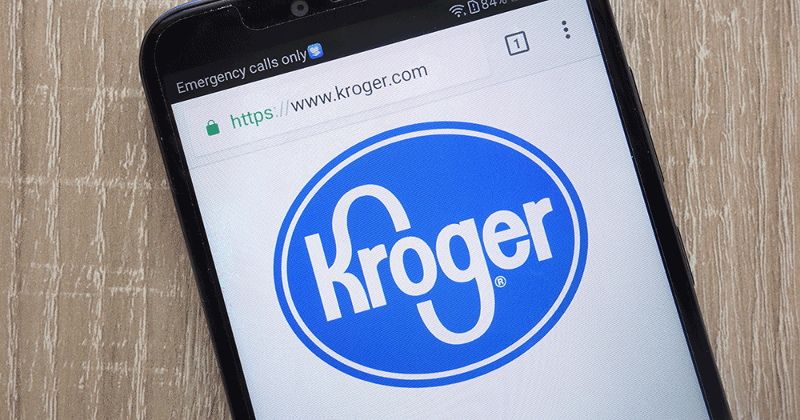 The Kroger Co. is experimenting with new digital marketing tactics as it turns to alternative revenue streams to help fuel its Restock efforts.

In a call with analysts earlier this week, Gary Millerchip, CEO of personal finance for Kroger, said the retailer’s alternative profit stream had seen a “very strong year” with 20% growth  in 2018 and there are expectations for continued growth this year. Millerchip is set to succeed CFO Mike Schlotman following his April retirement.

However, Millerchip emphasized the importance of a “symbiotic” relationship between Kroger’s alternative revenue and its core business as “the data that we're generating to drive those alternative business are coming from that core business,” adding that it is also important that Kroger does not damage its relationship with customers through its use of shopper data.

In its latest move, the Cincinnati-based retailer is working on a new idea it has to “close the loop” in digital marketing,

Schlotman explained that the retailer’s data could pinpoint when an ad view had turned into a sale. He gave an example of a customer seeing a soda ad when visiting a site like ESPN.com and Kroger having the ability to see if the individual had purchased that item in-store, allowing advertising platforms to determine if it would be necessary to continue showing the customer the same ad.

He also pointed to an example of searching for Nike shoes online, and afterward ads for those shoes popping up everywhere because Nike does not know if the customer has actually purchased them or if the sale was in store.

“We can tell [brands] whether or not they bought it in a brick-and-mortar store, and other folks can't close that loop for them,” he said.

Millerchip added that if a CPG company would like to see how an advert performed, Kroger will be able to use its ecosystem to “help close that loop and really help be the most transparent and most effective marketing channel for those dollars, to really understand whether or not that led to an actual purchase transaction or not.”

In the days following these comments, Kroger revealed a new strategic partnership with Pinterest that will take advantage of Kroger’s first-party data to track the path between online discovery and purchase.

Cara Pratt, VP of customer communications, product strategy and innovation for Kroger’s 84.51 degrees, said the efforts aim to “enable brands to create engaging moments with consumers in an effective and efficient manner” and has the potential to drive “meaningful value for advertisers.”

Kroger officials said the partnership will allow brands to target 1 in 3 shoppers through buying capabilities with Kroger Precision Marketing, with the retailer catching 96% of all transactions made through its loyalty card program. This advantage, officials explained, would help brands reach target audiences and measure sales impact.

“It's certainly a big opportunity and is where we have a lot of focus right now, both in using digital marketing on our own properties, and how can we get the right product offered to the right customer on Kroger.com or through the Kroger mobile app, but also using ad data to be able to help on properties that aren't Kroger,” Millerchip said.

Additionally, Millerchip indicated in the analyst call that Kroger is expecting several initiatives it plans to launch this year to accelerate in 2020, naming media efforts in particular.

This is evident in Kroger’s recent moves to embark on a search for its first-ever creative agency of record as other large companies pull ad efforts in-house, according to AdWeek.

Mandy Rassi, Kroger’s head of brand building, told AdWeek that the retailer was considering both larger firms and independents in an effort to cast a wider net.