The 39th annual Natural Products Expo West in Anaheim, Calif., was jam-packed with the newest on-trend products, from CBD oils to plant-based dairy alternatives and grain-free foods, that today’s consumers are looking for where they shop.

The U.S. natural and organic industry continues to grow, hitting $219 billion in sales last year, said Carlotta Mast, SVP and market leader for Boulder, Colo.-based New Hope Network, during the State and Future of Natural/Organic session, held just prior to the opening of the show floor.

However, organic dairy is one category that continues to face challenges, said Mast, who cited oversupply and the growth in plant-based alternatives to dairy as causes of the category’s plateauing sales.

On the show floor, plant-based dairy alternatives were a top trend. And though innovation spanned a multitude of categories, our editors identified seven top trends at the expo.

New plant-based milk and creamer substitutes were featured by numerous exhibitors, including Elmhurst of Elma, N.Y., which launched a hemp-based creamer. Made with real hemp seeds and real hemp cream, the creamer contains just four ingredients and 350 milligrams of omega-3s. 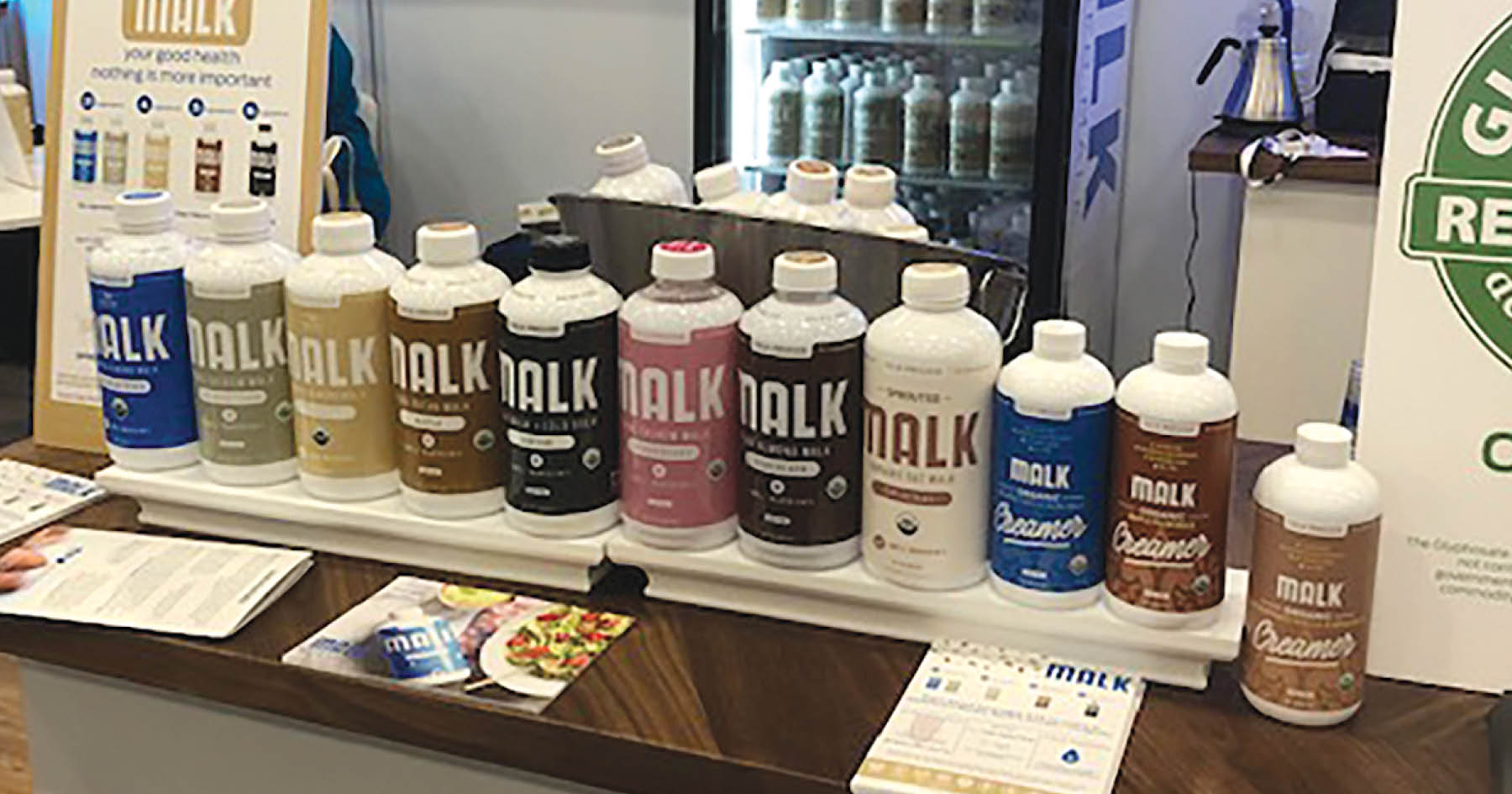 Houston-based Malk Organics nut milks are lactose-, dairy-, and gluten-free, and they contain no binders or fillers. Malk also launched a Sprouted Oat Milk and a line of oat-based creamers at the expo.

Hemp and cannabidiol (CBD) is a fast-growing category. New Hope points to the passage of the 2018 Farm Bill and CBD curiosity as category drivers.

From lemonade to tinctures to edible oils and more, CBD/hemp products were all the rage at this year’s Expo West. RE Botanicals of Boulder, Colo., took home New Hope’s Nexty Award for Best New Hemp/CBD Product for its CBD Tinctures.

CBDistillery of Denver showcased its CBD Oil, Capsules, Cream and Isolate. Its products are made with natural CBD oils derived from non-GMO and pesticide-free industrial hemp.

A recent New Hope survey of more than 2,700 U.S. consumers found that 47% have some familiarity with CBD. Of those familiar, 57% have considered purchasing a CBD product and 30% have purchased a product containing CBD.

While a New Hope survey of 230 natural brands in January 2019 revealed that most (71%) do not sell a hemp/CBD product, 65% indicated that they plan to launch one in the next one to two years.

“Gluten-free has been around a long time; the real story is grain-free,” said Brian Togubat, co-founder of Eat My Waffles. The Encinitas, Calif.-based company launched its next-level grain-free, gluten-free, no-sugar-added waffle and pancake mix at the expo.

Citing SPINS data that “grain-free” and “paleo” are two of the fastest-growing food claims today, Denver-based Cappello’s featured its grain- and gluten-free pizza made from almond flour. The fresh frozen pizza is available in a number of varieties, such as Italian sausage, pepperoni and cheese.

Pamela’s Products of Ukiah, Calif., introduced Tiger Nut Flour, Cassava Flour and Almond Flour. These paleo-friendly, grain- and gluten-free flours can be used to make a variety of baked goods.

Maria and Ricardo’s of Canton, Mass., served up tasty tortillas made from vegetables at its busy booth. Its Grain Free Veggie Tortillas are available in three varieties: Zucchini, Cauliflower and Sweet Potato. All varieties are also free from gluten, soy, dairy and eggs.

Humanely raised and healthfully fed meat and dairy products was another hot trend at Expo West. Organic Valley of La Farge, Wis., gave attendees a firsthand look at its farms and farmers, who supply its milk from 100% grass-fed cows. A live broadcast at the Organic Valley booth gave attendees the opportunity to ask Organic Valley farmers questions that were answered from the farm.

A video at the Handsome Brook Farm booth allowed visitors to watch its hens roaming freely on ample pastureland. American Humane certifies the Franklin, N.Y.-based Handsome Brook Farm hens, which get at least 108 square feet per bird on rotated pastures.

San Francisco-based Olly featured its Protein Bar line, which has 15 grams of plant-based protein in each bar. The bars are available in Salted Caramel Chocolate, Peanut Butter, Zesty Lemon Creme and more.

RW Garcia of Scotts Valley, Calif., launched a line of non-GMO and gluten-free Organic Corn Chips in Yellow, Blue, Bar-B-Q and Chili Cheese. Late July of Boston introduced a new line of popcorn in a variety of flavors, including White Cheddar, Sea Salt and Kettle Popcorn.

Taking granola beyond breakfast and making it an all-day snack, Creative Snacks Co. of High Point, N.C., featured its Granola Clusters in a variety of flavors. And Golden Beet-o de Gallo from Love Beets of Bala Cynwyd, Pa., won the expo’s Nexty Award for Best New Savory or Salty Snack. 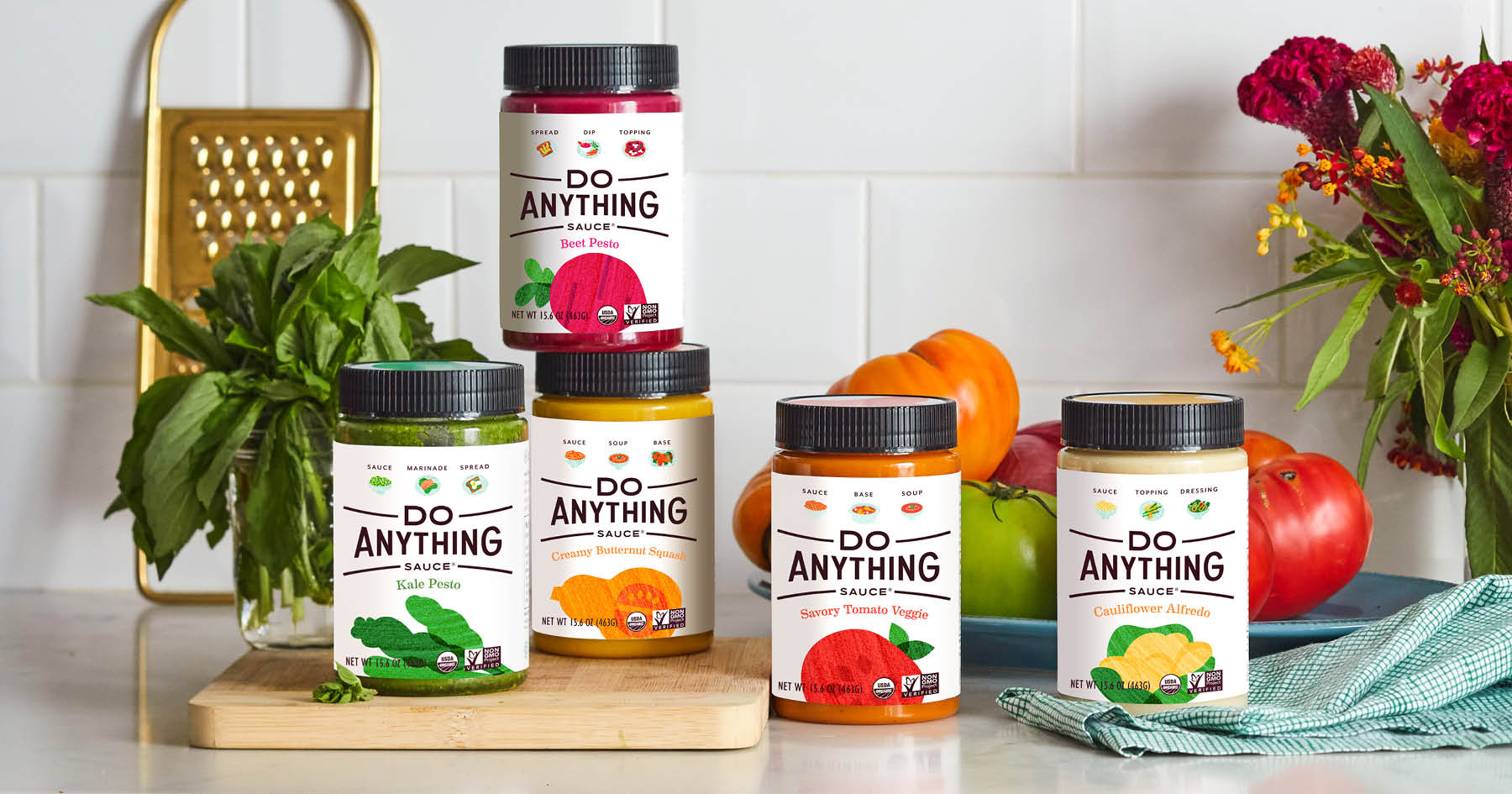 Photograph courtesy of Do Anything Foods

Functional food and beverage sales continue to surge, with the category growing 7.5% to $68 billion in 2018, according to New Hope, which names mushrooms, hemp and CBD, ashwagandha and probiotics as hot functional ingredients.

Wisdom Natural Brands of Gilbert, Ariz., has relaunched its teas featuring a base of yerba mate, hibiscus and stevia. Yerba mate contains antioxidant compounds, while hibiscus has many reported health benefits.

The surge in plant-based foods has created a veritable feast of options for breakfast, lunch, dinner and snacks in between.

Alpha Foods of Glendale, Calif., featured its plant-based Chik’n Nuggets and All Day Burritos loaded with plant-based protein. Detroit-based Banza showcased its Penne made from chickpeas, which contains 25 grams of protein per serving.

Sales of natural supplements, natural living and household products, and natural and organic pet products were all up last year. Citing a stat from the American Pet Products Association, Mast of New Hope pointed out that 73% of millennials own a pet.

These consumers tend to be more concerned about products that are healthy for their pets and the planet. As a result, natural/organic pet products far outpaced conventional last year, up 10.2% to $7 billion, compared to only 1.9% growth for conventional pet products.