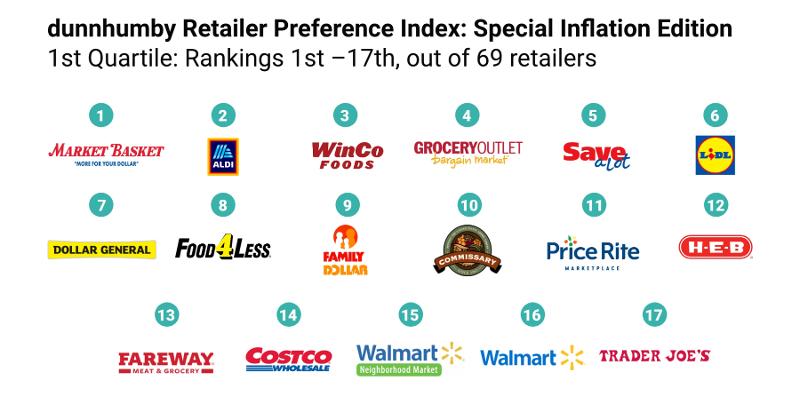 “Market Basket has shown itself to be the best performing retailer in these times of economic uncertainty, by being the best in the country at saving customers money while simultaneously building stronger emotional connections with their shoppers and thereby increasing their shopper visits faster than most other retailers,” said Grant Steadman, president of North America for dunnhumby. “Retailers who are focusing their customer value proposition on saving customers money are best positioned to meet the challenges of this prolonged period of inflation and economic uncertainty.”

The Tewksbury, Massachusetts-based grocer eclipsed Winco, which earns the third spot while Amazon took a tumble as it fell out of the top 10 due to consumers increasingly trading e-commerce conveniences for cost savings.

This most recent data is courtesy of The dunnhumby RPI: Special Inflation Edition released as part of The dunnhumby Quarterly: a strategic market analysis of key retail themes, with the latest edition focused on consumers’ reaction to rising grocery prices.

Experiencing a resurgence, and rounding out the top five are Grocery Outlet and Save A Lot, which have both provided customers savings during these inflationary times, the report found.

“Amazon dropped out of the first quartile as their web traffic declined -6.5% so far this year,” dunnhumby reported.

Club channel retailers, such as Costco, Sam’s Club and BJs Wholesale, are also underperforming the market in year-over-year visit growth in 2022, dunnhumby reported. The club channel grew at -1.9% in the first half of 2022 compared to the first half of 2021, slower than any other channel, according to foot-traffic analytics firm Placer.ai.

This is notable because the club channel tends to be the channel that is best positioned for success over the long term, dunnhumby reported, adding that lower income shoppers are more likely to shift toward smaller pack sizes during inflationary times.

With food-at-home prices rising 13.5% over the last 12 months—the highest rate since March 1979—grocery spend is the biggest part of the household budget that consumers can take immediate action on to save money.

Nearly 70% of consumers are feeling intense budget pressures and that number is on the rise,dunnhumby reported.

“Retailers who excel at saving customers money have customer value propositions that are best-positioned to win during inflation,” dunnhumby reported.

Other key findings from the survey found that inflationary times are a big tailwind for discounters such as Dollar General, Family Dollar, Grocery Outlet, Lidl but create strong headwinds for premium specialty retailers (such as Sprouts, Wegmans, and The Fresh Market) and for regional grocers with a quality-first position, dunnhumby reported.