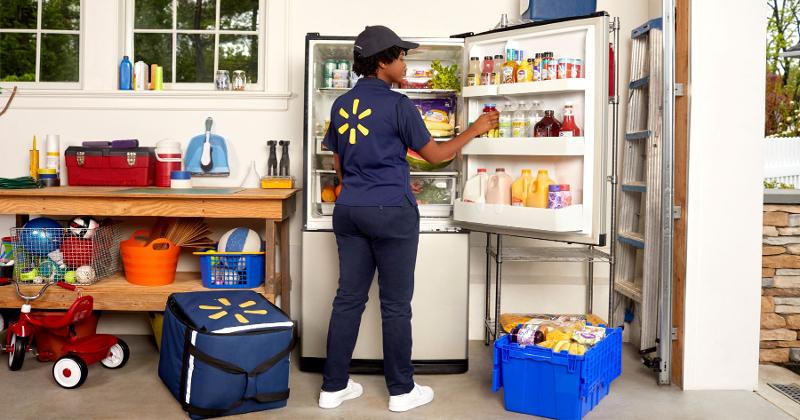 Those are the offerings in play as of Wednesday from Amazon and Walmart, respectively, with annual price points of $139 and $138, respectively.

On the same day that Amazon announced a deal with Grubhub that will give Amazon Prime members a free one-year trial of Grubhub+ (which offers free restaurant delivery on orders of $12 or more), Bentonville, Ark.-based Walmart announced that it's integrating InHome delivery as an optional add-on within its Walmart+ membership program.

Walmart's InHome delivery service is exactly what it sounds like, with a "highly trained InHome associate" delivering orders placed on Walmart.com or through the Walmart app into the customer's residence or garage via a one-time door access code and putting away perishable goods in the refrigerator or freezer as needed. The offering debuted in 2019 and was available to six million U.S. households as of the beginning of this year, when Walmart announced a major expansion of the service that would make InHome delivery available to around 30 million households by the end of 2022.

Previously, InHome and Walmart+ were separate membership programs, with InHome service costing $50 per year and a Walmart+ membership clocking in at $98 annually (or $12.95 per month). Walmart+ benefits include free unlimited grocery delivery from Walmart stores with a $35 minimum order, free shipping with no order minimum, use of checkout-free Scan & Go payment in store and, as of April, 10 cents off per gallon at more than 14,000 gas stations across the country.

On Wednesday, Walmart said that InHome now will be available as an add-on to Walmart+ memberships at a discounted rate of $40 per year (or $7 per month) for the in-residence delivery service—bringing the total cost for an annual Walmart+ membership with InHome service to $138, or $1 less than an Amazon Prime annual membership.

"We know how much InHome members love this service—they see the same familiar faces and build real relationships with our associates, who help them get through their busy weeks," InHome VP and general manager Whitney Pegden said in a statement. "InHome has one of the highest customer experience ratings in the business, and now we've made it even easier to access in even more locations."

Most U.S. households (62%) belong to at least one retail membership program, Chicago-based research firm Numerator reported in May, with Amazon Prime holding by far the largest share of subscribers, although Walmart+, which launched in fall 2020, is seeing its numbers grow. Nearly three in four Walmart+ members (73%) also are Amazon Prime subscribers, according to Numerator.

The Bentonville-based retailer, which has gone toe to toe with Amazon on membership deals before, touted as much in its InHome news release Wednesday. "Walmart’s e-commerce sales grew by 38% over the last two years, and Walmart continues to invest in the delivery space to create a seamless, flexible experience for customers," the company stated. "Additionally, the retailer is ramping up delivery slot capacity by 35% this year to meet growing demand."