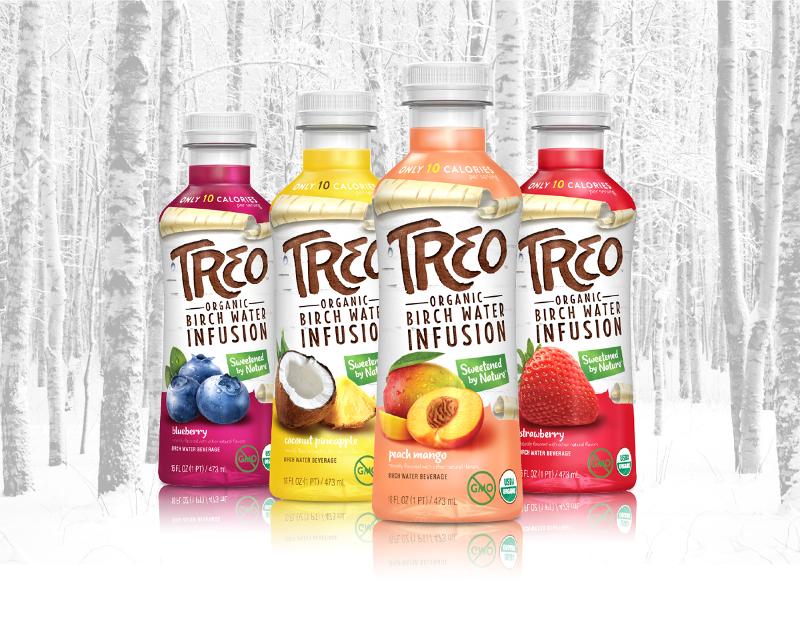 Bob Golden, son of Hyman Golden, one of the three founders of Snapple, discovered the benefits of organic birch water during a trip to the Nordic countries of Europe.

Treo Organic Birch Water Infusion is being launched at the Natural Products Expo East show (BOOTH #6712) in Baltimore on Sept. 22. Treo is a low calorie, organic- certified fruit beverage that is infused with hand-tapped Vermont birch water to enhance its natural sweetness and nutrient benefits. “Treo is not only a super healthy beverage” says Bob Golden, founder and CEO, “it tastes delicious and hydrates you like nothing else”.

Treo is the first beverage to incorporate birch water sourced from U.S. birch trees. “We worked closely with forestry experts affiliated with major universities in the Northeast to identify the best birch sources and ensure the tapping process was done in the most ecologically friendly manner” says Brian O’Byrne, Treo president and former CEO of YooHoo/Orangina.

Treo comes in four flavors – Strawberry, Blueberry, Peach Mango and Coconut Pineapple – each with only 10 calories per serving and packaged in a proprietary 16 oz. PET bottle. Each flavor is ‘sweetened by nature’, non-gmo, OU, gluten free.

The Treo formulas were developed in conjunction with IFF, one of the world’s largest flavor houses. Package designs were created by HMS Design of Norwalk, Conn. Sales efforts are being managed by the Touch Agency of Austin, Texas.

“Our strategy is to roll out the product primarily through the natural channel beginning in the Northeast” said Golden. “We do believe that Treo will also do well in more mainstream outlets and plan to expand our business not only geographically, but to a broad range of retailers in club, mass, drug and c-store during the coming year”.