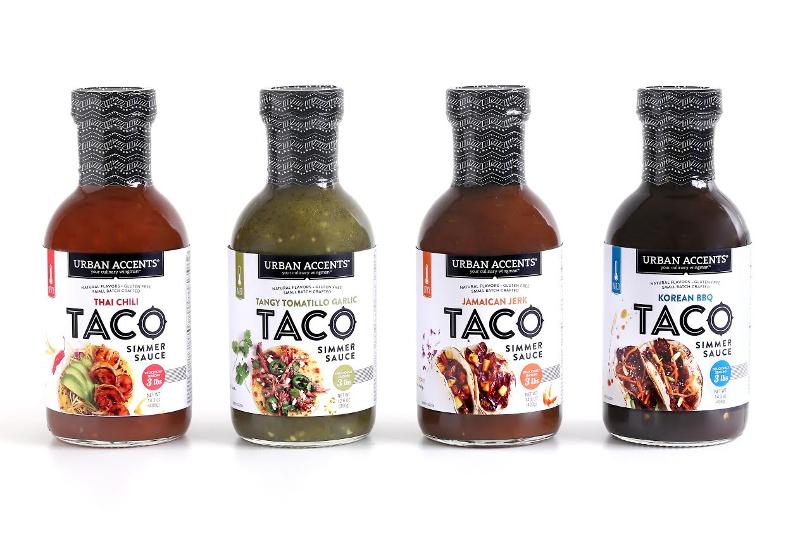 The products will be presented at this year’s Winter Fancy Food Show, January 22-24 in San Francisco. Visitors to the show can sample its new line of naturally flavored, gluten-free Taco Simmer Sauces. The globally-inspired line draws influence from street food trends from around the world. The four different sauces serve as a flavor-saturating base and can create hundreds of different taco varieties, meat-based or vegetarian, company officials say.  From family dinners to late night eats, each bottle of sauce prepares up to three pounds of meat or veggies in just 20 minutes. Preparation directions and creative serving suggestions are included on the labels.

“Urban Accents stepped into the sauce game last year when we introduced our first line of simmer and pizza sauces at the Summer Fancy Food Show. These have been an overwhelming success for us,” says Tom Knibbs, president and co-founder and of Urban Accents. “We are poised to answer the consumer shift towards newer brands and specialty flavors by bringing these trends to life for our retailers. Last year Americans ate over 4.5 billion tacos—we expect that number to continue rising.“

The Taco Simmer Sauce line’s flavor profiles include: Korean BBQ – A savory and sweet sauce; Tangy Tomatillo & Garlic – The most traditional of the sauces, a garlicky tomatillo base with subtle notes of jalapeño heat and citrus; Thai Chili – A balanced blend of sriracha, garlic and lime;  and Jamaican Jerk – a tropical blend of peppers, citrus and pineapple.

“Many consumers want to cook with new flavors, but aren’t always sure how to,” says co-founder Jim Dygas. “Our new taco sauce line delivers an approachable introduction to experimentation in the kitchen, by starting with an easy-to-prepare base and inspiration on how to get creative with toppings and garnishes to create extraordinary tacos.”