In a move that would appear to be related to its recent supply deal with Amazon, a subsidiary of wholesaler SpartanNash has inked a $25.7 million deal to lease a 363,872-square foot food distribution center in Severn, Md. from owner Provender Partners.

The deal, between Provender and SpartanNash’s subsidiary Nash Finch Co., was signed last week, and provides SpartanNash with a massive facility offering freezer, cooler and ambient temperature warehouse space providing access to the densely populated Northeast market, a Provender spokesman told WGB. The lease term is for seven years—the same length of an extended distribution agreement between SpartanNash and the Seattle-based e-commerce giant with big ambitions to take on the U.S. grocery industry. That deal—which includes a stock warrant options that would allow Amazon to acquire up to 14% of the distributor and calls for Amazon to make $8 billion in purchases over the life of the deal—was disclosed in financial filings late last week and comes as Amazon looks to accelerate its U.S. grocery sales in part through a newly launched grocery store.

A spokeswoman for SpartanNash declined comment to WGB on specific clients it intends to serve out of the Severn distribution center, saying only that it would “better serve customers in the Northeast.” Amazon has not commented specifically on plans for grocery stores beyond confirming a handful of sites in the country identified as additional units of the Amazon Fresh concept, which debuted last month in Los Angeles.

Sources tell WGB they anticipate Amazon could build hundreds of such stores, however. “Whatever you think is coming, it’s probably 10x more than that,” industry consultant Neil Stern, now the CEO of Good Food Holdings, told WGB last month. “One store in Woodland Hills is sort of ‘So what?’ It will take hundreds of stores if not thousands, and some market concentrations on top of that, to be truly significant.”

Beitz and Daigh Geographics’ Planned Grocery tool, which tracks potential new stores through public reports, news accounts and other sources, indicates Amazon is currently in some stage of development or planning at 15 store sites in the Northeast including a cluster of six near Washington D.C., four near Philadelphia, and five around New York. 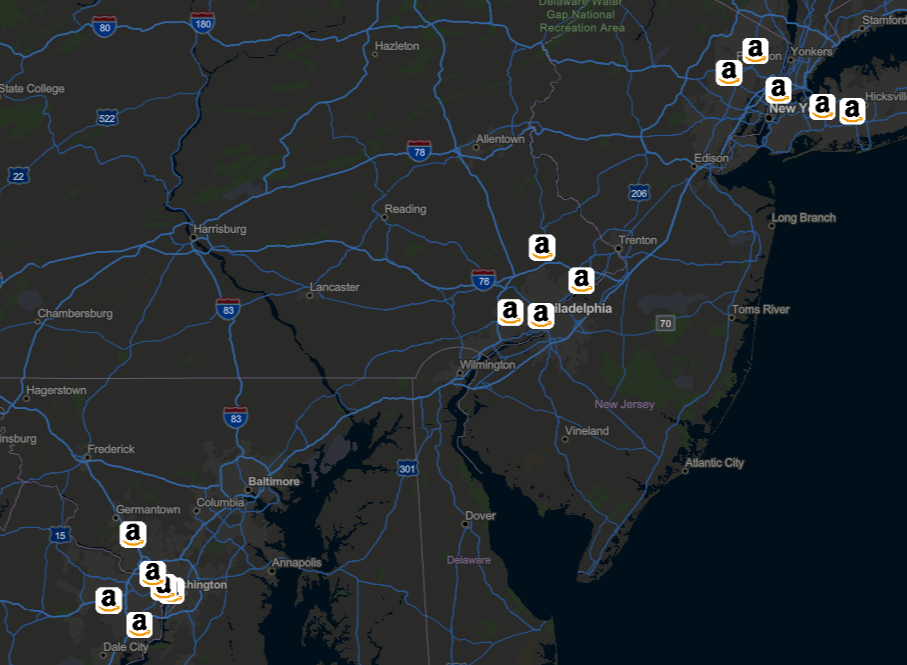 Amazon has a separate supply agreement with SpartanNash’s rival, United Natural Foods Inc., to provide wholesale groceries to its owned Whole Foods Markets stores. That deal, which provides approximately 18% of UNFI’s annual sales, is to expire in 2025.

A SpartanNash careers page indicates it is now seeking workers in Severn, including some warehouse supervisors and directors.

Provender is a Newport Beach, Calif.-based investor in food-related industrial buildings. Its site at 8024 Telegraph Rd. in Anne Arundel County, was built in 1989 and formerly belonged to the big foodservice distributor US Foods before it closed in 2016. According to a spec sheet, it has 48 loading docks and parking for 162 tractor trailers.

“The Mid Atlantic Food Center provides access to more than 9 million people living in the Baltimore Washington Corridor,” Neil A. Johnson, founder and CEO of Provender Partners, said in a release. “A 7-year lease with a company of this size provides further evidence of the need to provide ‘last mile’ distribution to densely populated areas of the United States. As our country experiences unprecedented food supply challenges, unique solutions are required to prevent further disruptions to both consumers as well as our farmers and food industry workers.”

A Big and Fast-Growing Customer

SpartanNash serves a variety of retail and other customers including a sizeable military business served in part through a large distribution center in Landover, Md., not far from Severn. Amazon—which has been buying wholesale from Spartan to support direct-to-consumer business since 2016, could already be one of the distributor’s largest and fastest-growing customers. SpartanNash in its most recent annual report said the discounter Dollar General accounted for 17% of its consolidated sales in 2019 but that no single other customer exceeded 10% of its sales. However, Barclays analyst Karen Short in a note to clients last week estimated Amazon, thanks in part to COVID-related sales growth this year, could represent roughly $1 billion of Spartan’s overall sales this year, which would be about 10% of its total sales. That figure could grow eightfold with the new distribution agreement.

Short in that note also raised the possibility that given Amazon’s expected appetite for retail sites, its stake in SpartanNash could potentially provide it with store acquisition opportunities. SpartanNash has historically offered itself as a kind of “exit strategy” for independents and small chains it serves, such as the 21-store Martin’s Super Markets chain it acquired in late 2018.

SpartanNash said its food distribution segment supplies grocery products to a diverse group of approximately 2,100 independent retail locations with operations ranging from single stores to regional supermarket chains, foodservice distributors, and to its more than 150 corporate-owned retail stores. SpartanNash’s greatest sales concentration is in the Midwest and South, but it operates in all 50 states by leveraging a platform of 18 distribution centers, and third-party shipping partners.