United Natural Foods officials were upbeat while reporting what its CEO described as an “outstanding” fiscal second quarter and projections that the wholesaler would meet the high end of its financial guidance for the fiscal year while anticipating “dramatic” packaged goods price inflation, continued strength of the food-at-home trend and more customer wins that could provide tailwinds for the longer term.

The Providence, R.I.-based wholesaler also announced it would be launching a Marketplace-style e-commerce offering to its retail partners providing direct delivery of "tong-tail" items and new brands from suppliers.

Stock in UNFI soared by more than 15% to a 52-week high following the report early March 10.

For the quarter, which ended Jan. 30, sales increased by 7.1% to $6.9 billion while turning a $31 million net loss last year to a $59 million quarterly gain. Adjusted EBITDA increased by 57.3% to $206 million, beating Wall Street estimates. Officials affirmed fiscal-year guidance but said its earnings per share and adjusted EBITDA figures would likely come in the top of the ranges previously shared. This indicates that earnings per share growth could exceed a 21.2% midpoint growth guidance and adjusted EBITDA would grow more than a midpoint range of 5.5%.

Officials said UNFI’s quarterly sales to chains increased by 6.5%; sales to independent retailers by 9%; sales to its “supernatural” or Whole Foods Markets by 7.2%; and sales to its owned retail stores, primarily the Cub Foods banner, increased by 15.2%. Same-store sales at Cub increased by 15.3%, and e-commerce at Cub grew by 190% in the quarter. UNFI’s private-label sales were up by 7.3%.

CEO Steve Spinner ascribed rising sales to increased “cross-selling” opportunities that take advantage of the mix of natural food and conventional assortments to new customer wins and to consumer behavioral changes that came with COVID, which he believes will continue—notably a trend among food shoppers staying “close to home,” which supported performance among chain and independents retailers, and the “food-at-home” trend that he said could remain elevated for “several years” citing a slow return to offices. 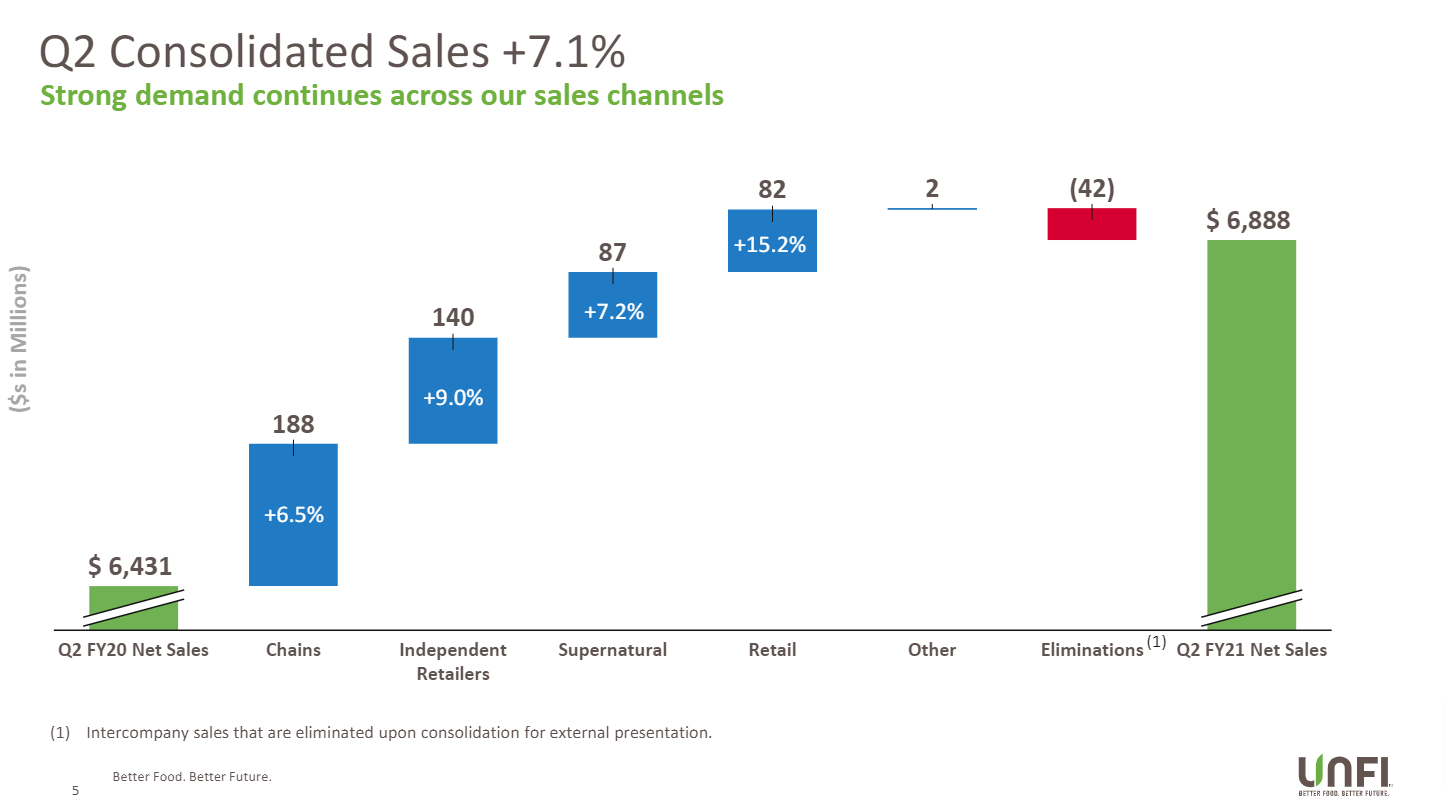 “Companies continue to push office return dates further into the future as they evaluate return-to-work strategies in light of increased productivity, and work flexibility that come with working from home,” Spinner said, according to a Sentieo transcript. “At the same time, many Americans continue to manage their household budgets closely with dining in providing a more affordable meal option and a great opportunity to connect as a family. Consumers also continue to look for better food options with ingredient transparency, and UNFI continues to lead the way forward in this important segment. We expect this backdrop will continue to provide a tailwind for us as we pursue growth within the $140 billion addressable wholesale market, of which $38 billion comes from gaining share of wallet with our current customers and an additional $78 billion from adding new customers.”

Officials said they were projecting that food inflation could return strongly later this calendar year as supply chains and manufacturer assortments recover—and added manufacturer input costs get passed along—from the compromises they experienced as the pandemic swept the country in 2020. That could help UNFI’s sales picture as it has historically benefitted from the increase in promotions that are likely to accompany the rising prices.

“We have very marginal inflation right now,” Eric Dorne, UNFI’s chief operating officer, said in an exchange with an analyst in the call. “But we do expect that the inflation rate will start to ramp up, I think, pretty dramatically. I don’t have any facts that would say it’s going to happen other than I’ve been doing this a long time. And based upon what we see in the pipeline, I think one could make the assumption that inflation will start to ramp up pretty dramatically” in late summer or early fall.

“And what will also happen at the same time is a pretty significant increase in the promotional rate as the CPGs really work hard to get the products back on the shelf, product that was discontinued. And so we'll start to see a lot of that promotional activity return. And so that will be a pretty significant tailwind for us as we go into 2022 because, obviously, we do make a profit on retailer promotions, and the math of inflation just works in our favor in a really big way.”

Chris Testa, UNFI’s president, said the company in coming weeks would be introducing a marketplace-style e-commerce offering called Community Marketplace that will give its retail partners the option of adding growing on-trend brands from UNFI’s suppliers to their websites. This is an extension of the Easy Options solution it already offers.

“Similar to other e-commerce marketplaces, sales on UNFI’s proprietary Community Marketplace will bypass their traditional distribution through our [distribution center] network and allow for smaller emerging brands to be ordered and shipped directly to retail customers throughout the U.S. This will give our customers access to an even broader assortment of items, with flexible order sizes and convenience to order from multiple sources online in one place.”

This offering would give suppliers—including emerging brands looking to crack warehouse distribution—up to 30,000 unique locations to market items while providing retailers access to a broader online assortment.

Also new to UNFI’s service offering to retail customers is a partnership with the Coin Cloud service that provides in-store kiosks in which customers can buy, sell or trade digital currency with cash without the need for a bank account or debit card. Testa said UNFI has already signed 80 contracts for these units “and we see this potential to grow to 4,000-plus UNFI locations.”

The company during the quarter also expanded a zero emissions all-electric trailer pilot with 53 new trailers that will operate in California, Spinner said.