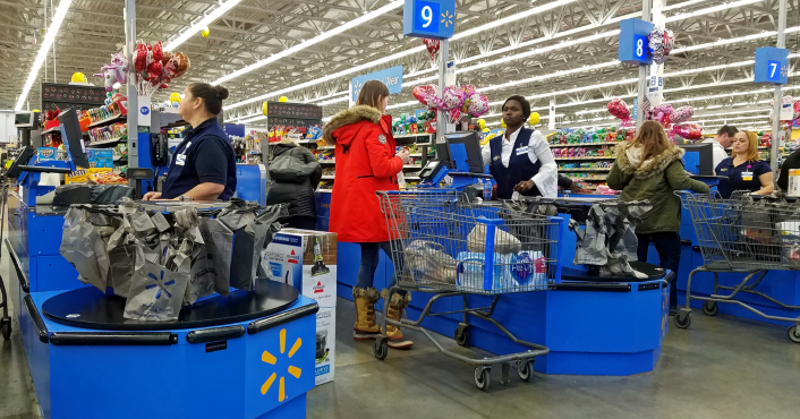 It was a different tone than investors and analysts have heard from Walmart President and CEO Doug McMillon throughout much of the past year in Walmart's first-quarter 2023 earnings call on May 17.

"We're not happy with the profit performance for the quarter," McMillon said in recapping the first quarter—one that saw better-than-expected sales growth at Walmart U.S. stores but a bevy of higher-than-anticipated costs, which drove income and earnings per share (EPS) lower. Walmart Inc.'s gross-profit rate for the quarter was 23.8%, a decline of 87 basis points. EPS and adjusted EPS were down more than 23% to 74 cents and $1.30, respectively. Operating income, too, fell 23%, to $5.3 billion.

The worse-than-expected bottom-line performance led Walmart to make the unusual move of updating its full-year guidance after just one quarter of the fiscal year; the company lowered its full-year EPS projections from an increase in the mid-single digits to a decrease of about 1%.

"We're going to change the business model of the company to be more profitable" and "make this as isolated of an issue as we can," said McMillon, who told analysts in November that "fighting inflation is in our DNA."

The sources of the higher costs in the first quarter were varied: One factor thwarting expectations, McMillon said, was that nearly all Walmart associates who had been out on COVID leave during the initial omicron surge went back to work in February, leaving Walmart with "weeks of overstaffing." That issue has been resolved, primarily through attrition, said McMillon, but "it just took some time over March and April to get wage costs in line with sales."

In addition, said outgoing Chief Financial Officer Brett Biggs, the first quarter proved to be "one of the most challenging periods yet related to supply-chain disruptions, increased costs and persistently high inflation." While the company continued to pass along many supplier price increases, the spikes in fuel prices exceeded Walmart's ability to take pricing in that important category, Biggs said. Fuel costs in the U.S. ran $160 million higher than expected in the quarter.

Consumers, too, shifted their spending—notably, away from general merchandise and toward grocery, where Walmart reported that it had once again gained share during the quarter.

"The rate of inflation in food pulled more dollars away from GM than expected," McMillon said, as consumers moved their dollars several aisles over to cover rising grocery costs and units per basket declined slightly. Walmart saw some shifting within consumers' grocery spend, too: away from national brands and toward private labels, particularly in categories such as deli and dairy.

The spending trend toward grocery and away from general merchandise in the first quarter has inflated existing general-merchandise inventories, the company noted, although rollbacks in apparel and other general-merchandise categories are expected to help Walmart sell through those in the next two quarters. Further, rollbacks in categories such as sporting goods are all the more eye-catching now, McMillon said, given that consumers have been keenly aware of higher prices and have found fewer markdowns across grocery retailers. "You end up with a bunch of buyers that are portfolio managers," he said.

"Different customers are in different places," Furner said, given that Walmart's shopper base spans the full geographic, demographic and income spectrum of U.S. consumers. But with consumer price inflation running at 8.3% in April and food-at-home inflation hitting 10.8%, "Not all [consumers] can afford to absorb this, and they need our help," said McMillon.

"And so we do stay focused on opening-price-point food items—a loaf of bread, a gallon of milk, a can of tuna, mac and cheese—protein categories," McMillon continued. "Are we helping the family that’s at the lower end of the income scale be able to afford to feed their families during this inflationary time?"

Following a disappointing bottom-line performance in the first quarter, "We're motivated to have a really strong year," McMillon concluded. Although, "There seems to be more uncertainty now in a very uncertain environment," he said, "we'll deal with that, and we like the hand that we’ve got to play."

Offered Biggs: "It's one quarter into the year, and there are a lot of levers to pull."

Walmart+ Adds In-Home Delivery As Another Plus

Leverage Trending Cuisines to Drive Sales in the Meat Case

Evolution of the Meat Case

Reaching a Younger Demographic in the Meat Aisle

Why Automation Wins for Grocers' Workforce