The rise of sparkling water and the decline of carbonated sodas seemingly go hand in hand. And with the popularity of sparking water, how can manufacturers stand out in an already crowded category? One proven way: Add alcohol.

Alcohol-infused sparkling water, often called hard seltzers, have generated super-sparkly sales in recent years, and might well be the contributing factor behind the decline in wine sales, which are down for the first time in 25 years.

As the new wine spritzer, hard seltzer has long been the darling of the millennial set, but sales have skyrocketed beyond the cliched image of a bearded hipster clutching a White Claw—when he could actually find one to buy, that is.

“The seltzer category started with a strong following from women, millennials and higher-income households. Now, the consumer base is diversifying,” says Sara Hillstrom, senior director of category development for Anheuser-Busch, St. Louis.

Sales hit nearly $1.7 billion in 2019, according to New York-based Nielsen, up from a little more than $6 million just four years before. Hard seltzers are also maintaining a 215% growth pace across retail.

“Hard seltzer sales in the United States have taken off in part by aligning with consumer interest in health and wellness, as these drinks generally feature fewer calories, carbs and sugar than heavier beers, wines or cocktails, and are on the low end in alcohol by volume,” says Danelle Kosmal, VP of beverage alcohol for Nielsen. “Consumers also value the convenience, assortment and bold flavor options of hard seltzers.”

Hillstrom agrees that health-consciousness is a contributing factor to the rise of hard seltzer. “The hard seltzer category is seeing massive success because seltzers deliver on consumers’ desire for flavored, sessionable beverage choices,” she says. “Combined with the low-sugar, low-carb and under 100 calorie attributes most brands have, seltzers are a force to be reckoned with.”

For Barons Market, with eight stores in the San Diego area, the trend began with hard kombuchas, says SVP Rachel Shemirani. “That was the big push. And we still do really well with hard kombucha, and also cocktails in a can. As soon as the hard seltzers came out, we thought, ‘OK, we’ll just carry Truly.’ And it went crazy,” she says. “Then we said, ‘OK, now we’ll get the White Claw.’ Then we sold out of White Claw. For months we were selling out of White Claw. Now, any kind of new brand that we see that has a coolish label, we’ll bring in.” 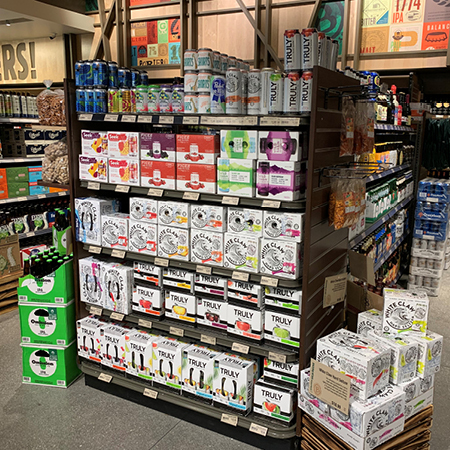 Barons’ stores now carry more than a half-dozen different brands of hard seltzers and merchandises them both on the shelf in an endcap and in the refrigerated section. Its stores near the beach sell more out of the refrigerated case for immediate consumption, while its in-land stores see higher sales from the grocery shelves, Shemirani says. The brands available range from those available nationwide (White Claw and Truly) to local companies such as Novo Brazil, which is a local craft beer brewery that expanded into hard kombucha and now hard seltzer.

Beer Gets in the Game

The seltzer market was perfectly positioned for beer manufacturers “to capture millennials and women [Gen] Xers and boomers who were invested in health and wellness as a luxury category,” says Kelly Ravestijn, VP of strategy planning for Stamford, Conn.-based IN Connected Marketing. “Hard seltzers are seen as a way in which to indulge while not compromising—all in convenient single servings.”

Beyond craft brewers, several beer companies are capitalizing on this opportunity. “Pabst Blue Ribbon is even making a seltzer,” Shemirani says. “Which is pretty perfect, because that's definitely the hipster beer.” Pabst Blue Ribbon’s Stronger Seltzer has an 8% ABV.

Anheuser-Busch recently debuted its own hard seltzer, under the Bud Light brand name. “With seltzer penetration at 10%, we decided to lend the name of the most recognizable brand in the category to a seltzer,” says Mike Potthoff, VP of large format for Anheuser-Busch. “Bud Light Seltzer will change the game because it appeals to consumers of all demographics. We’re already seeing success with this strategy; Bud Light Seltzer is more popular with Hispanic and African American shoppers than other seltzer brands.”

While larger beer manufacturers are getting into the category—which has been dominated by two main players: White Claw from Mark Anthony Brands and Truly—craft manufacturers definitely have a place, evident in the selection available at Barons Market.

“As retailers look to manage this growing segment and provide variety for consumers, they should seriously consider local and craft players to help create diversity in their selections and draw in new consumers that lean toward a more unique kind of offering,” says Lauren Carroll, brand manager for Wild Basin, a “boozy” sparkling water brand based in Longmont, Colo.

Hillstrom of Anheuser-Busch also predicts that the diversification of the customer base will also lead to more diversification in product selection from manufacturers. “Expect to see seltzers with a broader ABV range. For example, White Claw 70 at 3.2% vs. Four Loko Seltzer at 14%. Also expect to see new attributes entering such as organic and natural flavors,” she says.

Carroll agrees: “New flavors and wider ABV range will provide craft drinkers with a seltzer for every occasion.”

The category will continue to see steady growth; however, its current rate of growth will likely slow as sales continue to grow. “The United States has a long way to go and grow before we capture the same market share and spend as our Canadian neighbors and U.K. and European cohorts,” says Ravestijn, of IN Connected Marketing. “Hard seltzer is in its rapid growth state, where there is a land grab for consumer interest and first-to-market innovation.”