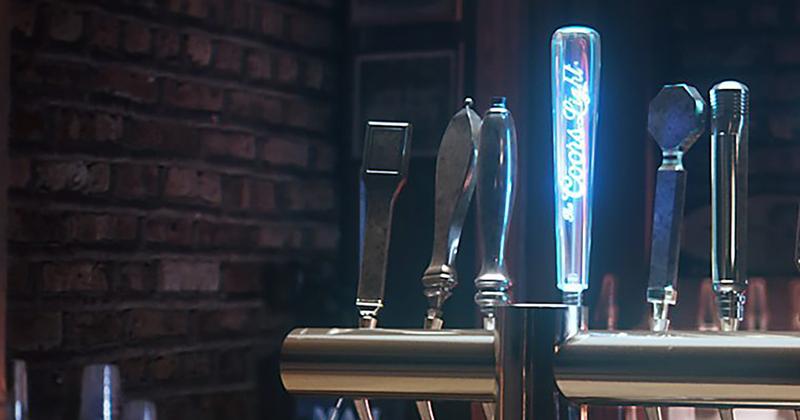 In a bid to rag on competitor Bud Light, Coors Light is coming out with a smart tap that is programmed to illuminate whenever Bud Light talks about Coors Light on social or broadcast media. When the tap glows, all bar patrons of legal age will get a Coors Light on the house.

The move is in response to a campaign from Bud Light calling out Coors Light and Miller Light for using corn syrup in their products.

“When they bring hate, we will literally bring light,” Ryan Reis, VP of the Coors family of brands, said in a statement. “The more Bud Light talks, the more we refresh.”

The taps will launch March 22 in select bars in five cities: New York, Philadelphia, Dallas, Omaha, Neb., and Las Vegas, which will coincide with the national college basketball tournament. A simplified version will be available more widely across the U.S.

“Bud Light has been attacking us out of frustration and criticizing our ingredients for weeks now,” Reis says. “We know drinkers don’t want to hear it. They want to move on. And according to a survey we conducted last week, 80% of premium light drinkers said they just want to enjoy a refreshing beer without being subjected to a debate about ingredients. So we’re giving it to them.”

Heineken USA has a range of colorful new promotions in-store, including a Cinco de Mayo-inspired initiative, a campaign tailored to boxing fans and a summer music sweepstakes.

The brewing company’s Dos Equis and Tecate brands will be at the forefront of its “Grab Cinco by the Cervezas” campaign featuring on- and off-premise merchandising as well as social media outreach. Retailers will be able to take part in the campaign with displays featuring the beer brands as well as Jose Cuervo tequila, which will create a one-stop party supply shop for shoppers.

As boxing fans get ready for the May 4 fight between Saul “Canelo” Alvarez and Danny “Miracle Man” Jacobs for the World Middleweight title, the Tecate brand will revive its boxing promotion that connects fans with sweepstakes and other promotions. The Tecate-driven promotion will invite fans to “Throw a Knockout Party” through a fully integrated marketing program, including fight-themed POS displays and cross-merchandising opportunities with Jose Cuervo.

Looking ahead to summer, Heineken will be launching a music-based campaign April 15 featuring special music packaging and daily music-themed prizes. The special packaging will be available in six-, 12- and 24-pack bottles, as well as shelf displays and cooler merchandise that encourage shoppers to enter a daily sweepstakes.

In an effort to reach its sustainability goals, Anheuser-Busch has partnered with Indigo Agriculture. The brewer, which has included rice in its beer recipes since 1876, will use 2.2 million bushels of sustainably grown Indigo Rice, which will reduce water and nitrogen use by 10% and achieve at least 10% savings in greenhouse gas emissions compared to state benchmarks, according to company officials.

Indigo Agriculture uses field team and data collection tools to ensure its rice has a lower environmental impact. The partnership will allow growers to earn a premium for using sustainable practices and and enjoy yield increases due to the Indigo microbial seed treatment for rice. The initiative will also help create a U.S. market for sustainable grown rice.

Additionally, Anheuser-Busch and USA Rice are partnering for the third year in a row. The company will donate $150,000 to USA Rice to support the organization’s Rice Stewardship Partnership, a public-private partnership between USA Rice, Ducks Unlimited, the U.S. Department of Agriculture, and supply chain partners that helps farmers transition to sustainable practices.

The search started in 2015, but viable beer was not discovered until 2017 when the team dug 15 feet into the sea bed and an additional six feet into the ship to gain access to the loot.

The yeast taken from the beer bottles was then cultured in test tubes, with microbiologists giving a helping hand, and was test brewed in batches over the subsequent two years.

The brewer believes the yeast came from a lineage used by Bass brewers in England which manufactured the now defunct King’s Ale. The beer is said to have a “slightly fruity taste with a hoppy finish,” according to the AP.

Adams said the beer is a “replication of what would have been served on that ship in 1886. We want people to have a small taste of what life was like as a passenger on this ship.”