In the not too distant past, folks would either enjoy their favorite adult beverage in a restaurant or pub, or they would grab a six-pack or two for their homes or group gatherings. But with the abundance of outlets now in the act, along with a wide variety of new products and line enhancements, retailers are seeking out fresh ways to keep pace with the shifting dynamics presently in play.

Coupled with stiffening competition from different channels, these threats are prompting grocery retailers to give shoppers something they can’t get online or in a dollar store—something tall, cool and refreshing.

A growing number of grocery stores are selling adult beverages—most often beer and/or wine—for consumption on store premises. Upscale independents have been offering in-store pubs since the mid-2000s, and Whole Foods became one of the first major chains to take the plunge about eight years ago. Other major food retailers with in-store pubs in at least some of its stores include Publix, Hy-Vee, Wegmans, Albertsons, Giant Eagle and Weis Markets, to name a few. 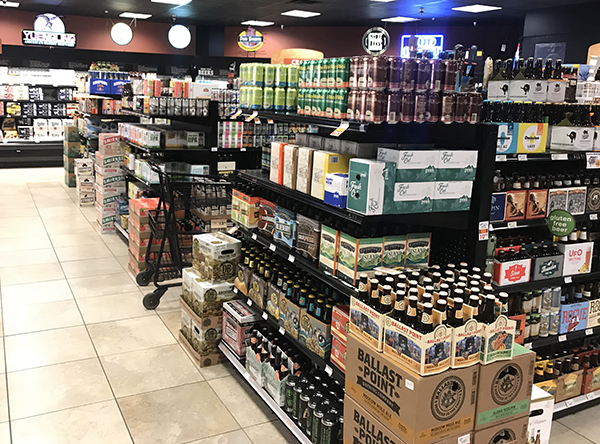 On-premise alcohol consumption serves several purposes for retailers, imparting a destination aspect to the store while enhancing the shopping experience and encouraging shoppers to linger a little longer. It also allows the store to highlight beers and other products that are available for package sale in close proximity to the pubs. And in many cases, it rounds out the foodservice experience, which has become increasingly important in today’s food stores, as illustrated in WGB's inaugural State of Retail Foodservice annual report. 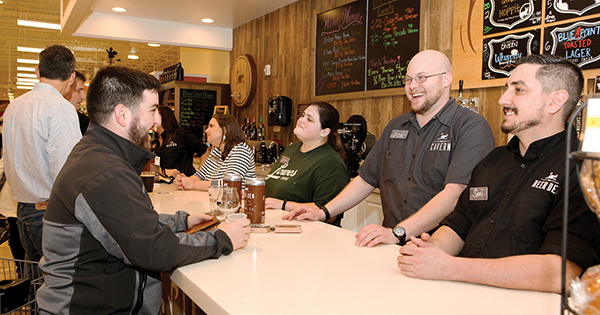 One of the primary benefits of in-store pubs is that they allow stores to showcase products that are for sale elsewhere in the store. “It’s a great place to get trial for different adult beverages that the store is promoting,” says Randy Burt, a partner in the consumer goods and retail practice at consulting firm A.T. Kearney. This can involve food as well as beverages; for example, by showcasing meal kits and demonstrating how particular wines and beers pair with the different foods.

In-store pubs can also be a good place to introduce unique beverages that don’t fit into particular niches. Bundaberg Brewed Drinks are soft drinks in flavors including root and ginger beer, blood orange, peach and guava. Although they’re legally classified as nonalcoholic beverages, the brewing process leaves them with a residual alcohol level of 0.5%, and the company markets them only to consumers over 18. One use that Bundaberg promotes is as mixers in cocktails.

“While some of these [in-store] bars right now have restricted wine and beer licenses only, the offer of a nonalcoholic option like our ginger beer makes sense, as does having it as a premium mixer for those who do have the extended spirit license,” says Derika Legg, Bundaberg’s general manager USA. “In fact, we’ve already shown success with sampling alongside Ralph’s in-store bars in California. Our beverages make a great addition to bar menus since they do double-duty as a flavorful mixer and an upgraded nonalcoholic option.”

Premium spirits company Beam Suntory sometimes designs in-store marketing around holidays; one example is its use of Cinco de Mayo to promote its Sauza and Hornitos tequilas. “Allowing them to sample our products while at the retailer is an excellent way for us to introduce new offerings and to recruit new consumers,” says Dominic O’Brien, general manager for national accounts.

“In terms of the opportunities for merchandising, for symbiosis or meshing into the operations of the store, I don’t think there’s any question that that opportunity is there,” says Bill Bishop, head of retail consultancy for Brick Meets Click. “The only thing is, it varies by what the physical setup is,” which often depends on how much space the store has available and what it wants to accomplish with alcohol sales.

Fernando Castillo—head of design services for api(+), an architectural and design firm that specializes in retail space—has designed several such establishments. “It could be as simple as a big counter up against a window if they don’t have a lot of room,” Castillo says. “Or if they do have a lot of room, they always try to make it a little off to the side, with windows preferably.”

Oliver’s Market, an upscale California grocery chain, has Tavern Off the Green as part of its store in Windsor, about 40 miles northwest of San Francisco. “It’s within the store,” says Michele Pedro, the store’s bakery and tavern manager. “It’s not quite enclosed, but it’s off into its own little corner of the store.”

The idea in almost all cases is to establish a sense of separation from the rest of the store, yet stay in close proximity to its packaged beer offerings. “Even if it’s just a little bit, it needs to be defined,” Castillo says. “Not tucked away, not hidden, but with some kind of sense of differentiation from the main aisle and the main supermarket gondola runs or freezer runs. It needs to have some kind of sense of enclosure and definition.”

Having that separation allows stores to require customers to drink within the bar space, which most of them do, whether as a requirement of local laws or just as a matter of policy. However, some stores, such as Lucky’s Market, encourage customers to take their beer with them as they shop.

Burt of A.T. Kearney sees the merits of allowing shoppers to imbibe while they wander the aisles: “You’re not going to be rushing through shopping, and you’re probably more willing to stop and talk to people that are maybe doing trials or some sort of shopper marketing in the store.”

Even if shoppers are required to remain in the in-store cafe, having adult beverages available makes the store more of a destination and gives customers an incentive to stay in the store longer.

“If shoppers have a few minutes, it’s nice to be able to go there, sit down, chill out and not be running so much,” Castillo says. “That’s why you do the community tables, the booths, the bars. They try to mix it up a little bit, so you get the feel of a little restaurant.”

Bars within supermarkets are largely a value-added service for shoppers, but they can be destinations in their own right. Burt recalls that on a visit to a Jewel-Osco in Chicago’s affluent Gold Coast neighborhood, the in-store pub had a nice mix of people. “It was a Saturday afternoon at 5 o’clock. There was no place to sit. It was jam-packed with people,” he says, some of whom “had shopping bags, and some who didn’t.” There was a combination of people that were there to do their food shopping and others who were there strictly for the bar, he says.

In-store bars have some inherent attractions. They’re in a more benign, less intimidating setting than many regular bar establishments, with no loud music or chatter. The drinks are also likely to be a significantly better bargain, just as on-premise food often is. This is because the profit motive isn’t as strong as it would be for a stand-alone bar or restaurant.

Bishop says foodservice establishments usually charge about three times the cost of the food or beverage ingredients, while retailers make calculations by margins, typically 35% to 40%. “I think there’s probably going to be a tendency—because retailers do like to follow their normal pricing patterns—for the retailers to charge a lower price, just because they’re thinking of it in retail terms vs. thinking of it in foodservice terms,” he says.

Clearly, a glass of beer or wine can help get grocery patrons more into the shopping experience, and in turn, help grocers enjoy more robust profits.