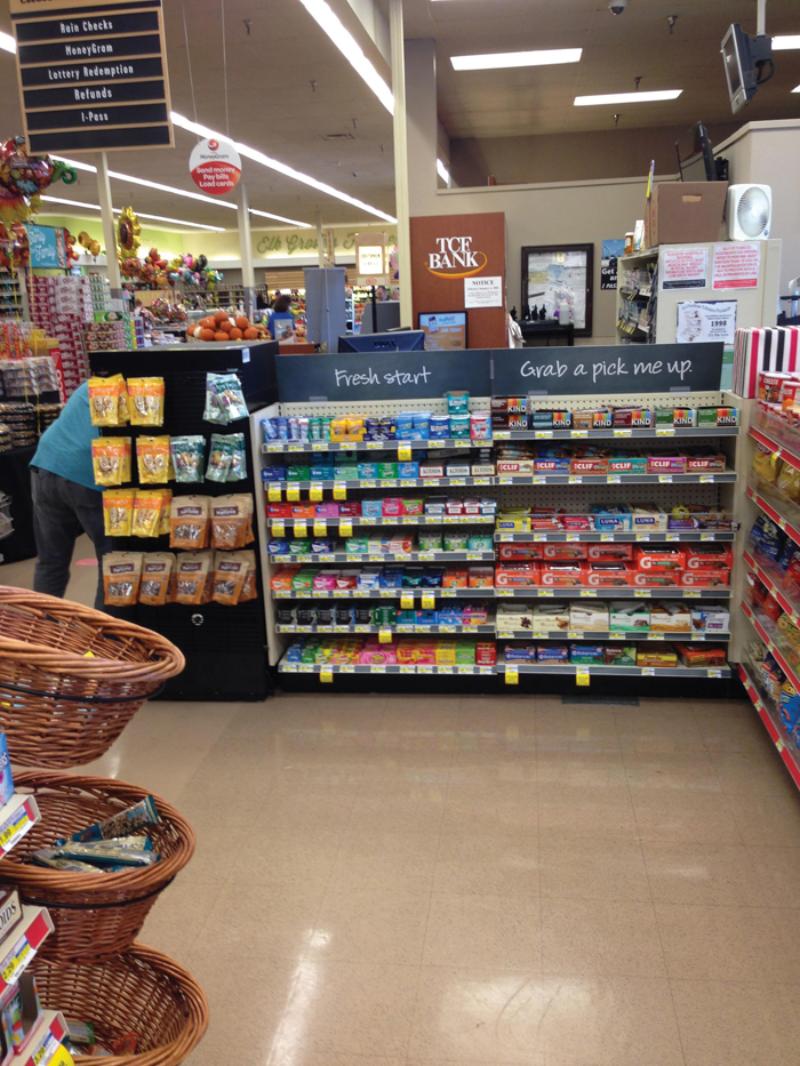 After checking off their shopping lists and filling their carts, many shoppers are ready to reward themselves with a treat. Grocers can help meet this need, and sweeten their own sales, by making sure they have candy for every craving available in convenient locations around the store.

Recent research from Mars Chocolate and Wrigley, two business units of McLean, Va.-based Mars, details shoppers’ emotional journey as they make their way through the store, pinpointing the checkout as the “emotional low point” of the shopping trip. Retailers can help make this low point a little bit sweeter and capture impulse purchases by merchandising to meet the needs of shoppers who are looking for a way to refresh and recharge after the “chore” of shopping. Retailers can also appeal to shoppers who are looking for a treat or reward like chocolate or non-chocolate candy, explain Mars officials.

Mars and Wrigley have worked with dozens of retailers to design customized solutions to help drive impulse sales with their Transaction Zone Vision, which studies where shoppers purchase goods and services, calling them collectively “transaction zones.” The front end is the largest impulse-buy area of the store, but shoppers are also making impulse buys in other transaction zones, including the pharmacy, café, on their mobile phones and via “buy online, pick-up in store” models. The takeaway from Mars’ research is that retailers and manufacturers have an opportunity to increase conversion of impulse items in all of the named transaction zones, and collaboration between trading partners to optimize merchandising at the front end in ways that can be applied across transaction zones is key.

Tiffany Menyhart, director of U.S. category management at Wrigley, says more than a dozen retailers across channels have worked with Wrigley and Mars Chocolate to bring these insights to life, and are seeing tangible results.

“We know as industry leaders in front-end merchandising that we have to invest in insights that help our retail partners build their baskets and leave a lasting positive impression on their shoppers,” notes Menyhart. “By investing in the Transaction Zone Vision, we have provided our retailers a framework that guides them in how best to satisfy their shoppers’ needs by offering choices.” The customized programs, she continues, “are helping our partners maximize sales across all categories at the front end.”

Jewel-Osco recently worked with Mars and Wrigley to help reinvent its transaction zones and has seen positive results.

“There were no confections in the original queue design,” says Jeff Hancock, assistant sales manager at Itasca, Ill.-based Jewel-Osco. “Mars/Wrigley brought global insights around categories that should be represented that align with the shopper needs and states of Refresh, Reward and Remind. Confections was one of those key categories so they were added to the POG for the queues in eight test stores, along with other missing categories. Through qualitative shopper research we found that Total Front End Conversion increased 57 percent in test stores versus the control.”

Some insights from Mars/Wrigley’s global study that were shared with Jewel-Osco officials include that a clear path of where to queue quells shopper anxiety, and representation of categories that are critical to driving increased baskets and buyer conversion are beverages, confectionery and snacks. Hancock was also advised to alternate and repeat the top categories represented in a queue environment to maximize sales and buyer conversion.

“Mars and Wrigley shared with me the output from their proprietary tool that helps to determine best space allocation for Jewel, along with optimal adjacencies,” Hancock says, also adding that Jewel-Ocsco plans to add more large bags of candy for the upcoming Halloween season that retail for $9.99 and up.

“The segment experienced the largest sales increase in 2016 and we have ordered accordingly for 2017,” affirms Hancock, who notes, “We actually are going to offer a 7-pound bag of Chocolate Favorites from Mars this year that will retail for $24.99.”

“Each season connects to shoppers’ emotions differently, and confectionery products in particular are associated with seasons, says Larry Lupo, vice president of sales - grocery, convenience and drug channels, Mars Chocolate North America. “Seasonal has transitioned into relevant moments and continues to grow as the most permissible time of year for the confections category. Shoppers are finding ‘mini’ moments to enjoy the holidays – like parties and celebrations, baking and movie nights – which equate to longer seasons and more opportunities to buy.”

Halloween is more than one day, as consumers are celebrating with more and more usage occasions such as back-to-school, decorating, baking and parties. Seasonal confection sales continue to increase and shoppers seek out seasonal flavors, like M&M’S Brand White Candy Corn Candies and Dove Promises Peppermint Bark, say Mars officials, adding that it has also continued to see a growing demand for seasonal shapes. This year, Mars added new DOVE Chocolate Peanut Butter Eggs to its Easter line-up, which joined other seasonal shapes such as Twix Hearts, Eggs, Ghosts and Santas and Snickers Hearts, Eggs, Pumpkins and Trees. Gifting is also growing, and shoppers seek out gifts with a unique flavor or personal touch. This Christmas season, Mars will introduce a floor stand that contains six each of the Snickers Brand Yard and Twix Brand Yard.

Candy is doing well overall. Chocolate and non-chocolate combined grew 2 percent – ahead of total store growth of 1.5 percent, according to insights from the National Confectioners Association. Non-chocolate seasonal items saw a 2.2 percent sales increases with a particularly strong Easter period. Seasonal periods continue to drive massive incremental business and provide great opportunities for cross-merchandising with other meal or celebratory items.

Retailers actually added items to candy and chocolate rather than just rotating stock, say NCA officials. Chocolate saw an additional 4 percent in average items per store and non-chocolate an additional 6.5 percent. New items have been a consistent driver of growth in the past few years, according to the NCA, with innovation likely to continue to drive dollars in the coming years. Retailers are still filling candy sections with the top players, but mid-market manufacturers have dialed up innovation. They saw a 3.5 percent sales growth, versus 1.1 percent for the category and accounted for 48 percent of new sales versus their market share of 27 percent.

New items have also proven to be a huge driver of candy sales. Shoppers tend to have their traditional favorites, but also like to try new and different items, particularly in gourmet and novelty in chocolate, and chewy in non-chocolate, NCA officials say. More than 5,000 items were launched in 2016, up from 3,500 the previous year. These items accounted for nearly $1.5 billion in new dollars and 1,500 of these items generated at least $100,000 in sales. As such, new item sales contributed 6 percent of the total candy dollars in 2016.

Over 2016, premium chocolate grew dollars nearly 10 percent on top of 16 percent in 2015. NCA officials say premium was also the only chocolate segment that grew volume. Premium accounts for more than 90 percent of the total new chocolate dollars, with absolute dollar gains of more than $150 million. NCA officials say they expect premium to continue to be a strong driver of growth throughout 2017.

Chewy is the star of the non-chocolate candy segment, making up nearly half of the entire category; the innovation seen in chewy along with the growing consumer uptake, drove a 5.3 percent dollar gain in addition to unit and volume increases. Chewy added more than $170 million new dollars in the past year. Shareables and minis have also been a hit with consumers as items designated by pieces, fun size and minis are geared toward portion control and accounted for more than $300 million in new sales, with $200 million for chocolate and $100 million for non-chocolate.

To meet this need, Hershey has introduced Reese’s and Hershey’s Crunchers as part of its portfolio, and will soon add Hershey’s and Reese’s Popped Snack Mix and Dipped Pretzels to the mix. The company has also been exploring the better-for-you snacking category and is working with retailers to help boost these products.

“Boosting sales of better-for-you sweets comes down to understanding the consumer, what they want from a snack, why they want it, when they want it and where they want it,” Kaplen says. “Snacking has changed so much over the past decade, but not much has been done in the retail space to reinvent with it. Retailers will struggle to see a boost in sales of new items, regardless of how good they are, if they don’t place them in areas of the store that are easy for consumers to find. Hershey is assisting retailers with placement strategies to solve this challenge and turn aisle exposure into category conversion.”