Plant-based products may be getting all the glory right now, but don’t count out meat. And the meat industry is prepared to continue to “steak” its claim, as evidenced by the bustling Annual Meat Conference (AMC) that just concluded in Nashville. Officials proclaimed record attendance for both participants and exhibitors at this year’s conference.

A powerful tornado couldn’t even phase this resilient industry—even after many had to evacuate hotel rooms for several hours to seek safe shelter because of the EF-4 storm. The show floor was hopping the next day, but all were concerned and sympathetic to the events going on beyond the Gaylord Opryland hotel; the storm killed 25 people and devastated many communities. Presenting co-hosts FMI and the North American Meat Institute directed all leftover food donations, 28,000 pounds of meat and poultry, to the Nashville Food Project to help local Nashvillians affected by the storm. The donation will provide 90,000 meals over six months.

As an AMC newbie, I really didn’t know what to expect, but the meat companies’ elaborate booth displays and product sampling for a single afternoon was surprising. Kent Harrison, VP of marketing and premium programs for Tyson Fresh Meats, noted that the conference was a see-and-be-seen type of event. His off-the-cuff analogy likened it to the homecoming dance for a high school girl—all day futzing for a few hours for everyone who would see her at the dance. 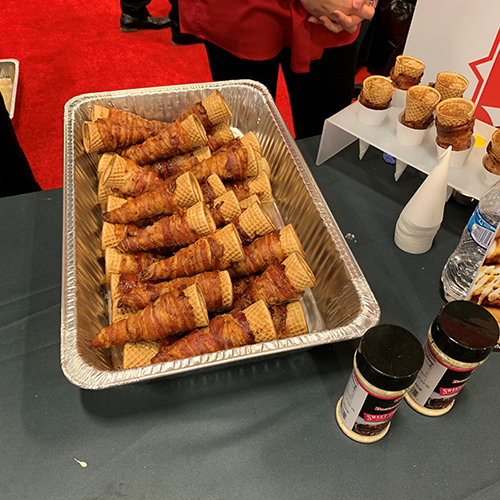 But those sleek exhibits accomplished their goal by drawing retailers in to see and sample all of the new products and old favorites they needed to be reintroduced to. There were bacon-wrapped ice cream cones from Amazing Taste Foods to inspire creative uses for bacon and add the protein in nontraditional treatments. Baja Jerky with flavors such as Salsa Fresca and Sweet Orange show that jerky can be anything but bland. Companies also expanded traditional brands beyond the well-known products, such as Tyson’s brisket beef patties branded as Ball Park. Others partnered with well-known brands outside of meat. For instance, Coleman Natural Foods partnered with Budweiser on a line of cooked sausage and other barbecue products.

Of course the conversations couldn’t ignore plant-based meats. While plant-based accounts for less than $800 million and less than 1% in sales, it can’t be ignored. Many of the meat companies alluded to the dairy industry and learning lessons from the situation with plant-based milk. For that reason, Tyson’s Harrison referred to the products as protein alternatives, leaving meat of the equation all together in a bit of a church-and-state situation. This language was chosen specifically by the company to help its ranchers and meat producers to keep the identity of their products as meat. Tyson’s Raised & Rooted brand nuggets don't have the word chicken on the packaging and instead proclaims it's made with plants.

Cargill, which also is a player in both meat products and plant-based alternatives, walks a similar fine line. Cory Lommel, director of consumer insights for Cargill, noted, “It’s an ‘and’ story, not an ‘or.’ ” He noted that animal protein consumption continues to grow, and beef consumption in particular is up. “There’s demand for protein in general from consumers, and the rising tide for protein lifts all boats,” Lommel added. Cargill is committed to animal protein even as it moves into plant protein; the focus is simply closing the protein gap.

The plant-based conundrum also leads into sustainability and transparency: hot topics of discussion. One consumer interviewed for the Power of Meat 2020 report indicated she didn’t want to know where her meat came from or how it was raised/processed because she already assumed it was bad and it would make her feel guilty. This perception is persistent among consumers even as industry associations find that there is no basis for it. However, suppliers can’t tell the story alone, and retailers will play an important role in educating their customers about the suppliers they are purchasing their meat from.

Either way, consumers are looking to retailers, more so than brands, to educate them on how to expand out of their purchasing comfort zones. This will also go a long way in increasing meat sales that have remained relatively stagnant.