The biggest growth in poultry in K-VA-T’s 124 Food City stores is in antibiotic-free, ranch-fed, humanely-raised chicken. “It resonates better with the customer,” says Steve Holloway, director of meat and seafood for the Abingdon, Va.-based company. He says shoppers aren’t deterred by the higher prices.

Claims such as the aforementioned are resonating with shoppers who care about the many aspects of raising  animals. For 66% of shoppers, the most important factor is whether the meat is better for them, followed by whether it is better for the animal (29%), better for the planet (28%) or better for the farmers/workers (26%), according to the Power of Meat 2019 report from the Food Marketing Institute, the Foundation for Meat & Poultry Research & Education and the North American Meat Institute.

Anne-Marie Roerink, principal with 210 Analytics, San Antonio, believes more can be done. “It’s important to talk about the farm, the farmer, the living conditions, etc.,” she says. “More shoppers are looking for what food can do for them, and protein is at the very top of their radar.”

“Our guests are seeking additional information,” says Goldsmith. “Our animal welfare policy includes a commitment to ensuring animals should and can be raised, handled, transported and processed in ways that ensure they are clean, safe and free from cruelty, abuse or neglect. We share this commitment in our annual corporate responsibility report and on in-store signage.”

According to Chicago-based market research firm IRI, sales of free-from chicken have grown by 5.4%. This compares favorably with conventionally produced chicken, which has flat sales at 0.7%. Chris DuBois, SVP of strategic accounts for IRI, says while antibiotic-free now constitutes 37% of chicken sales, he expects that number to inch up. Having these higher-priced products in the case helps retailers “bring in consumers who are willing to spend a bit more,” he says.

Harmons offers its own line of recipe-ready chicken, which is trimmed at the store level “so customers don’t have to do anything additional to it,” says Wesolowski. Half of fresh chicken breast sales are recipe-ready chicken, and breast in all its iterations (strips, cubes, etc.) tops sales, followed by thighs. Breasts split in half horizontally, to provide two thinner cuts, also do well.

SpartanNash has increased the merchandising space it gives to value-added poultry. “Today’ consumer is looking for convenience and products that are grill- or oven-ready,” Goldsmith says.

Items in the company’s more than 155 stores include grill-ready, hand-trimmed, seasoned or marinated chicken, and sales “are far outpacing the prior year’s sales,” he says. “Our meat counters also offer in-store-made fresh chicken sausage and chicken kebabs. And we recently introduced Fresh Divide in many of our West Michigan Family Fare stores, which offers presliced veggies that pair with our poultry options for a quick, easy and budget-friendly meal.”

Food City sells a lot of  value-added chicken, mostly through its self-serve cases. Best-sellers include marinated and dry-seasoned boneless breasts, tenders and kebabs. “Everyone’s in a rush, and they just want to throw their chicken on the grill,” says Holloway. “It’s also a way for them to experiment and decide whether they like certain flavors without spending a lot on spices.”

Value-add is indeed driving chicken sales, says DuBois of IRI. In the past year, it grew at about 4.1%—about twice as fast as non-value-add. “For the extra bit of work it takes to marinate meat or wrap something around it, the profitability goes way up,” he says.

Value-added chicken in particular appeals to younger consumers, because they can experiment with low risk and low investment, DuBois says. What’s ideal is to have half of the marinades in standard flavors, such as teriyaki, lemon pepper and Italian herb, “but rotating in something new like a Moroccan flavor or lime chile to add some sparkle,” he says. Some retailers will even mimic the flavors local restaurants are offering.

According to the Power of Meat 2019, shoppers would like to see better prices for value-added products overall for meat, followed by greater assortment/availability. And it behooves retailers to sell these products: The report shows that for chicken, value-added products cost 28% more per pound. That number jumps to 64% for turkey.

Quality is what’s important when it comes to value-added proteins, says Kristy Welker, public relations and communications director for Minneapolis-based Mighty Spark, which offers chicken and turkey patties in six flavors and ground chicken and turkey in plain and flavored. The company’s core customers are millennials and Gen Zers, who “don’t want to cook,” she says. 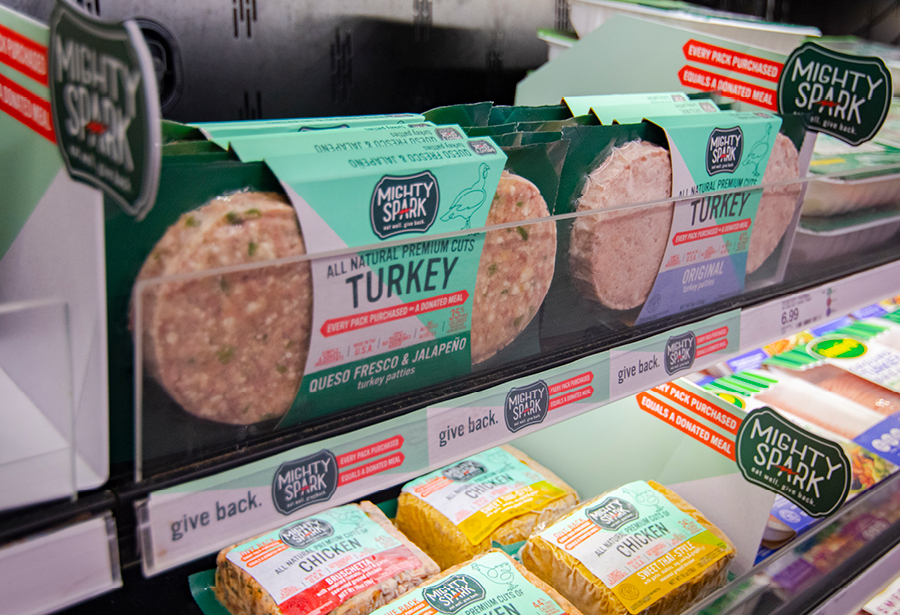 Mighty Spark products are in grocery stores and launched in Walmart this fall. “The goal is to have all the products together in the fresh poultry set,” Welker says, “so it makes more impact.”

The products are typically introduced to new stores with price cuts and coupons to drive trial, she says. Mighty Spark also does some initial sampling, cooking the product on the shop floor to build awareness.

“Any time we can put food in the mouths of shoppers, it is a win,” says Roerink of 210 Analytics.

Turkey is known as the centerpiece of the Thanksgiving table, but the turkey industry is working to overcome that by using value-added products to make it an everyday protein, says Anne-Marie Roerink, principal with 210 Analytics. “It will have variety and be known for something beyond the holiday table, as well as convenience,” she says.

Turkey has also benefited from the health halo that surrounds chicken, especially ground turkey, which is often positioned as a healthier alternative to ground beef, Roerink says.

Whole turkeys saw a double-digit decline in 2018, whereas ground turkey has become a staple, says Chris DuBois, SVP of strategic accounts for IRI. However, he says, ground turkey will have to “reinvent and push new flavors to attract younger shoppers,” due to the growth of plant-based diets and the search for excitement.

Butterball, based in Garner, N.C., is also letting its customers see behind the scenes. “[Consumers] are looking for turkey raised with no antibiotics ever, organic options, humanely raised turkeys, clean labels and overall better-for-you selections that fit their healthy lifestyle,” says Kyle Lock, senior director of retail marketing.

The company offers all of these options, and it recently revamped its packaging “to clearly communicate the most important product benefits right [out of] the gate,” Lock says.