Continue to Site >>>
Edit
The McKean family welcomed visitors to their Mercer, Pa., farm on Oct. 3 for a barn painting celebration honoring the community behind the Certified Angus Beef brand and its ranching heritage. Photograph courtesy of Certified Angus Beef.

Few symbols represent vintage Americana like a barn, where farm life is centered from generation to generation, including that of family farmers and ranchers Greg and Peggy McKean, owners and managers of Mercer, Pa.-based McKean Bros., who are representative of this heritage.

To commemorate the McKeans’ legacy of raising Angus cattle, Wooster, Ohio-based Certified Angus Beef rustled up family, friends and guests in early October to share a meal and behold the unveiling of the beef brand’s freshly painted logo on their barn.

The McKeans’ western Pennsylvania barn was the 37th stop on CAB’s cross-country #BrandtheBarn tour to 40 farms in 2018 as part of the brand’s 40th anniversary, for which it honored the family farmers and ranchers who have supported it since its start in 1978. 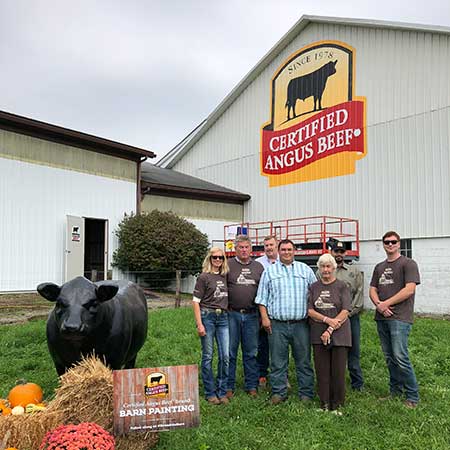 The hand-painted CAB barn logos take two to three days from start to finish, and they represent “a tangible symbol of the valuable, and interconnected, roles our partners play in guiding the Certified Angus Beef brand from farm to table,” said Tracey Erickson, CAB's VP of marketing. “It’s an honor for us to join the family farmers and ranchers who have always been at the heart of this brand while honoring our roots.”

Fourth-generation Angus cattle farmer/rancher Greg McKean and his wife, Peggy, raised four sons on their homestead, teaching them the values needed to care for the livestock. “Taking care of the animals is the highest priority of our family,” said Peggy McKean. “I could tell you stories of late nights or missed basketball games, because there was a cow in labor.”

But it’s a labor of love for the couple, whose unmistakable passion for their vocation is immediately evident—even during a brief visit to their scenic, 1,000-acre farm. Greg McKean, whose family roots are tied to meat processing and independent grocery stores, oversees the entire beef production process, from pasture to plate. The first Angus cattle that founded McKean’s herd was purchased in 1914 by Frank Woods, Greg’s maternal great-grandfather. The cornerstone cattle created the foundation for the Angus breeders, which evolved through the years, until 1972, when Greg’s parents, Bob and Peggy, bought the original 250-acre farm. 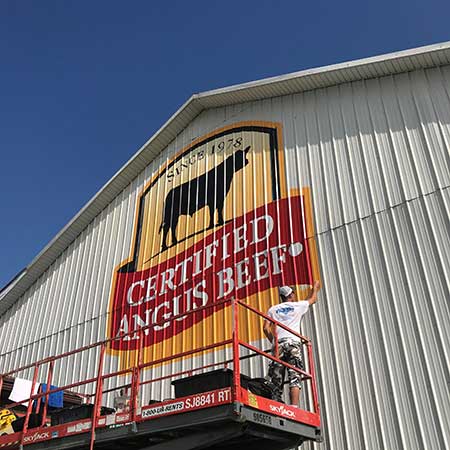 “Painting the brand’s familiar logo on 40 barns across America isn’t just an old-school marketing approach, but a tip of the hat to the farmers and ranchers who created the brand in 1978 and lead it today,” said CAB spokeswoman Crystal Meier.

CAB commissioned Troy Freeman of Springfield, Ill.-based Free Sky Studios to paint the barns on its whistle-stop tour, which began the week of Jan. 15 at Baldwin Angus Ranch in Ocala, Fla., and which will conclude in the coming weeks at Angus farms near the brand’s headquarters. An experienced mural and large-scale painter for businesses, cities and townships, amusement parks, schools, residences and more, Freeman has illustrated 15 books and previously owned a graphics and web design company.