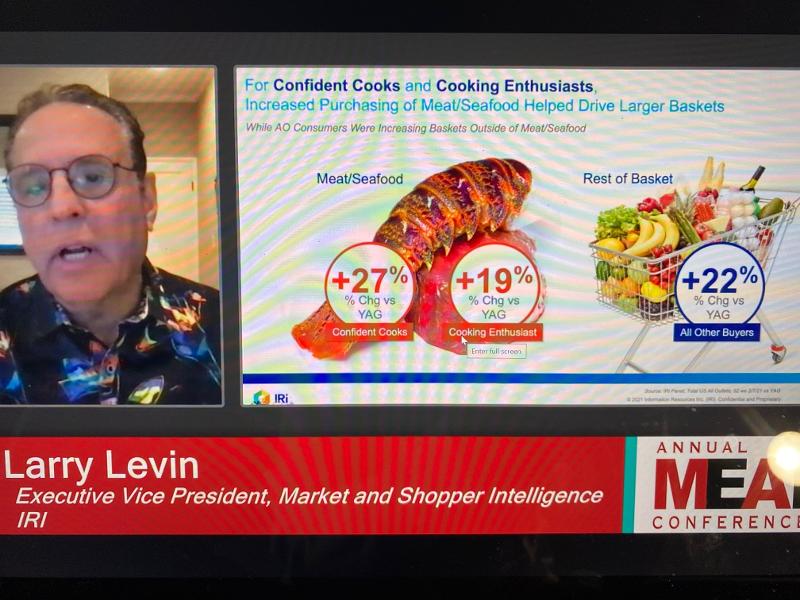 That consumers have bought more, and more expensive, meat and seafood during the COVID-19 pandemic is widely known fact. And with restaurants closed to indoor dining at various points and consumers seeking to scoop up whatever they could find in meat cases, it was perhaps unsurprising to see sales of pricier and lower-volume proteins climb. But a year into the pandemic, who has continued to drive proteins' powerhouse performance?

It's not necessarily who supermarkets think, IRI's Larry Levin and Chris DuBois said on the closing day of the 2021 Annual Meat Conference.

"Is this just rich people buying more stuff?" DuBois, SVP of protein practice for IRI, said during a presentation on the "stickiness" of pandemic-driven consumer behavior changes. "No," he answered, noting that consumer willingness to trade up to more-expensive cuts and meat/seafood varieties is occurring in lower-income households, as well. "It's not about expensive products; it's about making my life easier."

And whether that's via single-portion packaging, semi-prepared or heat-and-eat offerings, or proteins specifically marketed and merchandised as a way to bring a restaurant-quality experience home, consumers across demographics and income categories are increasingly willing to splurge, said DuBois and Levin, EVP of business development for IRI. "Premiumization does not start and stop with people who have money," he said—and that's part of why the trend is likely to stick around for at least the next two to four years.

What meat and seafood counters' best customers have in common is a genuine interest in cooking—and growing confidence in their kitchen skills. Ninety-seven percent of sales growth in meat can be attributed to two consumer profiles: "confident cooks" and "cooking enthusiasts," Levin said.

Many, thought not all, of those in the most kitchen-confident category are higher-income; they also are more likely to have older children, identify as African American or Hispanic, have larger households and be located in urban markets, especially in the eastern half of the country, he added.

The average consumer purchased 10.6 different types of meat at the grocery store over the course of a year pre-COVID, Levin said, citing IRI data. Now, those consumers in the "confident cooks" category purchase 18.4 types. "Cooking enthusiasts" are exploring more, too, expanding their repertoire to 13 or 14 different meat cuts/varieties.

That's a huge opportunity for retailers, Levin and DuBois suggested. Consumers who have broadened their protein horizons, splurging on items such as beef tenderloin, skirt steak and lobster tails, aren't likely to contract that focus in their post-pandemic grocery store purchases. They've realized they can prepare a high-quality steak at home for one-third the cost of a restaurant meal and pair that steak with a premium bottle of wine, Levin said. (Or maybe a whiskey cocktail—younger consumers were twice as likely to have chosen premium liquors in 2020.)

But it's incumbent upon retailers to make that connection for them and help them create the meal they seek, Levin and DuBois said. Online, shoppable recipes not only offer convenience for consumers, but also they let retailers better measure the success of the individual items and recipes they're presenting. In store, butchers become analogous to pharmacists, Levin said—they're the ones guiding unsure consumers about how to use, with confidence, the new-to-them items they're purchasing.

Cooking enthusiasts and confident cooks like to challenge themselves, and "people like to bring a party home," said Levin. Maybe it's trying a recipe they saw on TikTok or Instagram or seeking out recipes they've never ventured to make at home but are willing to try with the help of their new air fryer or pressure cooker—whatever the case, their cooking curiosity isn't likely to disappear. Dollars will return to restaurants especially in the second half of 2021 and beyond, both analysts said, but it would be a mistake to write off the growth that meat and seafood departments have seen in the past year as a situational blip.

"Don't lose them," DuBois said. "These groups are the key to driving growth in the meat department this year to next."