Continue to Site >>>
Edit
Photograph courtesy of Beyond Burger

That statement, from a recent report from Innova Market Insights, Crawley, U.K., should quell any doubt that retailers who promote plant-based products can harvest new sales from shoppers focused on health and wellness.

“Gravitation toward plant-based diets in general, along with interest in vegan, vegetarian and flexitarian lifestyles and concerns over animal welfare, have together served to increase interest [in plant-based products],” Innova Market Insights says.

The size and scope of the plant-based marketplace paint a very green picture of future eating trends.

According to a 2017 consumer research study from St. Petersburg, Fla.-based HealthFocus International, 60% of consumers say they are cutting back on meat-based eating, while 17% of those ages 15 to 70 say their diets are predominantly plant-based. Of those who reported cutting back on animal-based proteins, 55% say the change is permanent, and 22% hope it is, HealthFocus research shows.

8.1% Increase in sales of plant-based food in the U.S. in the past year

And the future looks bright: Gen Xers and millennials—two demographic groups vital to retailers now and in the years to come—are fueling the move toward plant-based dining. “Millennials, in particular, have been a driving force in this space where, according to Mintel, an estimated 60% of those between 18 and 34 years of age are trying to eat more plant-based proteins,” says Chuck Muth, chief growth officer of Beyond Meat, maker of The Beyond Burger.

Consumer demand for products in the plant-based protein category began to accelerate across the dairy and meat categories in 2012, with plant-based meats really taking off in the past year, Muth says.

Gen Xers and millennials—two demographic groups vital to retailers now and in the years to come—are fueling the move toward plant-based dining.

“Sales of plant-based food in the U.S. went up by 8.1% during the past year, topping $3.1 billion, according to Nielsen,” says Muth, who points out that the refrigerated plant-based meat category—led by The Beyond Burger—registered even more impressive numbers: In the U.S., that category grew by 25%, Muth says.

“Overall global growth of plant-based meat substitutes is expected to register a compound annual growth rate of 8.4% during the forecast period 2015-2020, according to Allied Market Research,” he says.

While plant-based meat alternatives get much of the attention these days, the dairy alternatives market is also growing, says Lu Ann Williams, director of innovation for Innova Market Insights.

More plant-based milk beverages, along with cultured products such as yogurt, frozen desserts and ice cream, have been added to traditional dairy lines, Williams says.

According to Innova Market Insights’ consumer research, one in three U.S. consumers increased consumption of plant-based milk/yogurt in the two years ending Dec. 31, 2017. Spoonable nondairy yogurt had a 48% CAGR for the 2013-2017 period, while global sales of dairy alternative drinks are set to reach $16.3 billion this year, the company reports.

Whatever the ingredients, it is the look and taste of the products that ultimately matter most to consumers.

Just what actually is in the meat and dairy alternative products heating up grocery retail today?

The range of ingredients used for meat substitutes includes vegetables and grains, as well as traditional sources such as v and specialist manufactured brands such as Quorn and Valess, Innova Market Insights reports. In the dairy realm, Williams says there’s been an increasing variety of nonsoy plant-based ingredients, including cereals such as rice, oats and barley. “We also noticed an increase in nuts, such as almonds, hazelnuts, cashews, walnuts and macadamias, as well as coconut and more unusual options such as lupin, hemp and flaxseed,” she says.

Whatever the ingredients, it is the look and taste of the products that ultimately matter to consumers. 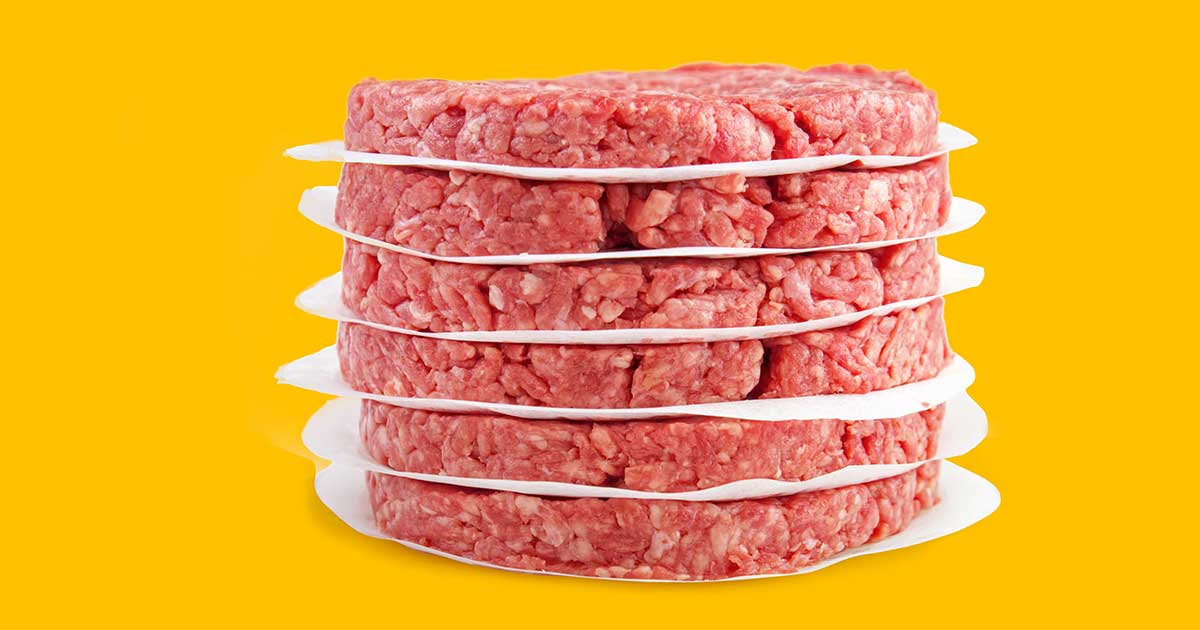 “The emergence of brands like The Beyond Burger and Sausage that closely replicate the look, texture, smell and taste of their animal-based counterparts has helped change the way consumers view plant-based meats,” Muth says. “That, in turn, has expanded the category reach beyond traditional vegan and vegetarian consumers by encouraging meat reducers or flexitarians to include these foods into their diet.”

As Alison Rabschnuk, director of corporate engagement for the Good Food Institute, told the Institute of Food Technologists (IFT) in a story in Food Technology magazine, “People who are eating plant-based foods today know how great the best ones taste. This is important because the vast majority of people make their food choices based on taste, price and convenience. As companies are able to produce plant-based products at scale, price and convenience will also improve.”

It might seem that natural/specialty grocers would be the best place for consumers to shop for plant-based food items. Recent data shows that isn’t necessarily true.

In order to be a vegetarian, you don’t need to spend your whole paycheck at a specialty grocer.”
—inMarket

In the study Where Do Vegetarian-Leaning Consumers Shop for Groceries?, location-intelligence company inMarket, Venice, Calif., looked at which major U.S. grocery chains people shopped for meat alternatives such as Beyond Meat, Morningstar and Quorn. The chains were ranked on their attractiveness to consumers based on a combination of purchase history and visitation patterns from January to May 2018.

“In order to be vegetarian, you don’t need to spend your whole paycheck at a specialty grocer,” the survey concluded.

In fact, inMarket found, “Shoppers who purchase meat alternatives are more likely to visit mainstream grocers when compared to the U.S. baseline.” Vons, Publix Super Markets, Sprouts Farmers Market, Kroger, Whole Foods Market and Trader Joe’s ranked as the top six grocery chains vegetarians are most likely to visit, according to the survey.

That’s good news for all grocery retailers who want to tap into the trend of plant-based eating. 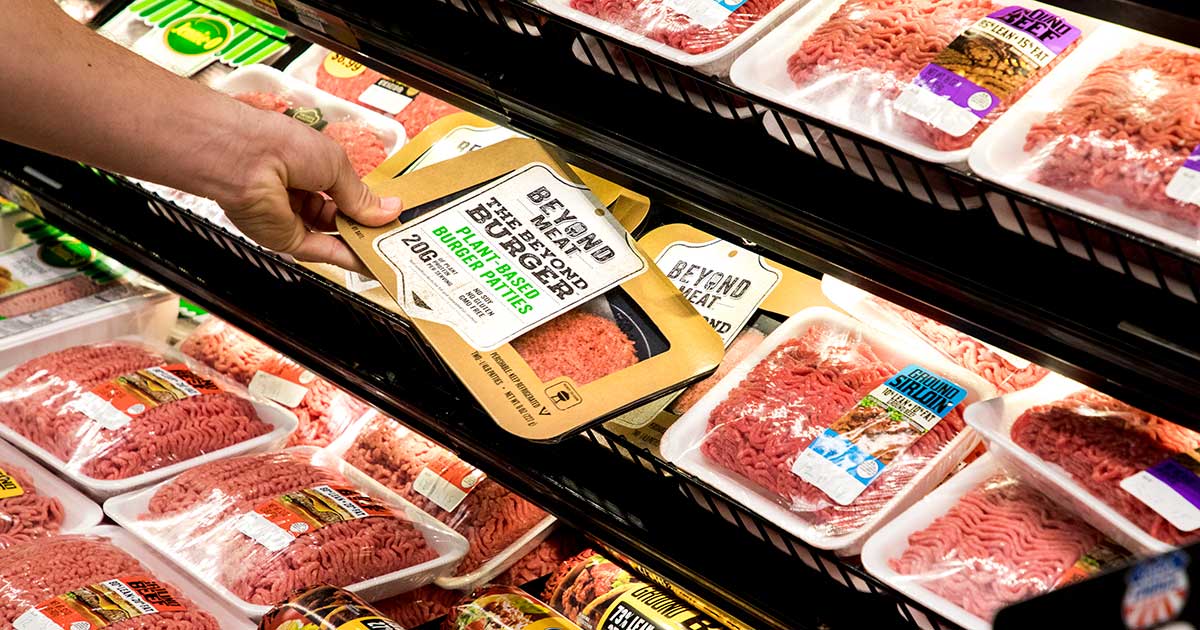 “We have seen very strong acceptance by both natural and conventional retailers,” says Muth, who points out that the Beyond Meat brands are sold in the refrigerated meat section next to their animal-based counterparts.

“Our point of view is the Beyond Meat brands are an extension of animal meats and provide consumers healthier center-plate protein options in the place where meat reducers or flexitarians shop for these items,” Muth says. “This approach to merchandising has been highly successful and well received by retailers and shoppers.”