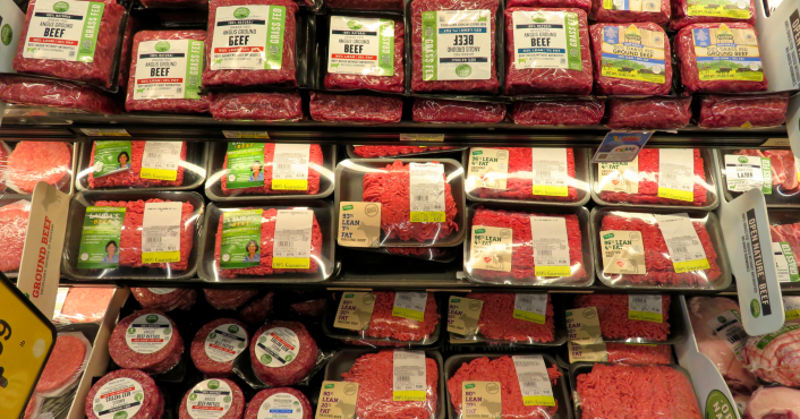 Where's the beef? In the past year, you could find it in almost any discussion of rising food prices.

As of January 2022, retail beef and veal prices were up 16% year over year, according to the Bureau of Labor Statistics. That included price increases of 13% for ground beef, 17% for steaks and more than 19% for roasts.

Those hot price hikes for beef were significantly higher than the also-red-hot inflation seen across grocery categories at the beginning of the year: Grocery prices in January were 7.4% higher than they were at the start of 2021, almost matching the 7.5% inflation seen in the overall U.S. economy.

On the wholesale front, the numbers were even more head-turning. Beef producer prices were up a whopping 43.9% year over year in January, the Bureau of Labor Statistics reported, and prices climbed 6.5% in the month of January alone over December levels. Producers now are watching to see what further pricing pressure and supply-chain disruption could result from Russia's invasion of Ukraine, which could have far-reaching impacts on animal feed supplies.

Coupled with some lingering product scarcity that shoppers are finding in meat cases, what all of this has meant for consumers is a pullback on meat purchases. Echoing the story for other fresh proteins, fresh beef saw dollar sales climb (up 6.9% in January 2022, year over year) but volumes fall (down 6.5%) in the past year, according to data from market researcher IRI. Ground beef on its own fared somewhat better, with volume sales only off 4.3% vs. January 2021 levels and dollar sales up 13.6% to $1.2 billion.

Ninety-five percent of consumers polled by IRI in January said they were concerned about food inflation, and more than 4 in 10 said they're extremely concerned.

Against that backdrop, "We are finding there is downshifting going on," IRI President of Client Engagement KK Davey told WGB earlier this year in an interview. "It’s still subtle," he said, "but sales in meat categories [for example] are coming back to the pre-COVID norms. We are seeing people shifting among the categories—from red meat to some less-expensive meat, for instance."

In 2020, some 98% of U.S. households purchased traditional meat products, according to data from FMI and the Meat Institute, and while consumers have upped their trial of plant-based alternatives in the past two years, Americans' appetite for traditional burgers and steaks remains strong. But whereas many consumers treated themselves to pricier cuts of beef (where they could find them) in 2020—including at the holidays, as gatherings were smaller and home-based and presented an opportunity to venture beyond traditional turkeys and hams—the increasingly inflationary environment of the past six months has prompted a renewed focus on value.

In January, the Beef Checkoff Program said that a recipe for Classic Beef Meatloaf—popular for its "preparation ease, affordability and number of servings it yields"—led the list of most-viewed recipes on BeefItsWhatsForDinner.com. The Beef Checkoff touted other options featuring shredded or ground beef or smaller portions of beef given equal billing with other ingredients (e.g., in salads, stuffed peppers or tacos) as other budget-friendly choices.

With meals at home still representing a more-affordable alternative to dining out, and more than 80% of meals prepared at home as of January, according to IRI, opportunity remains to build beef sales and help consumers use their pandemic-acquired kitchen tools and cooking skills. For retailers and suppliers, though, this will require further creativity on the meal-solutions and merchandising fronts—just as consumers themselves are embracing budget-focused creativity and nostalgia. Taco salad, anyone?