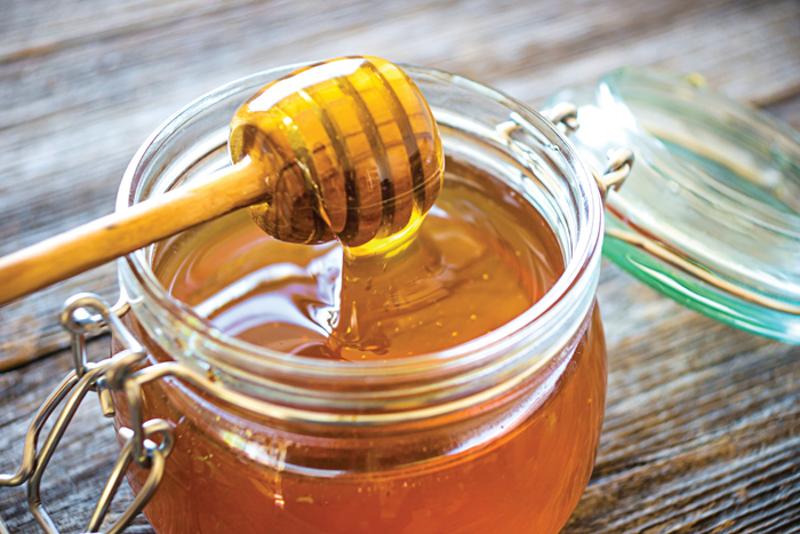 Here is the latest buzz on the sweetener front: It seems more and more people are getting their sugar fix from those old-fashioned, healthier, all-natural sources—honey and maple syrup.

“Honey has been around for thousands of years and is still growing with a three-year growth rate averaging five percent,” says A.J. Aumock, global market leader for the Truvia brand, at Cargill, based in Wayzata, Minn.

According to IRI, a Chicago-based market research firm, for the 52-weeks ended Sept. 4, sales of shelf-stable honey were more than $595.2 million, an increase of 7.1 percent, while unit sales totaled almost 106 million jars, an increase of 4.3 percent. With an average dollar ring of $5.63 (up 15-cents from the previous year) that is a sweet addition to the bottom line.

Once limited to roadside fruit stands and gift shops, small local brands of honey are making a beeline into supermarkets as retailers seek local and artisan products that appeal to Millennial consumers and help set them apart from big chains and mass merchandisers. However, according to IRI, private label is still the biggest brand classification with sales totaling $269 million, while the leading national brand is Sue Bee with $41.8 million in sales, followed by Golden Blossom Honey, with $20.7 million.

Supermarket operators can increase their honey sales by cross-merchandising it in other areas of the store—like the cheese case, say industry observers.

“As a general rule, honey and cheese pairings are not that hard,” says Christine Clark, assistant manager of education at Murray’s Cheese, the New York-based cheese shop that also operates kiosks in some 300 Kroger stores across the country. “At our flagship Bleecker Street store we don’t have honey above the cheese case, but in Kroger we generally merchandise honey over the bleu cheese, because bleu cheese is one of the strongest cheeses and honey tends to smooth out the harsher notes. That is a great way to merchandise.

“In the classes I teach at Murray’s, up to 30 percent of the participants think they hate bleu cheese, but when we pair it with honey or caramel the sweetness will really make it palatable for them. Honey is really helpful for getting acquainted with cheese,” Clark adds.

“Honey is not like wine, which has tannins that can bring out the bitterness in cheese,” Clark says, noting that darker honeys, such as buckwheat and chestnut, have a stronger, more intense flavor than their lighter brethren, like clover or orange.

“The average consumer doesn’t know the difference flavor-wise between clover honey and buckwheat honey, so having little flavor- describing words on the signage or visibly on the bottle is helpful in teaching the consumer how to pair,” Clark says.

Where honey is sourced from is also important. According to observers, research shows that consumption of locally sourced honey may help combat allergies. However, many mainstream supermarket brands contain honey from China and other questionable sources.

“Our No. 1 point is that our products are 100 percent U.S.A., with the exception of our organic honeys, which by necessity come from Brazil,” says Bill Huser, vice president, research and development, at Sioux Honey Association, the Sioux City, Iowa-based beekeeper marketing cooperative that produces the Sue Bee brand.

“Buying American honey not only supports the U.S. beekeeper, but also much of the U.S. agricultural community because the honeybees making U.S. honey are also pollinating U.S. crops from avocados to zucchini and just about everything in between,” Huser says.

Sue Bee’s organic honey is sourced from Brazil because a bee’s range is a three-mile circumference and there is not enough virgin land in the U.S., Huser says. “In order for honey to be organic there can’t be any disqualifying land use practices within a three-mile radius for each beeyard and in that circle there cannot be any landfills, highways, GMO fields, fertilized fields, golf courses, etc. In the U.S. there are very few places that meet that criteria.”

Cargill officials are looking to sweeten the appeal of honey with its new Truvia Nectar, a lower calorie blend of honey and stevia merchandised in the baking aisle. “When you put a blend of stevia with honey you intensify the sweetness, which means a serving size is smaller and has fewer calories,” says Aumock. “Truvia Nectar has the same taste of honey with half the calories per serving. A teaspoon of sugar has 16 calories, while one-half teaspoon of Truvia Nectar has eight calories, and both offer one serving of sweetness.”

Stevia does not mask flavor, so “the honey flavor comes through loud and clear,” Aumock says while having the same viscosity as honey.

Cargill is advertising Truvia Nectar via an FSI coupon this fall, as well as in-store activities in Publix and other chains, and a “pre-roll” 15-second digital web commercial geo-demographically targeting consumers living near stores where Truvia Nectar is sold.

Like honey, maple syrup is also witnessing a renaissance of sorts. According to IRI, for the 52-week period ended September 4, category sales of maple/pancake and waffle syrup were $685.9 million, a decrease of 1.0 percent, with unit sales of more than 195 million, a decrease of 2.3 percent. But the bright spot in the category are the real maple syrup brands, with sales of Anderson’s, Maple Gold and Maple Grove Farms all up in the double digits.

“Most of the other national brands are buying the majority of their syrup in Canada and repackaging it in the U.S.,” Anderson says, noting a telling sign is the “product of U.S. and/or Canada” stamped on the bottle. “About 15 years ago we made the decision not to take in any Canadian syrup. The U.S. market was growing as far as producers, so there was more U.S. syrup available. It separated ourselves from the competition and made it easier for us to check on our producers,” he says. “We primarily get our syrup from the Midwest, but we have some producers we buy from in other parts of the country as well.”

Another key difference is that Anderson’s syrup is boiled before it is bottled. “We bring every batch back to a boil and put it in the bottle, so we are packaging our syrup in our bottles a good 20 to 30 degrees hotter than everyone else,” Anderson says. “That not only makes a really solid seal, but also locks in some freshness. Maple syrup tastes really fresh for the first two or three months after it’s been made and then it just kind of evens off,” he says.  “By boiling it again we kind of lock that freshness in the bottle.”

There is a huge taste difference between pure maple syrup and the big national pancake and waffle syrup brands, Anderson notes. “There were some brands that had two percent maple syrup in them, but I think they have all taken it out completely,” he says.

An extra benefit is that maple syrup is becoming known for its health benefits.

“There is a lot of good information coming out,” Anderson says. “Our industry is doing research on the health benefits of maple syrup versus corn syrups and other sweeteners. There is lots of research that still has to be done, but there are 54 antioxidants in maple syrup. Old timers in our industry will say, ‘of course maple syrup is good for you. We lived to be 100 and all we did was drink maple syrup.’”